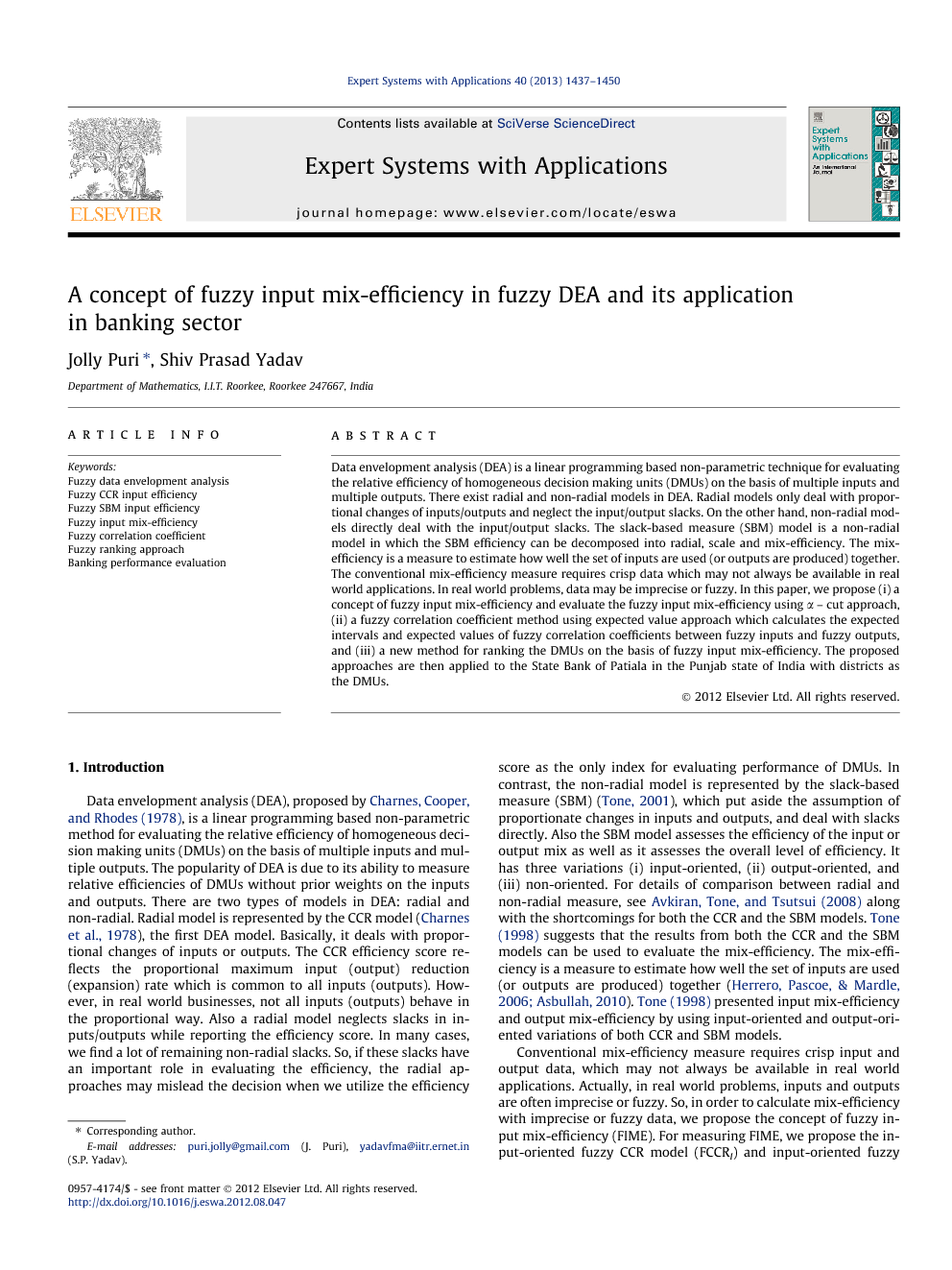 Data envelopment analysis (DEA) is a linear programming based non-parametric technique for evaluating the relative efficiency of homogeneous decision making units (DMUs) on the basis of multiple inputs and multiple outputs. There exist radial and non-radial models in DEA. Radial models only deal with proportional changes of inputs/outputs and neglect the input/output slacks. On the other hand, non-radial models directly deal with the input/output slacks. The slack-based measure (SBM) model is a non-radial model in which the SBM efficiency can be decomposed into radial, scale and mix-efficiency. The mix-efficiency is a measure to estimate how well the set of inputs are used (or outputs are produced) together. The conventional mix-efficiency measure requires crisp data which may not always be available in real world applications. In real world problems, data may be imprecise or fuzzy. In this paper, we propose (i) a concept of fuzzy input mix-efficiency and evaluate the fuzzy input mix-efficiency using α – cut approach, (ii) a fuzzy correlation coefficient method using expected value approach which calculates the expected intervals and expected values of fuzzy correlation coefficients between fuzzy inputs and fuzzy outputs, and (iii) a new method for ranking the DMUs on the basis of fuzzy input mix-efficiency. The proposed approaches are then applied to the State Bank of Patiala in the Punjab state of India with districts as the DMUs.

In view of the fact that precise input and output data are not always available in real world applications, we have developed, in this paper FIME model. For measuring the FIME, we have proposed the FCCRI and FSBMI. These two FDEA models have been formulated as linear programming models using α-cut approach for ease of solution and implementation. To ensure the validity of the FDEA model specification, we have proposed a fuzzy correlation coefficient method using expected value approach which calculates the expected interval and expected value of fuzzy correlation coefficient between fuzzy inputs and fuzzy outputs. If positive inter-correlations are found, the inclusion of the fuzzy inputs and fuzzy outputs is justified. Further, a new ranking method based on defuzzification approach has been developed for comparing and ranking DMUs in terms of FIME, which provides not only a full ranking but also the information that to what degree a FIME is bigger than another one. All of the proposed approaches have been applied to evaluate the performances of seventeen districts of SBOP in the Punjab State of India in terms of FIME. It is shown that Ludhiana district is the most efficient district in terms of View the MathML sourceθ˜Ik, View the MathML sourceρ˜Ik and View the MathML sourceψ˜Ik. The highest and lowest levels of fuzzy mix-inefficiency have been seen for Patiala (32.4734 %) and Ferozepur (1.579 %) respectively. The input mix-inefficiency represents the degree to which the input mix should change to become fully efficient. According to the findings of our study, all the fuzzy input mix-inefficient districts are suggested to decrease their input mix in order to become fully efficient.