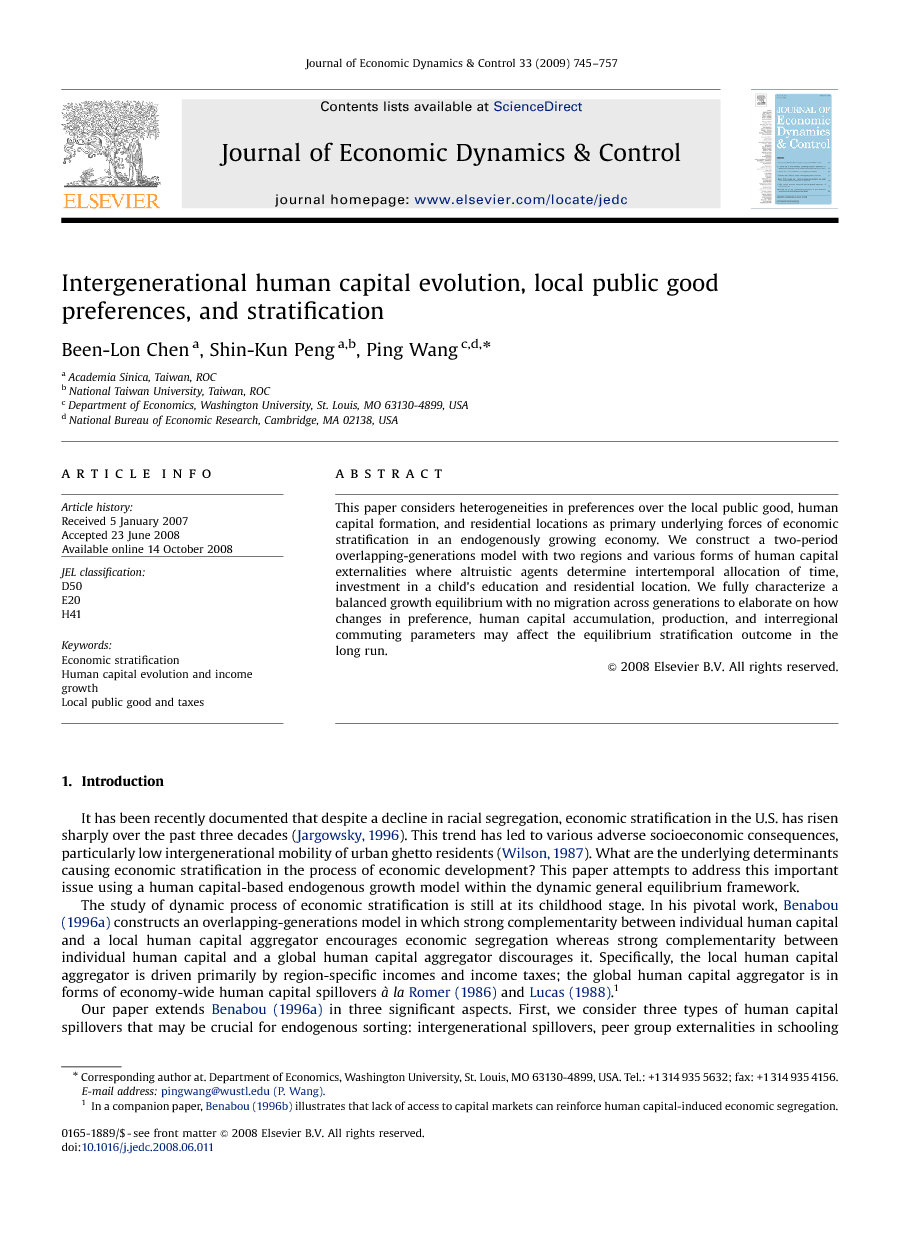 This paper considers heterogeneities in preferences over the local public good, human capital formation, and residential locations as primary underlying forces of economic stratification in an endogenously growing economy. We construct a two-period overlapping-generations model with two regions and various forms of human capital externalities where altruistic agents determine intertemporal allocation of time, investment in a child's education and residential location. We fully characterize a balanced growth equilibrium with no migration across generations to elaborate on how changes in preference, human capital accumulation, production, and interregional commuting parameters may affect the equilibrium stratification outcome in the long run.

It has been recently documented that despite a decline in racial segregation, economic stratification in the U.S. has risen sharply over the past three decades (Jargowsky, 1996). This trend has led to various adverse socioeconomic consequences, particularly low intergenerational mobility of urban ghetto residents (Wilson, 1987). What are the underlying determinants causing economic stratification in the process of economic development? This paper attempts to address this important issue using a human capital-based endogenous growth model within the dynamic general equilibrium framework. The study of dynamic process of economic stratification is still at its childhood stage. In his pivotal work, Benabou (1996a) constructs an overlapping-generations model in which strong complementarity between individual human capital and a local human capital aggregator encourages economic segregation whereas strong complementarity between individual human capital and a global human capital aggregator discourages it. Specifically, the local human capital aggregator is driven primarily by region-specific incomes and income taxes; the global human capital aggregator is in forms of economy-wide human capital spillovers à laRomer (1986) and Lucas (1988).1 Our paper extends Benabou (1996a) in three significant aspects. First, we consider three types of human capital spillovers that may be crucial for endogenous sorting: intergenerational spillovers, peer group externalities in schooling and peer group externalities in production. Second, we endogenize both parents’ investment decision in children's education and students’ education effort and allow these decisions to interact with each other. This interaction is crucial because the former will interact with peer group externalities in schooling, while the latter will only interact with peer group externalities in production via education-work trade-off. Both decisions will in turn affect the equilibrium sorting outcome. Third, we include heterogeneous preferences for the local public good (LPG) service as a source of economic segregation.2 This inclusion is interesting because preferences for the LPG and human capital factors may reinforce each other, jointly influencing the likelihood of economic stratification in the long run. Specifically, we construct a two-period overlapping-generations economy with two regions where altruistic agents differ ex ante in their preferences over the LPG, inherited human capitals, and initial residential locations. In addition to inherited human capital and parental investment in her education, a young agent may enhance her human capital by devoting greater effort to schooling, though it is at the expenses of reducing her work effort. An old agent allocates her after-tax income to consumption, investment in her child's education and commuting. The LPG facility is financed solely by local income taxes and established in one of the two regions; those who reside in another region must incur an interregional commuting cost in order to enjoy the LPG service. Thus, an agent optimizes to determine her consumption, educational choice, investment in her child's education, and her residential location when old. We will characterize a balanced growth equilibrium along which there is no migration across generations and consumption, human capital and output are all growing at constant rates. We find that heterogeneous preferences for the LPG are important sources of economic stratification along a balanced growth path (BGP). Provided that LPG preferences are heterogeneous, the balanced growth equilibrium is completely integrated if the local income tax rate differential is sufficiently small or sufficiently large. When the tax rate differential takes intermediate values, agents are completely stratified where those with higher preference bias toward the LPG reside in the region containing the public facility. With weak parental altruism or intergenerational human capital spillovers, economic stratification is more likely to remain in the long run and intergenerational mobility is low. Similar results arise when the individual schooling effort effect in human capital accumulation is less essential and the schooling peer group effect in production is less important. Additionally, when interregional commuting is more costly, economic stratification is more likely to be sustained.

We have examined the conditions under which the balanced growth equilibrium is integrated or stratified. With heterogeneous preferences for the LPG, economic stratification requires that the local income tax rate differential fall in an intermediate range. We also point out that the sustainability of economic stratification (or intergenerational immobility) depends crucially on parental altruism, intergenerational human capital spillovers, the influence of individual schooling effort on human capital accumulation, the peer group effect of schooling effort, and interregional commuting. Along these lines, there are at least two interesting avenues for future research. One is to characterize the dynamic evolution of the locational equilibrium to analyze the short-run transition of intergenerational mobility. In particular, some determinants mentioned above may have stronger short-run effects while others may be more influential in the long run. Another is to use voting to determine endogenously the local tax rate in each region given the provision of the LPG (as in Konishi, 1996; Nechyba, 1997) or the number of LPG sites given the tax schedules (as in Berliant et al., 2006). An important question to inquire is whether this political equilibrium mechanism may reinforce economic stratification and reduce the degree of intergenerational mobility.