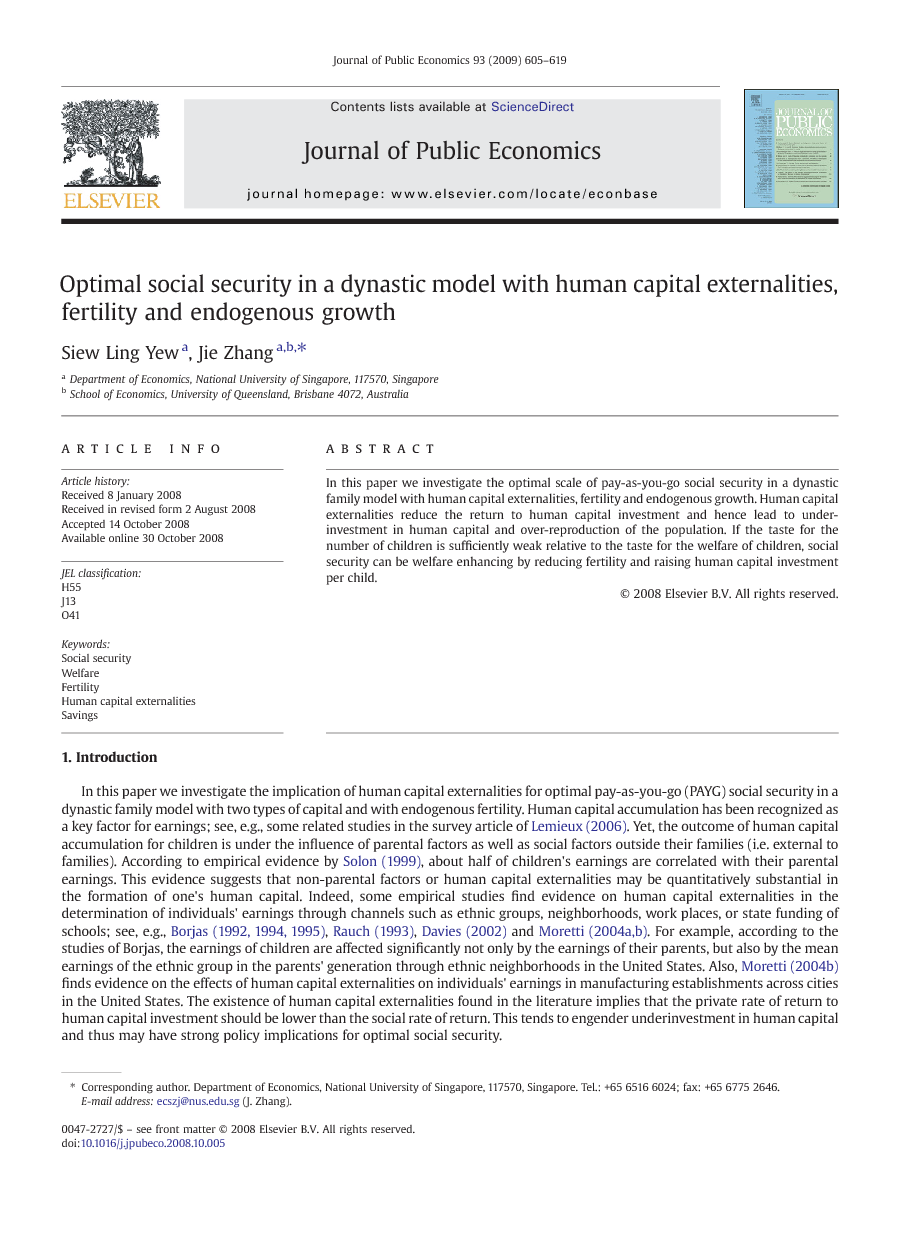 In this paper we have examined the welfare implication of social security by incorporating life-cycle savings, bequests, human capital investment and fertility in a dynastic family model. In achieving this, we have overcome difficulties in tracking down the entire equilibrium path of capital accumulation and deriving an explicit solution for the welfare level with both human and physical capital. We have shown analytically that scaling up PAYG social security improves welfare when there are externalities under the same condition it reduces fertility and raises capital intensity, until reaching an optimal tax rate. Quantitatively, for an externality in the range of ε from ε = 0.85 to ε = 0.7, our model can generate optimal social security contribution rates in a range of 12%–22%. This is very much in line with the actual range of the contribution rates in many industrial countries. In terms of the underlying driving forces, our results hinge on assumptions of altruistic intergenerational transfers, human capital spillovers and endogenous fertility. Whether the results in this paper are useful contributions depends on whether these assumptions are plausible. Among them, the assumption of endogenous fertility follows the Beckerian approach. As a necessary condition for PAYG social security programs to mitigate the efficiency loss of the human capital externality, the negative response of fertility to social security is consistent with empirical evidence in some existing studies such as Cigno and Rosati (1992) and Zhang and Zhang (2004). The human capital externality works through the trade-off between the number and the quality of children, implying a below optimal level of human capital investment per child and an above optimal level of fertility. This differs from the implication of the investment externality explored in Zhang and Zhang (2007) that leads to suboptimal investment in physical capital and suboptimal fertility. Both types of externalities have received some supporting empirical evidence in the literature; their relative significance is an empirical task and awaits future research. If both externalities are present at the same time, we expect the results to remain similar qualitatively in the sense that they render a welfare improving role for unfunded social security. However, the results may differ quantitatively because of their different impacts on human capital accumulation, physical capital accumulation and fertility. Among these driving forces, the assumption of altruistic intergenerational transfers in dynastic families is more controversial since there are different views and evidence with regard to the existence or the form of altruism among family members in different generations. Though the related literature is inconclusive, some of the existing empirical studies have found supporting evidence for intergenerational altruism. Such a combination of these factors has not been used in the welfare analysis of social security, to the best of our knowledge. Thus, our results are complementary to Cooley and Soares (1999) that justifies why PAYG social security receives a majority support once it has already been put in place in an overlapping-generations model with selfish agents. Unlike their results, our model can also explain why social security has been instituted in many countries in the first place. While we focus on social security in this paper, there are other fiscal instruments that can also mitigate the efficiency loss of the human capital externality. These additional instruments include subsidies on education investment and taxes on the number of children. Since the competitive solution differs from the social planner's solution in two dimensions in our paper (fertility and human capital investment), using the conventional education subsidy alone cannot eliminate the efficiency loss of the human capital externality to reach the social planner allocation. Moreover, taxes on the number of children have hardly been practiced in Western countries. In fact, poor families with many children have often been provided with financial assistance from social programs, which can be traced back to the early 19th century in England (see, e.g., Boyer, 1989). Population aging in the last several decades has created financial pressure on maintaining a balanced budget for PAYG social security programs in many countries. Different proposals for social security reform have emerged. Some of them aim at replacing pay-as-you-go social security with compulsory retirement savings in individual accounts. For instance, there was a failed referendum in New Zealand in 1997 calling for establishing a compulsory individually-based retirement savings scheme, which was regarded as a substitute for its public pension. The policy implication of our analysis in this paper is a call for caution against reform plans that abandon pay-as-you-go social security or reduce its scale significantly. In developed countries, population aging has been driven by two factors: below-replacement fertility rates and falling mortality rates. Our present paper abstracts from the second factor. For population aging driven by a permanent decline in fertility (caused by factors other than social security), our numerical results suggest that little change in the optimal contribution rate for PAYG social security may be made in the presence of the human capital externality. Indeed, many reform proposals try to keep the contribution rates at today's level and only change the “design” of the pension system such as strengthening the funded component or weakening the intragenerational redistribution. According to Zhang (1995), however, an inframarginal funded pension component is neutral if the benefit is linked to one's own contribution, whereas it has a positive effect on fertility and negative effects on human capital investment and growth if the benefit is independent of one's own contribution. In either case of the relationship between pension benefits and contributions for an individual, the funded component is not useful to mitigate the efficiency loss caused by human capital externalities in this model. Finally, reducing intragenerational redistribution makes social security benefits more dependent on one's own contribution. According to Zhang and Zhang (2003), this stronger linkage of benefits to contributions at an individual level makes it more likely for PAYG social security to raise human capital investment and the growth rate and reduce fertility. Therefore, reducing intragenerational redistribution is likely to make PAYG social security more effective in mitigating the efficiency loss of the human capital externality.