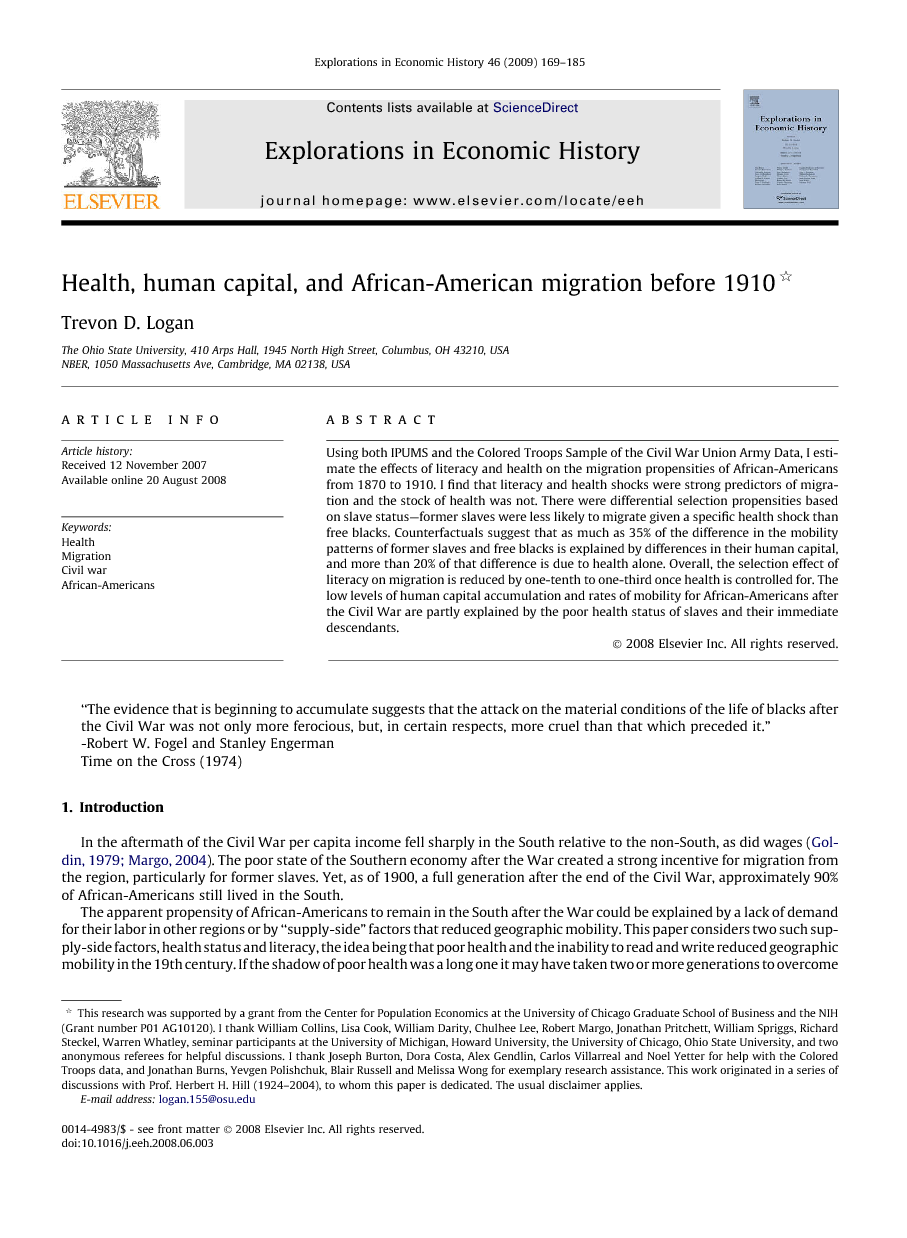 Using both IPUMS and the Colored Troops Sample of the Civil War Union Army Data, I estimate the effects of literacy and health on the migration propensities of African-Americans from 1870 to 1910. I find that literacy and health shocks were strong predictors of migration and the stock of health was not. There were differential selection propensities based on slave status—former slaves were less likely to migrate given a specific health shock than free blacks. Counterfactuals suggest that as much as 35% of the difference in the mobility patterns of former slaves and free blacks is explained by differences in their human capital, and more than 20% of that difference is due to health alone. Overall, the selection effect of literacy on migration is reduced by one-tenth to one-third once health is controlled for. The low levels of human capital accumulation and rates of mobility for African-Americans after the Civil War are partly explained by the poor health status of slaves and their immediate descendants.

In the aftermath of the Civil War per capita income fell sharply in the South relative to the non-South, as did wages (Goldin, 1979 and Margo, 2004). The poor state of the Southern economy after the War created a strong incentive for migration from the region, particularly for former slaves. Yet, as of 1900, a full generation after the end of the Civil War, approximately 90% of African-Americans still lived in the South. The apparent propensity of African-Americans to remain in the South after the War could be explained by a lack of demand for their labor in other regions or by “supply-side” factors that reduced geographic mobility. This paper considers two such supply-side factors, health status and literacy, the idea being that poor health and the inability to read and write reduced geographic mobility in the 19th century. If the shadow of poor health was a long one it may have taken two or more generations to overcome the cumulative negative health effects of slavery and its aftermath, partially explaining the low mobility rates of African-Americans after the Civil War. Given the harsh working conditions of the plantation system and its general level of violence, long migrations may have been physically difficult for large portions of the ex-slave population, even children born near the end of the antebellum era (Steckel, 1986a, Steckel, 1986b, Steckel, 1986c and Steckel, 2004). Even more, the poor childhood health of slaves may have affected their ability to accumulate large amounts of human capital after Emancipation and could have long-lived consequences on future generations both through the transmission of low socioeconomic status itself and subsequent poor health for slave descendents (Fogel, 1994, Case et al., 2002, Steckel, 2004, Costa, 2005, Case and Paxson, 2006 and Costa et al., 2007). New research has shown that blacks were consistently shorter than whites during the antebellum period, and that the heights of blacks actually declined during Reconstruction (Carson, in press), so the potentially negative effects of poor health on slave outcomes may have been even more pronounced for the first generation born outside of chattel slavery. Subsequent generations of African-Americans may have been particularly sensitive to the effects of health on the acquisition of human capital. Until recently, researchers could only use Census records to estimate migration propensities for African-Americans during the late 19th century. Census estimates indicate that more educated blacks were more likely to migrate than those who were less educated (Woodson, 1918, Hamilton, 1959, Shryock and Nam, 1965, Leiberson, 1978, Margo, 1988, Margo, 1990, Tolnay, 1998 and Bernstein, 1998). I use IPUMS data not available to earlier scholars and confirm those results—migration and education were positively correlated from 1870 to 1910, and disproportionate shares of black migrants were literate. Using a new data source, the Colored Troops sample of the Union Army Veterans data, I estimate the effects of education and the stock and flow of health on the migration propensities of African-Americans.1 I find that literacy was a strong predictor of migration for African-American Civil War veterans, but that controlling for shocks to health experienced during the Civil War significantly reduces the effect. Overall, the impact of literacy on migration decreases by one-tenth to one-third once health factors are controlled for. Perhaps more intriguing, I find that both the presence and effects of health shocks during the war varied by slave status. Not only were slaves shorter than free blacks, but even after controlling for height slaves were more likely to experience a health shock (such as illness) during the war and were less likely to be literate afterwards. Health shocks for former slaves had a larger impact on migration propensities than for free blacks. Counterfactuals suggest that as much as 35% of the difference between the mobility patterns of former slaves and free blacks is explained by differences in their human capital, and more than 20% of that difference is due to health alone. The poor health status of African-Americans both during and after slavery had a negative impact on the acquisition of human capital and mobility of African-Americans. The shadow of slavery and Reconstruction on the economic outcomes of African-Americans may be longer than previously thought once the persistent effects of poor health are considered.

The story of educational selection in African-American migration has neglected the potential confounder of health. In this paper I have shown that controlling for health shocks experienced pre-migration, the effect of literacy on migration is decreased substantially. As much as one-third of what we would term “educational selection” actually reflects the influence of other factors, many of which had their beginnings in the antebellum era. While educational selection is still present, and much more pronounced for slaves than for free blacks, the degree and magnitude of the decrease due to the inclusion of health shocks suggest that health status should begin to play a more prominent role in the discussion. The findings presented here have shown that the effects of slavery did have an impact on the ability of blacks to accumulate human capital. In fact, the evidence we now have available suggest that the estimates drawn from the CTS may be understatements of the effect. African-Americans born immediately after Emancipation had even lower living standards than those born in the late antebellum era. Carson (in press), for example, presents the first evidence yet of the biological living standard for blacks born after the Civil War. Even allowing for problems with the data and the considering the fact that his sample is drawn from prison records, he finds that biological measures such as height actually declined substantially for blacks and whites in the Reconstruction era, which is consistent with the argument made by Fogel and Engerman (1974). This trend does not begin to reverse itself until the Reconstruction era is over. If we take and extend the results we obtain from the CTS to those of lower heights who were born later, the effects of poor health on mobility and economic outcomes would probably be larger since the general African-American population was probably in poorer health than the troops. Remarkably, the generation born after 1890, when the heights reported by Carson begin to rise, would have been the prime age movers during the Great Migration that began 25 years later. While this conclusion is highly speculative, to the extent that the generation born immediately after Emancipation was in poorer health than the generation that preceded it, we should expect relatively low levels of human capital accumulation and of migration for African-Americans far after the end of chattel bondage. As the general health of the African-American population recovered after 1890, mobility and the accumulation of human capital would coincide as children born in that era came of age. The results presented here suggest that the effects of slavery on subsequent African-American health and economic outcomes may have taken several generations to run their course, and may be a key determinant in the convergence of black and white economic outcomes in the early and mid twentieth century.