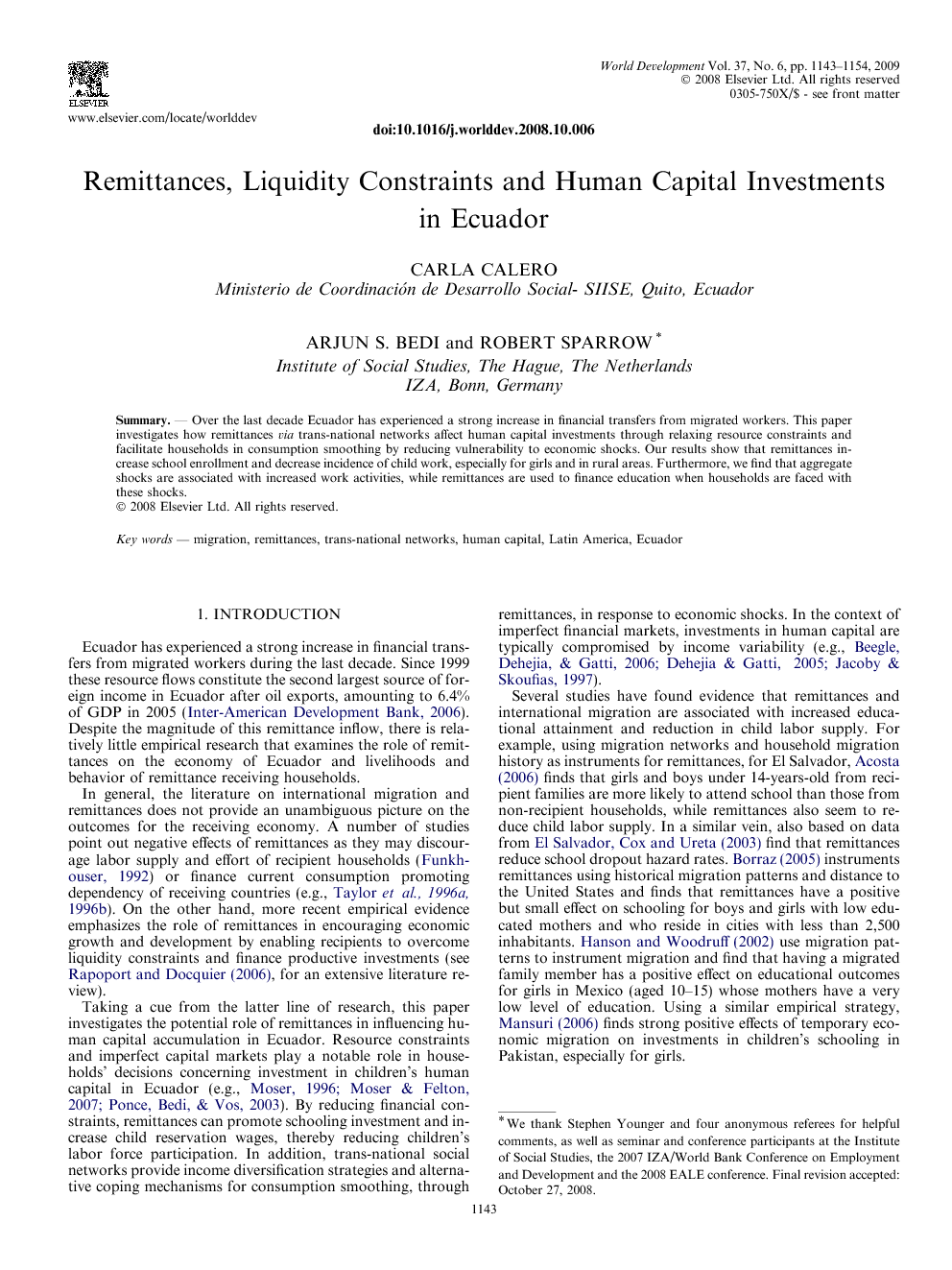 Over the last decade Ecuador has experienced a strong increase in financial transfers from migrated workers. This paper investigates how remittances via trans-national networks affect human capital investments through relaxing resource constraints and facilitate households in consumption smoothing by reducing vulnerability to economic shocks. Our results show that remittances increase school enrollment and decrease incidence of child work, especially for girls and in rural areas. Furthermore, we find that aggregate shocks are associated with increased work activities, while remittances are used to finance education when households are faced with these shocks.

During the last decade, Ecuador has experienced a large increase in financial transfers from international migrants. The scale of the transfers offers an opportunity to analyze the effect of remittances on human capital formation. In particular, through its exploration of the effect of remittances on school enrollment and child work and the role of remittances in mitigating vulnerability to economic shocks, this paper brought together two strands of the literature. The main contribution of this paper is that we provide empirical evidence on the role of remittances as a source for investment in human capital, and the role of remittances and trans-national networks as mechanisms that preserve human capital investments when households are faced with income volatility. Identification relied on instrumental variables, which exploit information on source countries of remittances and regional variation in the availability of bank offices that function as formal channels for sending remittances. These instruments capture information on transfers costs and accessibility to channels of transmission, which partly determine the volume and frequency of funds transferred, while they are not expected to affect school enrollment and child labor. Over-identifying restrictions test results and sensitivity analyses are consistent with the validity of the instruments. Our results showed that remittances increase school enrollment, in particular for girls and in rural areas. To a lesser extent remittances also reduced child labor supply. We further found that especially aggregate shocks are associated with increased work activities. Schooling, on the other hand, did not seem sensitive to shocks, suggesting that households employ other coping mechanisms rather than compromise human capital investments. Besides increasing school enrollment, remittances affected the choice of school type. We found that remittances led to a net substitution from public to private schooling, hence increasing the quality of human capital investments in children. Not only do remittances provide a source for human capital investments, but trans-national networks also function as insurance mechanism, as we found that remittances are used to maintain education when households are faced with economic shocks. This suggests that liquidity constraints and vulnerability to covariate risk are relevant for human capital accumulation of school age children, especially in rural areas. Within the context of uncertainty both child labor and remittances function as informal insurance coping mechanisms. A limitation of our study is that the data do not allow us to separate migration and remittance effects; that is, disentangle the effects of investment in trans-national networks (migration) and the returns from these networks (remittances). We intend to pursue this in future research, as well as to explore the endogenous relationship between household risk and remittances.