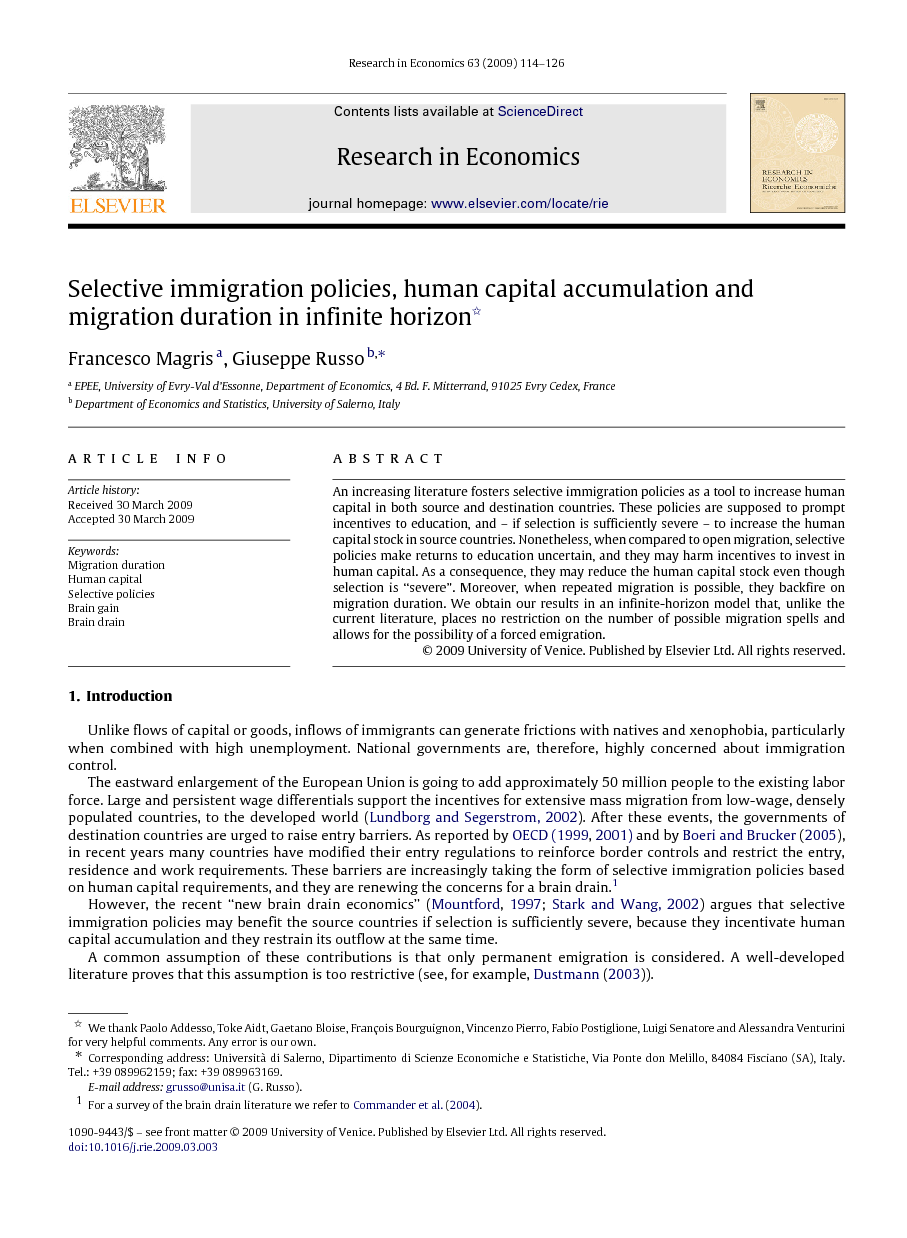 An increasing literature fosters selective immigration policies as a tool to increase human capital in both source and destination countries. These policies are supposed to prompt incentives to education, and–if selection is sufficiently severe–to increase the human capital stock in source countries. Nonetheless, when compared to open migration, selective policies make returns to education uncertain, and they may harm incentives to invest in human capital. As a consequence, they may reduce the human capital stock even though selection is “severe”. Moreover, when repeated migration is possible, they backfire on migration duration. We obtain our results in an infinite-horizon model that, unlike the current literature, places no restriction on the number of possible migration spells and allows for the possibility of a forced emigration.

The study of migration duration is receiving increasing attention, as well as the effect of the chances of migrating on human capital accumulation. In our work, we have attempted to connect these streams of literature. Our findings question the effectiveness of human-capital based selective policies. First, we reproduce in a more general and rigorous framework the result that border closure backfires on the optimal migration duration. Second, we stress the impact of crises on the decision to accumulate human capital and to stay abroad longer. Third, we conclude that selective policies are a double-edged weapon: they can both foster and harm the equilibrium level of human capital. With respect to open immigration, they make returns to human capital uncertain, and they can have ambiguous effects on education, by causing a “brain loss”, rather than a brain gain. This result suggests that selective immigration policies should not be used unconditionally, and that the logic behind the “brain gain with a brain drain” is not always correct. The policy implications of this finding are quite important. When the sign of View the MathML source∂h∗∂Ψ is different for different individuals, selective policies can increase human capital dispersion within a country. When the sign of View the MathML source∂h∗∂Ψ is different for different source countries, selective policies can increase cross-country human capital dispersion. This can have worrisome effects on the possibility of convergence in the long run. Finally, it is worth recalling that economic policies can affect pp: plans aimed to reduce macroeconomic risk in developing countries reinforce the incentives to return. Though it may be difficult to modify these characteristics of an economy, there are no theoretical reasons why international, coordinated development policies should be less effective or more costly than enforcing strict border closure.