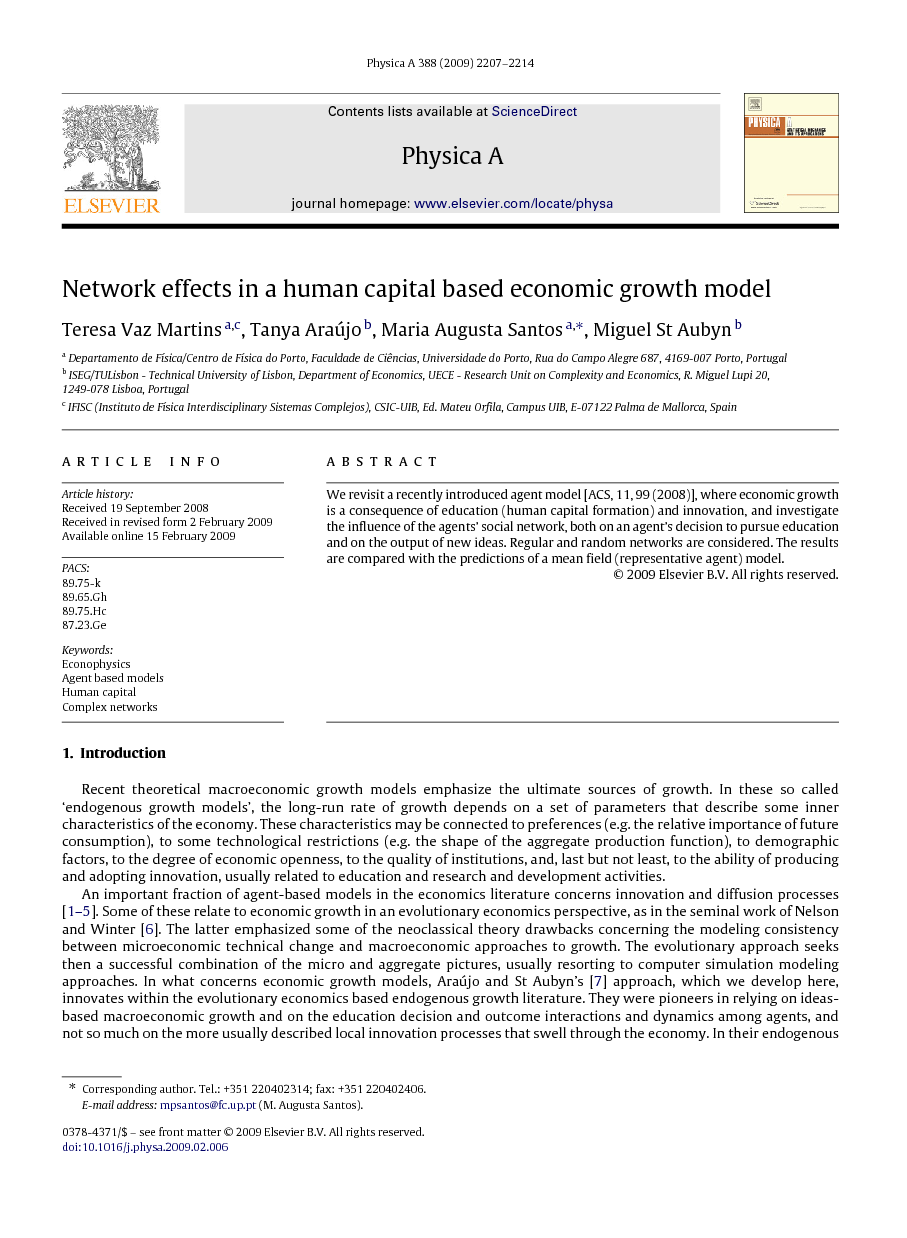 We revisit a recently introduced agent model [ACS, 11, 99 (2008)], where economic growth is a consequence of education (human capital formation) and innovation, and investigate the influence of the agents’ social network, both on an agent’s decision to pursue education and on the output of new ideas. Regular and random networks are considered. The results are compared with the predictions of a mean field (representative agent) model.

Recent theoretical macroeconomic growth models emphasize the ultimate sources of growth. In these so called ‘endogenous growth models’, the long-run rate of growth depends on a set of parameters that describe some inner characteristics of the economy. These characteristics may be connected to preferences (e.g. the relative importance of future consumption), to some technological restrictions (e.g. the shape of the aggregate production function), to demographic factors, to the degree of economic openness, to the quality of institutions, and, last but not least, to the ability of producing and adopting innovation, usually related to education and research and development activities. An important fraction of agent-based models in the economics literature concerns innovation and diffusion processes [1], [2], [3], [4] and [5]. Some of these relate to economic growth in an evolutionary economics perspective, as in the seminal work of Nelson and Winter [6]. The latter emphasized some of the neoclassical theory drawbacks concerning the modeling consistency between microeconomic technical change and macroeconomic approaches to growth. The evolutionary approach seeks then a successful combination of the micro and aggregate pictures, usually resorting to computer simulation modeling approaches. In what concerns economic growth models, Araújo and St Aubyn’s [7] approach, which we develop here, innovates within the evolutionary economics based endogenous growth literature. They were pioneers in relying on ideas-based macroeconomic growth and on the education decision and outcome interactions and dynamics among agents, and not so much on the more usually described local innovation processes that swell through the economy. In their endogenous growth model ideas or inventions are the main growth engine. These ideas are non-rival, in the sense that they can be used by some without diminishing the possibility of its use by others. Examples relevant to economic growth are easy to find — the power engine, electricity, or the computer come almost immediately to mind. Ideas are produced by skilled labor, as proposed by Jones [8]. Araújo and St Aubyn’s model, however, departs from the more conventional approaches in what concerns the way the skilled fraction of the labor force is determined. In their agent-based approach, individuals are subject to interaction or neighborhood effects, and the decision to become educated depends not only on an economic reasoning, but also on a degree of social conditioning. As it will become clear later, the skilled or educated share of the population is a key factor in what concerns the economy’s rate of growth. Networks of interacting agents play an important modeling role in fields as diverse as computer science, biology, ecology, economy and sociology. An important notion in these networks is the distance between two agents. Depending on the circumstances, distance may be measured by the strength of interaction between the agents, by their spatial distance or by some other norm expressing the existence of a link between the agents. Based on this notion, global parameters have been constructed to characterize the connectivity structure of the networks. Two of them are the clustering coefficient (CC) and the characteristic path length (CPL) or geodesic distance. The clustering coefficient measures the average probability that two agents, having a common neighbor, are themselves connected. The characteristic path length is the average length of the shortest path connecting each pair of agents. These coefficients are sufficient to distinguish randomly connected networks from ordered networks and from small-world networks. In ordered networks, the agents being connected as in a crystal lattice, clustering is high and the characteristic path length is large too. In randomly connected networks, clustering and path length are low, whereas in small-world networks [9] and [10] clustering may be high while the path length is kept at a low level. Starting from a regular structure and applying a random rewiring procedure (to interpolate between regular and random networks) it has been found [9] that there is a broad interval of structures over which CPL is almost as small as in random graphs and yet CC is much greater than expected in the random case and a small-world network is obtained. An alternative way to generate a small-world network is by adding a small number of random short-cuts to a regular lattice. A small characteristic path length and very high clustering are found in real social networks, together with a non-uniform distribution of node connectivities. Other distinctive features of this type of networks are positive degree correlations (assortative mixing) and the existence of a community structure [11] and [12]. In the present paper, we investigate the role of the network of interactions in the model introduced by Araújo and St Aubyn [7]. The aim is to clarify to what extent the conclusions of Ref. [7] depend on the simplified topology of agents interactions assumed in that work. We have simulated the model on networks with some of the features described above, namely on regular square lattices, classical random (Erdős–Rényi) graphs as well as small-world networks. An analytical study of the model, using a mean-field-like approximation, is also presented. The original model definitions and results are reviewed in the next section. In Section 3 we present the mean field results. Simulations on random networks are detailed in Section 4, and Section 5 is devoted to a discussion of the results. Conclusions are presented in the final section.

In this work we have studied a simple agent model [7] designed to explain how economic growth can be the result of innovation introduced by a fraction of the population with higher education. The original unidimensional model was generalized by assuming that agents interactions took place on a more realistic type of social network. The effect of assuming a heterogeneous interaction network may be summarized, in broad terms, as leading to a steady state with higher growth and qualification and a stronger segregation of skilled and unskilled individuals. As expected, this is specially notorious when team effects are considered, due to the shorter average distance between agents. We have also derived and solved a related mean field model, which is able to reproduce some important results of the original model (without team effect). Note, however, that the mean field approximation leaves out the steady state growth rate dependency on initial values. Also, by assuming heterogeneous agents, one is able to reproduce cluster formation and to take into account a team contribution. It will be interesting to consider a more microscopic version of the model, with heterogeneous salaries depending on the agent’s productivity (as well as on overall economic state). The artificial decision rule (5), may be replaced by the agent making his choice according to the sign of a local field, as usually done in models of social influence with binary decision [20]. The question is then how to relate agent variables to production and innovation in an economically sensible way.