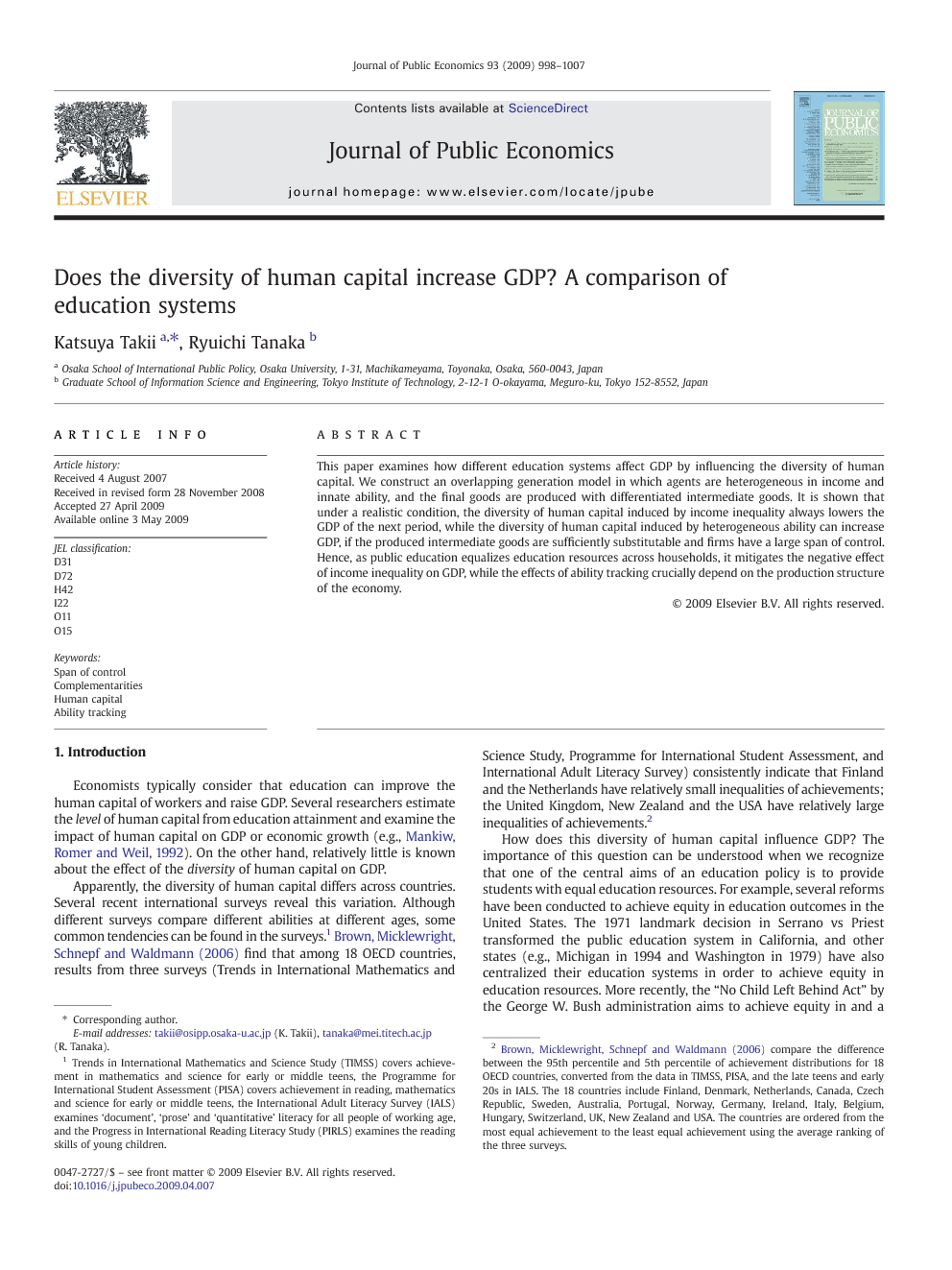 This paper examines how different education systems affect GDP by influencing the diversity of human capital. We construct an overlapping generation model in which agents are heterogeneous in income and innate ability, and the final goods are produced with differentiated intermediate goods. It is shown that under a realistic condition, the diversity of human capital induced by income inequality always lowers the GDP of the next period, while the diversity of human capital induced by heterogeneous ability can increase GDP, if the produced intermediate goods are sufficiently substitutable and firms have a large span of control. Hence, as public education equalizes education resources across households, it mitigates the negative effect of income inequality on GDP, while the effects of ability tracking crucially depend on the production structure of the economy.

In this paper, we examined how different education systems change GDP through their influence on the diversity of human capital. We analyze an economy in which an income distribution converges to a stationary distribution. We show that the diversity of human capital due to income inequality always lowers GDP, while diverse human capital induced by heterogeneous ability can increase GDP if produced goods are sufficiently substitutable and firms have a large span of control. Hence, we may conclude that tax financing of education always yields higher GDP than private financing, though the effect of ability tracking on GDP depends on the structure of industries and firms. We can consider several future studies. Firstly, although this paper focuses on the vertical diversity of human capital, it is also interesting to examine the impact of the horizontal variety on GDP. In fact, because each agent specializes in the production of a particular good, it would be possible to modify the model for the examination of horizontal diversity. In this case, a household can choose a particular variety of goods before making an investment decision about human capital and accumulating a specific skill. The advantages of this approach would be that a household might choose skills for the production of new goods. In this way, the expansion of the variety of goods can be endogenized as the result of education choice. This interesting extension is left for future research. Secondly, it may be interesting to examine a more general utility function. We assume that the utility function is log-separable. This simplifying assumption brings the result that the preferred tax rate does not depend on income. Therefore, we can ignore the effect of income distribution on tax choice. If the utility function is more general, the utility of a household with median income matters. This means that the skewness of income distribution influences the tax rate and therefore the amount of investment in human capital. Because a difference in education systems would influence the skewness of income distribution, this extension may add an additional mechanism. This interesting extension is also left for future research. Finally, although we examine the effect of ability tracking on GDP in this paper, we can extend our analysis to other policies that can change a mapping from ability to human capital. More specifically, we can extend our analysis to policies that influence the human capital accumulation function through the following path, ht + 1i = (ξt + 1i)ϕ(θ,p)((eti)θ(gt)1 − θ)α, where p is a policy parameter. For example, when policy allows individuals more flexibility in choosing how many credits they can take in a year, it is likely that talented students take more courses than ordinary students do.20 In this case, more able students accumulate a larger human capital not only because they are talented, but also because they study harder. Hence, the effect of ability on human capital is more than proportional and ϕ(θ, p) becomes larger by this policy. According to our analysis, the impact of this policy on GDP depends on the structure of production. In this way, our analysis suggests that we must evaluate the economic consequences of a liberal education policy with the knowledge of how industries and firms are organized. As indicated by this example, there will be more unexplored issues about the relationship between education policy and the structure of the production sector. We hope that this paper helps researchers in unraveling part of the complicated relationships.