عنوان انگلیسی
Dynamics of social trust and human capital in the learning process: The case of the Japan garment cluster in the period 1968–2005
دانلود فوری مقاله + سفارش ترجمه 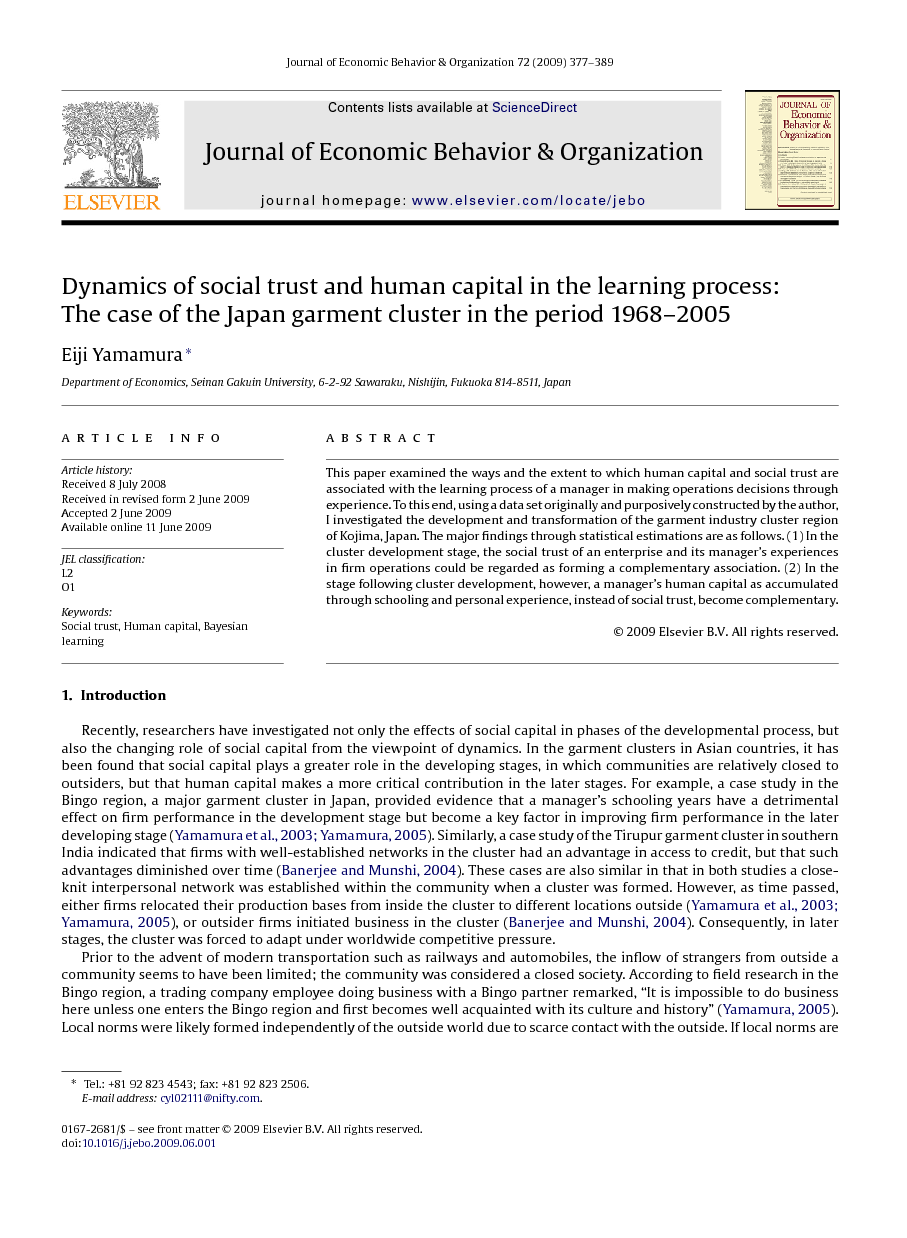 This paper examined the ways and the extent to which human capital and social trust are associated with the learning process of a manager in making operations decisions through experience. To this end, using a data set originally and purposively constructed by the author, I investigated the development and transformation of the garment industry cluster region of Kojima, Japan. The major findings through statistical estimations are as follows. (1) In the cluster development stage, the social trust of an enterprise and its manager's experiences in firm operations could be regarded as forming a complementary association. (2) In the stage following cluster development, however, a manager's human capital as accumulated through schooling and personal experience, instead of social trust, become complementary.

Recently, researchers have investigated not only the effects of social capital in phases of the developmental process, but also the changing role of social capital from the viewpoint of dynamics. In the garment clusters in Asian countries, it has been found that social capital plays a greater role in the developing stages, in which communities are relatively closed to outsiders, but that human capital makes a more critical contribution in the later stages. For example, a case study in the Bingo region, a major garment cluster in Japan, provided evidence that a manager's schooling years have a detrimental effect on firm performance in the development stage but become a key factor in improving firm performance in the later developing stage (Yamamura et al., 2003 and Yamamura, 2005). Similarly, a case study of the Tirupur garment cluster in southern India indicated that firms with well-established networks in the cluster had an advantage in access to credit, but that such advantages diminished over time (Banerjee and Munshi, 2004). These cases are also similar in that in both studies a close-knit interpersonal network was established within the community when a cluster was formed. However, as time passed, either firms relocated their production bases from inside the cluster to different locations outside (Yamamura et al., 2003 and Yamamura, 2005), or outsider firms initiated business in the cluster (Banerjee and Munshi, 2004). Consequently, in later stages, the cluster was forced to adapt under worldwide competitive pressure. Prior to the advent of modern transportation such as railways and automobiles, the inflow of strangers from outside a community seems to have been limited; the community was considered a closed society. According to field research in the Bingo region, a trading company employee doing business with a Bingo partner remarked, “It is impossible to do business here unless one enters the Bingo region and first becomes well acquainted with its culture and history” (Yamamura, 2005). Local norms were likely formed independently of the outside world due to scarce contact with the outside. If local norms are defined as local rules in a closed community, then local rules are limited within the community but not followed in the outside world.1 Local rules are based on conventions, which are judged from the inside of the community, not the outside (Sugden, 1989). Compared with these local rules, rules that are not limited to a particular area are called global rules.2 This presumably is why one must have much knowledge about the business conventions of a particular region to enter smoothly into business relationships. These business conventions, which cannot exist in the market in the sense of neoclassical economics, formed gradually though long-term and intensive personal interactions. These local rules and norms based on conventions obviously differ from the rules of transaction generally recognized by trading company employees. As such, knowledge about local rules and norms cannot be obtained through school education.3 Social capital is hence expected to make a contribution to firm growth. Nevertheless, economic development leads to environment change, which cluster firms must confront. Due to the extension of economic activity outside of communities and the new entrance of outsider firms, as observed in the cases of Bingo and Tirupur, the effectiveness of local rules gradually declines, while global rules become more effective, leading human capital to play a more important role in the improvement of firm performance. In this paper a simple learning model is employed, which also provides the basis for an empirical testable hypothesis concerning such an evolutionary process. The Kojima region was for a long time known as the largest garment cluster in Japan. Although at one time the region had scarce arable land and was a relatively less developed area, rapid economic growth occurred due to the emergence of garment clusters in the post-war period. More recently, however, the amount of output within the Kojima region has decreased due to the relocation of production to regions outside Kojima. For these reasons, the Kojima region is an appropriate target for investigating the different phases of the development process. Although I make use of available published production data at the enterprise level for about 40 years, namely covering the span of 1968–2005, there are limitations preventing a sufficiently thorough investigation of the development process in detail. To compensate for this limitation, I also conducted a number of field research trips to Kojima to collect original survey data from existing enterprises. Such data, comprised of published and original survey data, allowed me to conduct an empirical assessment of the effects schooling and social capital have on the learning process. I am concerned in this paper with the question of how the associations between social capital and human capital evolve, similar to the previously published case of Bingo (Yamamura, 2005). Environmental change in the garment industry seems to have become more distinct in the 21st century than ever before, but unfortunately, the Bingo garment cluster case did not cover this period, and thus it failed to sufficiently examine its stated hypothesis (Yamamura et al., 2003 and Yamamura, 2005). The data of the current study includes the previously missing period, allowing for a more appropriate investigation of the dynamic process of change in garment clusters. The organization of this paper is as follows. Section 2 provides a simple learning model on which the empirical analysis is based, and then postulates a testable hypothesis. A brief description of the data collection is then presented, and the developmental process of the Kojima region during the past 40 years is summarized in Section 3. Section 4 presents a regression model and discusses the results of the estimations. The final section offers concluding observations.

The key findings of this research are as follows. In the developing stage, under conditions constrained by local rules, which are regarded as the social norms, social capital was found to improve the learning effect. In the later developed stage, where a manager's decision making is not constrained by local rules, the association of social trust and learning is substituted, with the association of human capital and learning becoming complementary. Under conditions such as those faced by communities in developing countries where the market is still far from perfect and therefore does not sufficiently function, and where formal legal institutions have not yet been established, social capital among community members plays a relatively important role in mitigating problems caused by market imperfections and the scarcity of formal institutions (Hayami, 2001). Once formal institutions have been established allowing the market to sufficiently function, human capital plays comes to play a more important role than social capital. From this, the argument can be derived that it is critical to consider the institutional conditions associated with the degree of community development when the effects of social and human capital on economic growth are examined. Although the decline of the importance of social capital in the development process has been recently analyzed in theoretical research (Bartolini and Bonatti, 2008), some empirical studies have also attempted to show a decline in social capital (Putnam, 2000 and Costa and Kahn, 2003). However, little is known about the association of economic growth and social capital from a long term perspective (Hall and Jones, 1999, Knack, 2003, Knack and Keefer, 1997 and Zak and Knack, 2001). The contribution of this paper is therefore to help clarify, through original survey data, that the association between social capital, human capital and learning effects changes over time. The evidence provided in this research was limited to Japanese society, where informal rules appear to be relatively important and effective (Yamamura, 2008). The difference in the socio-cultural background between Japan and the United States is thought to have an influence on how people trust each other (Yamagishi et al., 1998). Here, the question arises of whether Asian countries are similar on the point that social capital leads to economic growth in the development stage. Findings from the case of Tirupur, India, indicate that this is indeed the case (Banerjee and Munshi, 2004). On the other hand, it was also been found that social capital cannot be considered the engine of industrial development in a case study of Indonesia (Miguel et al., 2005). These findings imply limitation to the argument derived from the Kojima case. That is, the socio-cultural background and features of each garment industry seem to be uniquely associated with the process of industrial development. The present research was limited to a particular area and industry, and the sample size of subjects used in the analyses was small. As such, the findings provided thus far cannot be generalized to a large degree. To better verify the generality of the arguments presented here, a comparable study of other areas with different socio-cultural backgrounds and other industries should be conducted using a larger sample size. These are remaining issues to be addressed in future studies.