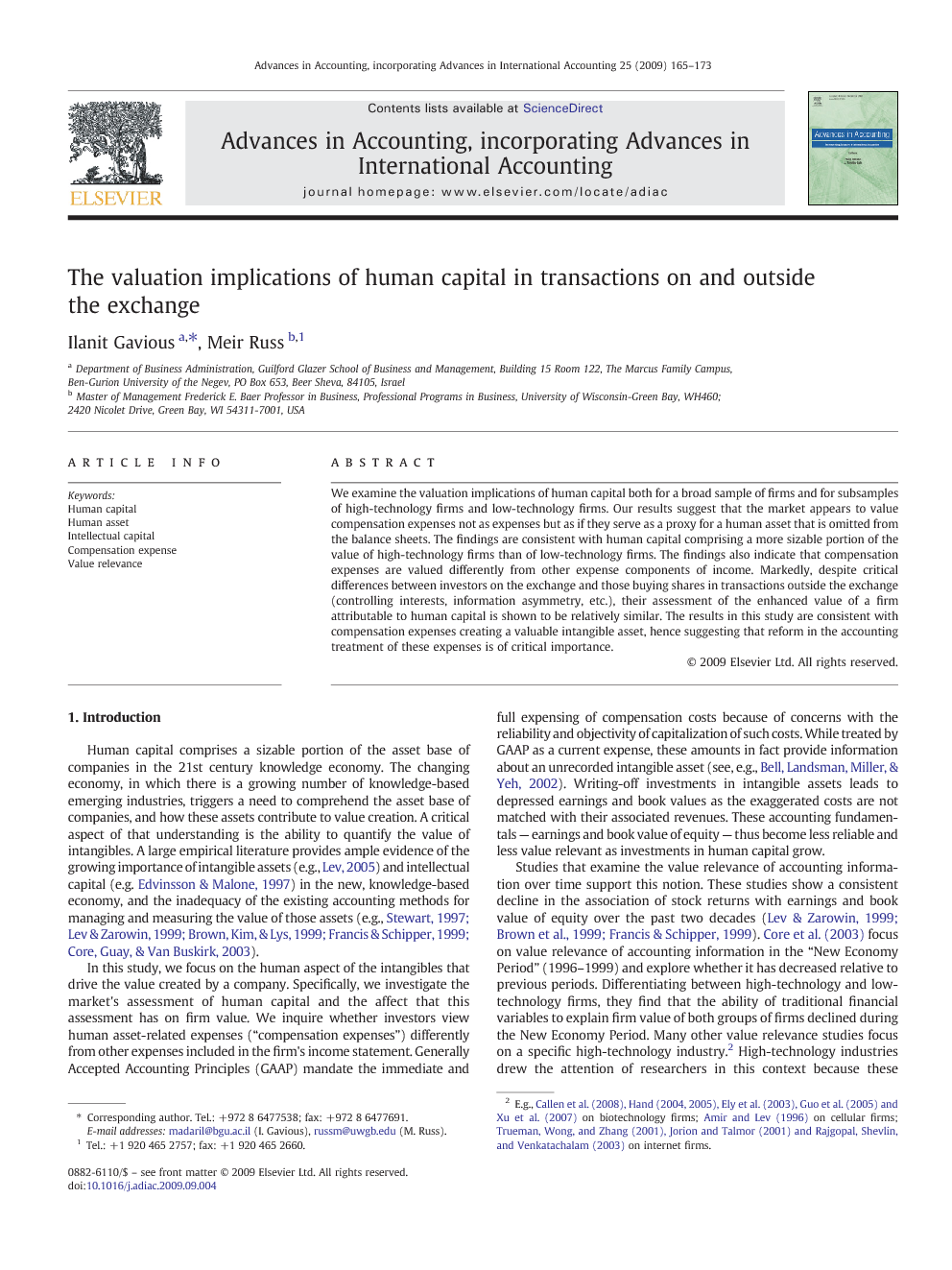 We examine the valuation implications of human capital both for a broad sample of firms and for subsamples of high-technology firms and low-technology firms. Our results suggest that the market appears to value compensation expenses not as expenses but as if they serve as a proxy for a human asset that is omitted from the balance sheets. The findings are consistent with human capital comprising a more sizable portion of the value of high-technology firms than of low-technology firms. The findings also indicate that compensation expenses are valued differently from other expense components of income. Markedly, despite critical differences between investors on the exchange and those buying shares in transactions outside the exchange (controlling interests, information asymmetry, etc.), their assessment of the enhanced value of a firm attributable to human capital is shown to be relatively similar. The results in this study are consistent with compensation expenses creating a valuable intangible asset, hence suggesting that reform in the accounting treatment of these expenses is of critical importance.

This paper examines the valuation implications of human capital both for a broad sample of firms and for subsamples of high-technology firms and low-technology firms. We find that, as hypothesized, the market appears to value compensation expenses as if they serve as a proxy for an unrecognized intangible asset. Compensation expenses are positively and highly significantly related to firm value in the full sample regression as well as in the subsamples. Furthermore, the results support the notion that human capital comprises a more sizable portion of the value of high-technology firms than of low-technology firms. When comparing the assessment of human capital by investors on and outside the exchange, we find that the two types of buyers assess the enhanced value of a firm attributable to human capital similarly, despite the important differences between these investors, which prior literature shows have significant value implications (controlling interests, information asymmetry, etc.). The evidence presented in the paper is consistent with compensation expenses creating a valuable intangible asset. Markedly, investors seem to see through the deficiencies of GAAP, and treat employee compensation, that is immediately expensed in income statements, as a value-increasing investment. This suggests that reform in the accounting treatment of compensation expenses is in place. Specifically, accounting standards should allow capitalization of all human asset-related expenses, and determine acceptable approaches or techniques for amortization of the contributed intangible asset. This might be even more important for the high-technology, fast-growing, knowledge-based industries where the value implications of human capital are significantly higher than in more traditional industries. The current research attempts to estimate the relationship between compensation expenses and value created in two different types of industries and in the context of mergers and acquisitions. Future research should further explore the exact type of relationship between compensation and value created. For example, a curvilinear relation would indicate that more is better up to a certain point (e.g., Ester & Kerkhofs, 2007). Another question of interest is the rate of depreciation on human capital (e.g. Kallunki et al., 2005), specifically, assessing different rates of depreciation for different environments and industries. For example, in high (low)-technology firms, the rate of depreciation should be higher (lower), since life of knowledge (e.g. Russ & Jones, 2008) and product life cycles (e.g. Gardner, Johnson, Lee, & Wilkinson, 2000) in the former are shorter. Lastly, Schmidt and Dharan (2004) offered a typology of intellectual assets' exploratory models while recommending moving human capital valuation studies toward a more rigorous approach to research. Within their framework, our study would be identified as an association model, which is the first step in understanding the phenomenon. We join their call for a need to move the research of human capital valuation towards models that are more detailed and descriptive, and as such would provide more managerial insights in regard to creating and managing human assets more effectively and efficiently.