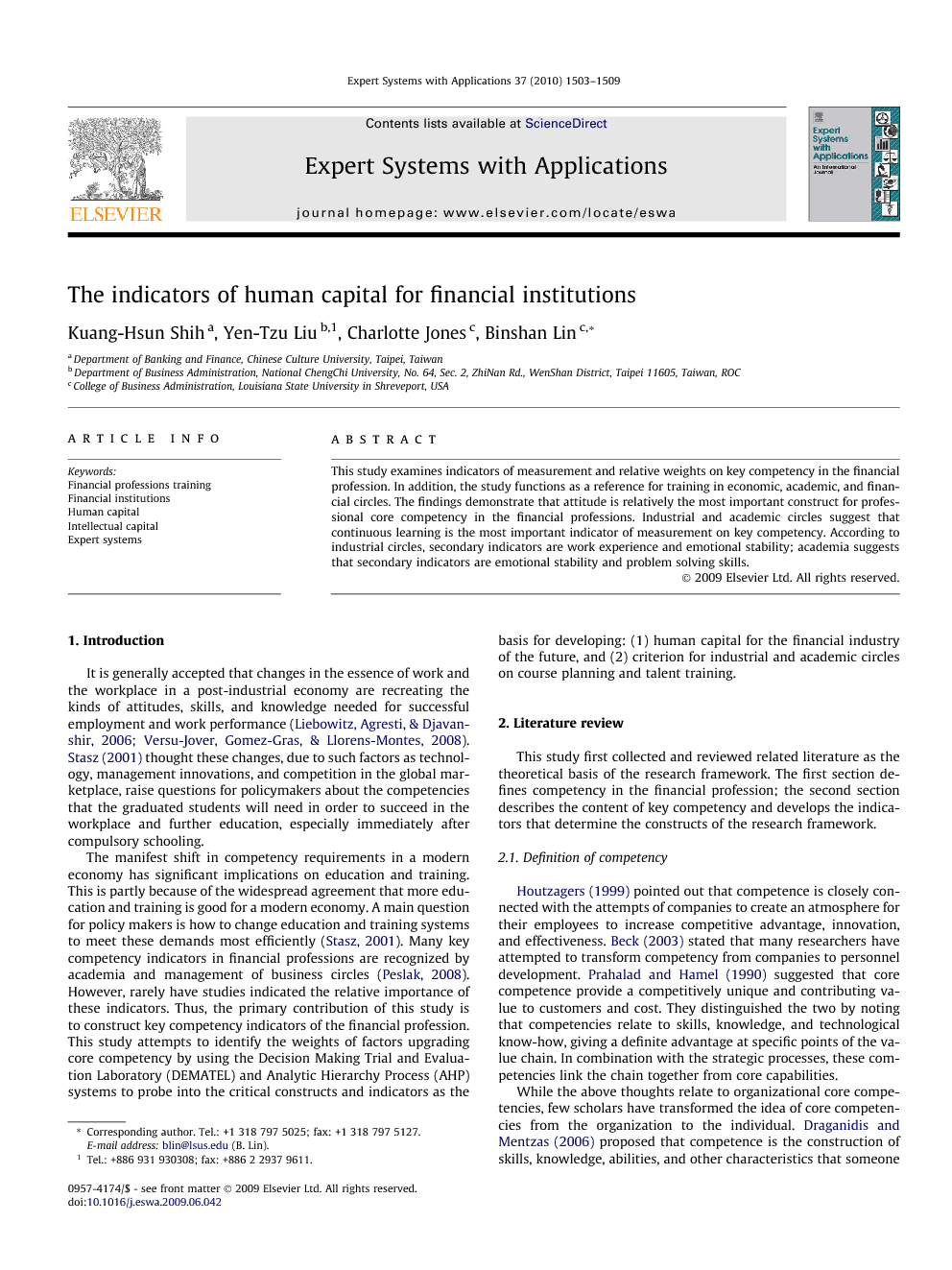 This study examines indicators of measurement and relative weights on key competency in the financial profession. In addition, the study functions as a reference for training in economic, academic, and financial circles. The findings demonstrate that attitude is relatively the most important construct for professional core competency in the financial professions. Industrial and academic circles suggest that continuous learning is the most important indicator of measurement on key competency. According to industrial circles, secondary indicators are work experience and emotional stability; academia suggests that secondary indicators are emotional stability and problem solving skills.

It is generally accepted that changes in the essence of work and the workplace in a post-industrial economy are recreating the kinds of attitudes, skills, and knowledge needed for successful employment and work performance (Liebowitz et al., 2006 and Versu-Jover et al., 2008). Stasz (2001) thought these changes, due to such factors as technology, management innovations, and competition in the global marketplace, raise questions for policymakers about the competencies that the graduated students will need in order to succeed in the workplace and further education, especially immediately after compulsory schooling. The manifest shift in competency requirements in a modern economy has significant implications on education and training. This is partly because of the widespread agreement that more education and training is good for a modern economy. A main question for policy makers is how to change education and training systems to meet these demands most efficiently (Stasz, 2001). Many key competency indicators in financial professions are recognized by academia and management of business circles (Peslak, 2008). However, rarely have studies indicated the relative importance of these indicators. Thus, the primary contribution of this study is to construct key competency indicators of the financial profession. This study attempts to identify the weights of factors upgrading core competency by using the Decision Making Trial and Evaluation Laboratory (DEMATEL) and Analytic Hierarchy Process (AHP) systems to probe into the critical constructs and indicators as the basis for developing: (1) human capital for the financial industry of the future, and (2) criterion for industrial and academic circles on course planning and talent training.

Traditionally speaking, researchers using AHP tend to find the items of the constructs by deduction or literature reviews. However, few of these researchers demonstrate the independence of the items. This study applied DEMATEL upon the experts’ opinions to validate the correlation among the items in the same constructs and then combined the factors with significant relations. Thus, the hypothesis of independence of AHP can be partially supported, as it solves the problems of excess CI or CR in the factors and increases the precision and feasibility of analysis. This study included three stages. In the first stage, the indicators were selected, according to experts’ opinions, in order to increase the expert and content validity of the questionnaire. In the second stage, the study constructed a correlation among the indicators using DEMATEL. Significant relations among the indicators in the same construct would violate the hypothesis of independence of AHP, so these factors needed to be combined. In the third stage, the study probed into the weights using AHP. The results demonstrated that, in the first hierarchy, the experts and scholars suggested that attitude is the most important construct in core competencies of the financial profession. Businesses indicated that continuous learning, working experience, and emotional stability were the three indicators having higher weights. Academia indicates that continuous learning, emotional stability, and problem solving skills were the top three indicators. According to analytical results, it was concluded that the business experts felt that working experience is relatively important. When businesses recruit employees, they expect them to have more work experience related to the specific industry (Earl and Bright, 2003 and Seyed-Hosseini et al., 2006). On the contrary, institutes value training in problem solving skills. Thus, when setting a training program or selecting employees, businesses target on the problem solving skills of candidates. Stasz (2001) suggested that positive problem solving skills assist firms in the application of limited resources. Taylor and McNemar (1955) indicated that problem solving skill can reinforce teamwork. When employees have problem solving skills, they tend to solve problems with positive thinking, based upon their confidence. This, in turn, upgrades the overall work efficiency of the organizations. In addition, according to the weighted analytical results of AHP, industrial and academic circles both value continuous learning. The international financial environment changes significantly, and Wilson and Madsen (2008) suggested that continuous learning of the talents in the organizations would be their most critical competency. In recent years, some scholars have tried to determine how firms or organizations reinforce the talents’ continuous learning that can be achieved by: (1) scheduling adequate time for learning; (2) providing just-in-time training; (3) involving employees in training design; (4) using active training formats; (5) establishing a safe environment for learning, encouraging positive measurements; (6) ensuring new skills are promptly applied on the job; and (7) recognizing performance improvements (Mallon and Walton, 2005 and Spitzer, 1995). Thus, in the future, when businesses and academic institutes train talents, they should focus on continuous learning. Academic institutes can strengthen continuous learning by (1) establishing a safe environment for learning; (2) involving employees in training designs; (3) ensuring new skills are promptly applied on the job; and (4) recognizing performance improvements as motivations. According to this analysis, businesses and academic institutes should recognize the factors of core competency in the financial profession and strengthen core competencies by designing related courses and systems. In the future, students who intend to pursue careers in financial fields or talents of cross-disciplinary fields can continuously learn the knowledge and skills related to financial fields and develop related working and internship experiences to reinforce their problem solving skills and potential.