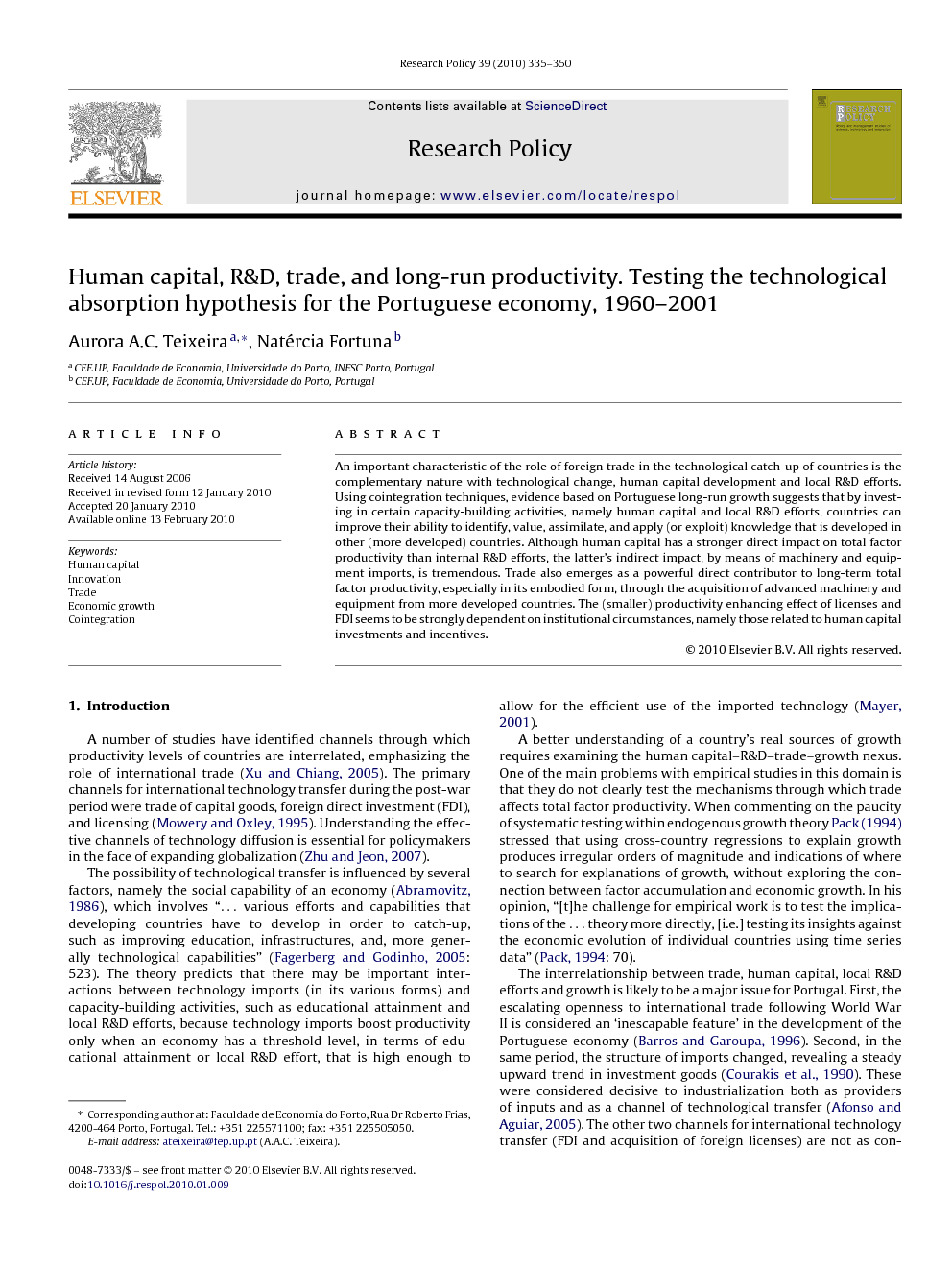 An important characteristic of the role of foreign trade in the technological catch-up of countries is the complementary nature with technological change, human capital development and local R&D efforts. Using cointegration techniques, evidence based on Portuguese long-run growth suggests that by investing in certain capacity-building activities, namely human capital and local R&D efforts, countries can improve their ability to identify, value, assimilate, and apply (or exploit) knowledge that is developed in other (more developed) countries. Although human capital has a stronger direct impact on total factor productivity than internal R&D efforts, the latter's indirect impact, by means of machinery and equipment imports, is tremendous. Trade also emerges as a powerful direct contributor to long-term total factor productivity, especially in its embodied form, through the acquisition of advanced machinery and equipment from more developed countries. The (smaller) productivity enhancing effect of licenses and FDI seems to be strongly dependent on institutional circumstances, namely those related to human capital investments and incentives.

A number of studies have identified channels through which productivity levels of countries are interrelated, emphasizing the role of international trade (Xu and Chiang, 2005). The primary channels for international technology transfer during the post-war period were trade of capital goods, foreign direct investment (FDI), and licensing (Mowery and Oxley, 1995). Understanding the effective channels of technology diffusion is essential for policymakers in the face of expanding globalization (Zhu and Jeon, 2007). The possibility of technological transfer is influenced by several factors, namely the social capability of an economy (Abramovitz, 1986), which involves “… various efforts and capabilities that developing countries have to develop in order to catch-up, such as improving education, infrastructures, and, more generally technological capabilities” (Fagerberg and Godinho, 2005: 523). The theory predicts that there may be important interactions between technology imports (in its various forms) and capacity-building activities, such as educational attainment and local R&D efforts, because technology imports boost productivity only when an economy has a threshold level, in terms of educational attainment or local R&D effort, that is high enough to allow for the efficient use of the imported technology (Mayer, 2001). A better understanding of a country's real sources of growth requires examining the human capital–R&D–trade–growth nexus. One of the main problems with empirical studies in this domain is that they do not clearly test the mechanisms through which trade affects total factor productivity. When commenting on the paucity of systematic testing within endogenous growth theory Pack (1994) stressed that using cross-country regressions to explain growth produces irregular orders of magnitude and indications of where to search for explanations of growth, without exploring the connection between factor accumulation and economic growth. In his opinion, “[t]he challenge for empirical work is to test the implications of the … theory more directly, [i.e.] testing its insights against the economic evolution of individual countries using time series data” (Pack, 1994: 70). The interrelationship between trade, human capital, local R&D efforts and growth is likely to be a major issue for Portugal. First, the escalating openness to international trade following World War II is considered an ‘inescapable feature’ in the development of the Portuguese economy (Barros and Garoupa, 1996). Second, in the same period, the structure of imports changed, revealing a steady upward trend in investment goods (Courakis et al., 1990). These were considered decisive to industrialization both as providers of inputs and as a channel of technological transfer (Afonso and Aguiar, 2005). The other two channels for international technology transfer (FDI and acquisition of foreign licenses) are not as consensual as to their impact (FDI) nor do they attract much attention (foreign licensing). Resorting to cointegration techniques, in the present paper, we estimate the relative importance of trade, human capital and R&D (as well as the interaction between the first and the two latter, i.e., the technological absorption hypothesis) on Portuguese long-run growth. The paper is organized as follows. The next section discusses the theory and empirical literature discussing the potential role of technology imports and the importance of human capital and local R&D efforts on the economic performance of countries. Section 3 provides some background on the dynamics of Portuguese technology imports and economic growth, and Section 4 discusses the data sources and proxies for the relevant variables. Section 5 highlights our econometric specification and the estimation results, and Section 6 discusses the main conclusions.