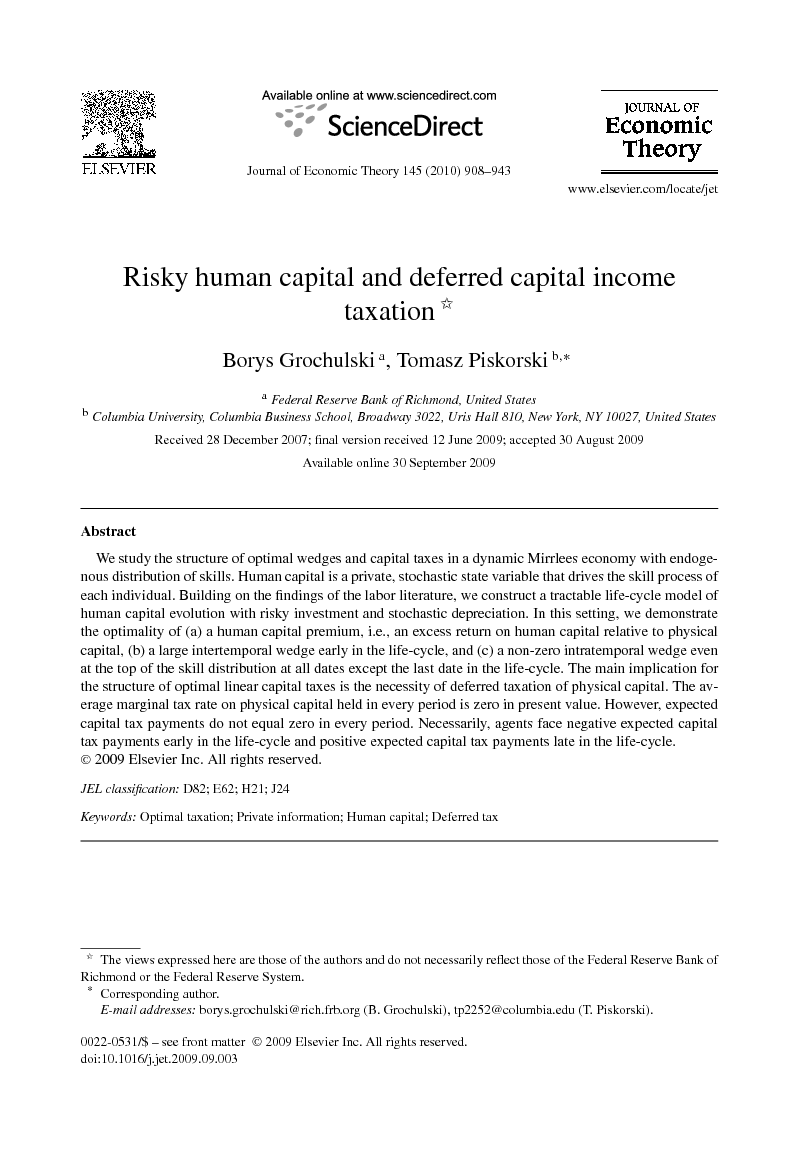 We study the structure of optimal wedges and capital taxes in a dynamic Mirrlees economy with endogenous distribution of skills. Human capital is a private, stochastic state variable that drives the skill process of each individual. Building on the findings of the labor literature, we construct a tractable life-cycle model of human capital evolution with risky investment and stochastic depreciation. In this setting, we demonstrate the optimality of (a) a human capital premium, i.e., an excess return on human capital relative to physical capital, (b) a large intertemporal wedge early in the life-cycle, and (c) a non-zero intratemporal wedge even at the top of the skill distribution at all dates except the last date in the life-cycle. The main implication for the structure of optimal linear capital taxes is the necessity of deferred taxation of physical capital. The average marginal tax rate on physical capital held in every period is zero in present value. However, expected capital tax payments do not equal zero in every period. Necessarily, agents face negative expected capital tax payments early in the life-cycle and positive expected capital tax payments late in the life-cycle.

Deferred taxes are a common feature of capital income tax systems currently used in many countries. Our paper provides a theoretical rationale for the use of such solutions. Our results show that it is necessary to use deferred taxes in a setting in which information relevant for the assessment of tax is revealed gradually over time. In a dynamic Mirrlees economy, we show that when human capital accumulation is taken into account in a way consistent with three important empirical facts about the life-cycle prop- erties of individual-specific human capital, deferred taxes are a necessary part of any optimal differentiable tax system. In our model, in which human capital investment is private, risky, and non-separable from consumption, there is a three-way complementarity between shirking, under- investing in human capital, and over-saving. This complementarity requires that a portion of tax on capital income obtained by agents early in the life-cycle be deferred until late in the life- cycle, when more information about agents’ private human capital decisions is available through the observation of longer labor income histories. Long histories of high labor income are con- sistent with high effort and high human capital investment. The deferred tax assessed on agents with such observed histories is low. Histories of low labor income, in contrast, are consistent with over-consumption and under-investment in human capital early in the life-cycle and shirking at later dates in the life cycle. Therefore, the deferred tax assessed on agents with such observed histories is high. Our results do not depend on several assumptions that we make for the ease of exposition. First, we assume that all agents are ex ante identical in our model. Our results go through with minor changes when ex ante agent heterogeneity is incorporated into the model, as long as these differences in individual characteristics are publicly observable. Second, the model can be eas- ily modified to replace the period-by-period resource constraint with the present value resource constraint. Third, in the market/tax implementation mechanism we consider, capital is the only asset that agents trade. If financial claims markets with observable trades are added to the model,our results go through without change, with all wealth (physical capital and financial claims) receiving the same tax treatment. In this paper, we focus on tax systems in which agents’ tax obligations depend linearly on their capital holdings. Linear capital taxes have been of central interest in the optimal capital taxation literature, and our focus on such taxes makes our results comparable with the results obtained in this literature (most readily with Kocherlakota [26]). Also, with linear capital taxes we can demonstrate the necessity of deferred capital taxes using a simple argument based on examining the Euler equations of the agents’ utility maximization problem. The same argument can be used to obtain this result under any tax system differentiable in capital (recall footnote 22). Under a tax system non-differentiable in capital, our argument based on the Euler equation cannot be used. It is clear, however, that deferred capital taxes are needed in some non-differentiable tax systems and not needed in other. On the one hand, consider a tax system constructed from the optimal linear system we characterize by introducing a small kink in the amount of the tax levied on capital held on the equilibrium path in our implementation at t = 1. With this kink sufficiently small, the values of the joint deviation strategies involving over-saving can be made arbitrarily close to the values of these strategies under linear taxes. Thus, under such a non- differentiable system, deferred capital taxes continue to be necessary. On the other hand, no capital taxes (including deferred) are necessary if the government controls capital accumulation directly, which it can in all dynamic Mirrlees economies in which capital is observable. Our results suggest that deferred taxation may have a role in other contexts in which informa- tion relevant for the provision of incentives becomes available gradually over time.