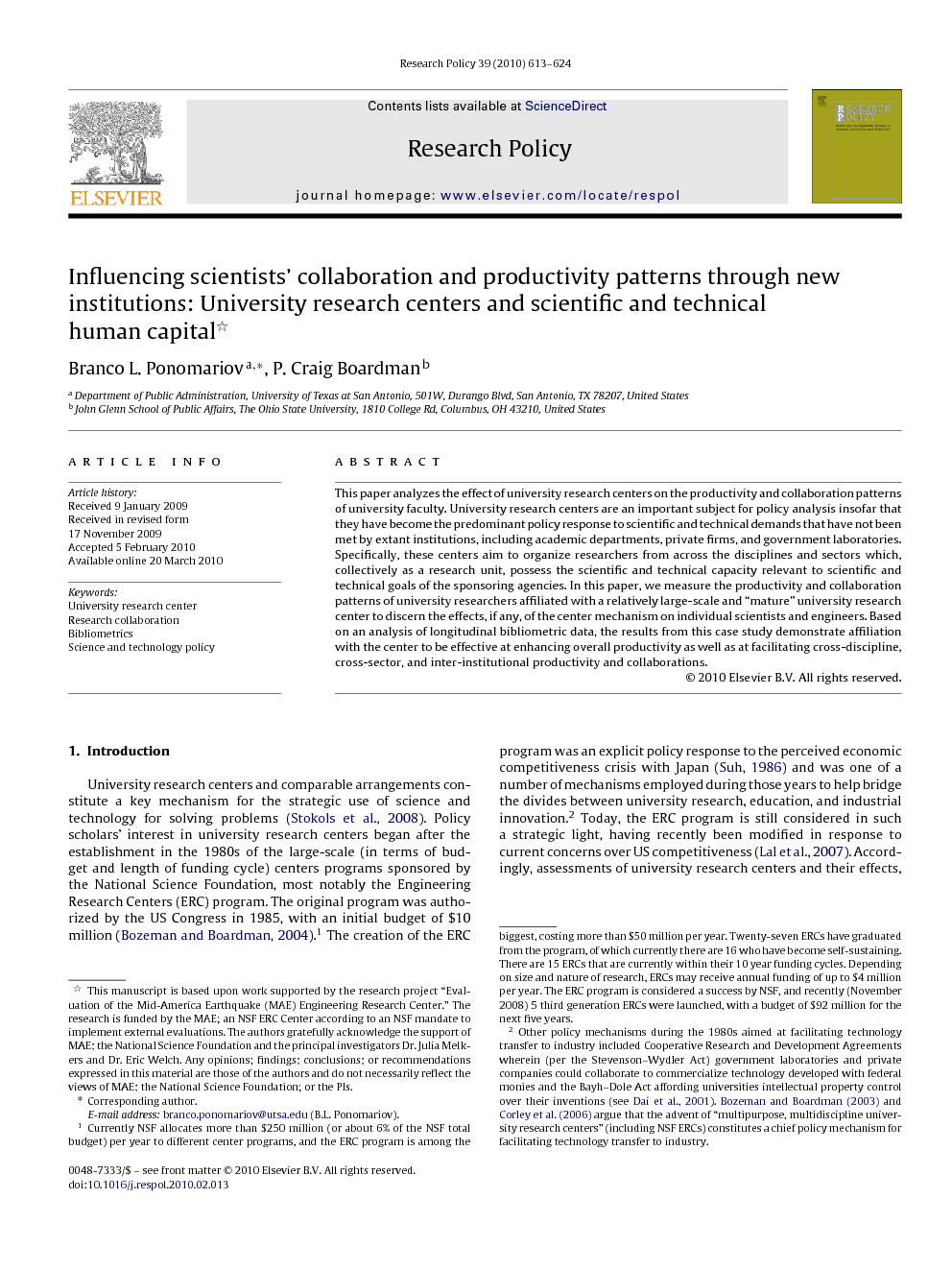 This paper analyzes the effect of university research centers on the productivity and collaboration patterns of university faculty. University research centers are an important subject for policy analysis insofar that they have become the predominant policy response to scientific and technical demands that have not been met by extant institutions, including academic departments, private firms, and government laboratories. Specifically, these centers aim to organize researchers from across the disciplines and sectors which, collectively as a research unit, possess the scientific and technical capacity relevant to scientific and technical goals of the sponsoring agencies. In this paper, we measure the productivity and collaboration patterns of university researchers affiliated with a relatively large-scale and “mature” university research center to discern the effects, if any, of the center mechanism on individual scientists and engineers. Based on an analysis of longitudinal bibliometric data, the results from this case study demonstrate affiliation with the center to be effective at enhancing overall productivity as well as at facilitating cross-discipline, cross-sector, and inter-institutional productivity and collaborations.

The results presented in this study suggest that affiliation with a university research center affects the behavior of affiliated faculty in ways consistent with the common emphases and goals in such center programs: increased productivity, collaboration (including with industry and with colleagues from other institutions), and interdisciplinarity. Though co-authorship and university-industry co-authorships are by now widespread and well-known phenomena (NSB 2008, Vol. 1, NSF-SRS 2004), the findings presented above are among the first to attribute these trends – albeit just for the specific case of the MAE Center – to institutional arrangements like university research centers. Though access to opportunities and resources provided by the center has positively affected publication productivity overall, the strongest impact seems to be in the collaborative behaviors underlying this publication activity. This set of effects is important to emphasize, as it is precisely the combination of these effects that enhances the claim that university research centers represent mechanisms to influence the behavior of scientists towards ends deemed desirable by the sponsoring mission agencies. While these results are “positive” in terms of the direction of effect of MAE Center affiliation on faculty collaboration and productivity, it is important to note that we report these results agnostically. Whether the outcomes we find here constitute benefits (e.g., increased co-authorship) or costs (e.g., decreased research autonomy, “free rider” co-authorship) remains an open debate, one we are unable to engage with the data and design used for this study. The mechanism for such effects was articulated through the lens of S&T human capital. Specifically, the overarching expectation of the study was that the effects of affiliation would be discernible in faculty affiliates’ respective scientific activities, with the particular configuration of S&T human capital provided by the center being reflected in these activities. The findings support such a mechanism and suggest that the S&T human capital concept is not merely descriptive, but additionally is relevant for designing and evaluating policy mechanisms aimed at influencing scientists’ behaviors and production. However, we acknowledge that the S&T human capital perspective draws heavily on alternate approaches to understanding research collaboration and scientific production (e.g., the resource-based view), and that multiple perspectives and levels of analysis must be considered when explaining the impacts of institutional arrangements like the MAE Center on university faculty behaviors and outputs. To the extent that implications for broader policy can be drawn from a single case study, we feel the demonstration that the behaviors and production of scientists can be changed within relatively short spans of time instructive. Such a finding is notable in the context of scientific community, notorious for its adherence to its strong traditional norms of self-regulation and unrestrained intellectual freedom. While such norms and traditions are indeed rigid and resistant to change, the scientific community seems to respond to appropriately designed sets of incentives and constraints. University research centers, at least those similar to the MAE Center, may be such a set. While providing discernible incentives to scientists in way of enhancing their S&T human capital – e.g., access to grant funding, equipment and instrumentation, collaborators, graduate students, partnership opportunities with other institutions and with industry, the ability to work on large and complex projects beyond the reach of individual investigators (Boardman and Bozeman, 2007 and Landry and Amara, 1998) – centers like the MAE Center seem to offer these incentives in a fashion commensurate with center and programmatic priorities to steer scientists towards utilizing center resources and opportunities in ways consistent with these priorities. Future research on the effects of the center mechanism on the conduct of scientists will benefit from better data, for sets of centers, either for the same centers program or across programs for the same agency. Such research would be greatly facilitated by uniform requirements from the sponsoring agencies for collecting appropriately structured bibliometric data. Moreover, while bibliometric data have numerous advantages (e.g., they are standardized and therefore reliable), future research could benefit by pairing bibliometric approaches with other methods and data, such as qualitative and survey-based research, to further elaborate the mechanism suggested by the MAE Center case here. While there has been extensive case study of singular centers, there has not been multi-case comparison using both bibliometric and qualitative approaches. Future research could also benefit by new research questions. An important issue that needs to be addressed relates to how durable or lasting are center effects. Though centers and centers programs attempt to facilitate lasting changes in how scientific and engineering education and research are conducted in the long term, the demonstration of relatively short term impacts (e.g., in this study, in external evaluations) tells very little about the sustainability of center impacts. Perhaps it is too early for this sort of assessment. But probably not. ERCs, like the MAE Center, date back to the mid-1980s, and there are other centers programs that date earlier than ERCs. The challenge of course is that for many of these historic centers that are no longer under the auspices of their founding centers programs, data are scarce, which reinforces our concern that centers programs begin to approach data collection and storage more systematically. While we do not advocate the use of standardized performance measures and metrics across all centers, even within the same centers program, currently there is a dearth of information for systematically assessing the sustained impact (or lack thereof) of the predominant science and technology policy mechanism in the US and many countries in Europe and Asia.