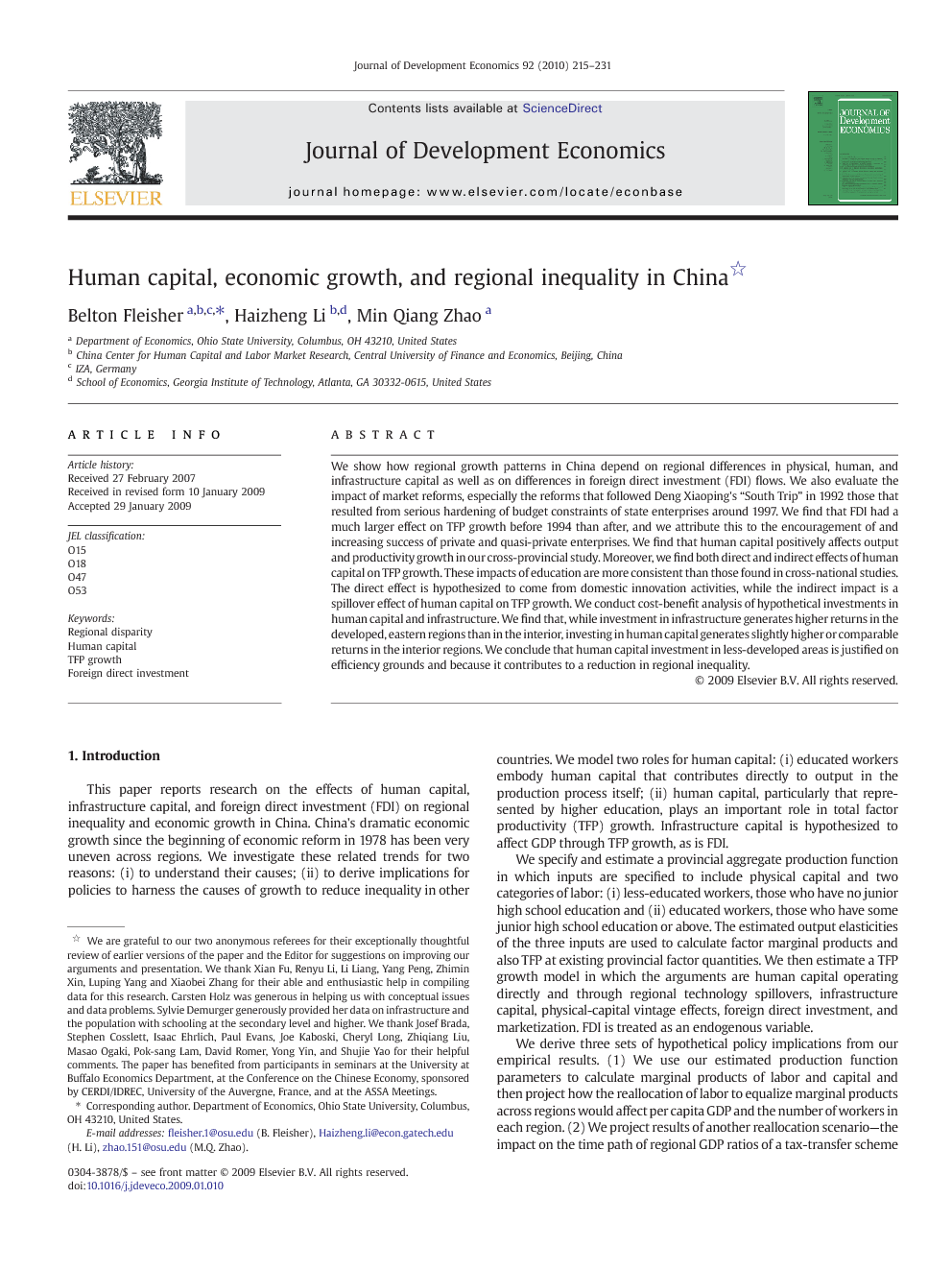 We show how regional growth patterns in China depend on regional differences in physical, human, and infrastructure capital as well as on differences in foreign direct investment (FDI) flows. We also evaluate the impact of market reforms, especially the reforms that followed Deng Xiaoping's “South Trip” in 1992 those that resulted from serious hardening of budget constraints of state enterprises around 1997. We find that FDI had a much larger effect on TFP growth before 1994 than after, and we attribute this to the encouragement of and increasing success of private and quasi-private enterprises. We find that human capital positively affects output and productivity growth in our cross-provincial study. Moreover, we find both direct and indirect effects of human capital on TFP growth. These impacts of education are more consistent than those found in cross-national studies. The direct effect is hypothesized to come from domestic innovation activities, while the indirect impact is a spillover effect of human capital on TFP growth. We conduct cost-benefit analysis of hypothetical investments in human capital and infrastructure. We find that, while investment in infrastructure generates higher returns in the developed, eastern regions than in the interior, investing in human capital generates slightly higher or comparable returns in the interior regions. We conclude that human capital investment in less-developed areas is justified on efficiency grounds and because it contributes to a reduction in regional inequality.

This paper reports research on the effects of human capital, infrastructure capital, and foreign direct investment (FDI) on regional inequality and economic growth in China. China's dramatic economic growth since the beginning of economic reform in 1978 has been very uneven across regions. We investigate these related trends for two reasons: (i) to understand their causes; (ii) to derive implications for policies to harness the causes of growth to reduce inequality in other countries. We model two roles for human capital: (i) educated workers embody human capital that contributes directly to output in the production process itself; (ii) human capital, particularly that represented by higher education, plays an important role in total factor productivity (TFP) growth. Infrastructure capital is hypothesized to affect GDP through TFP growth, as is FDI. We specify and estimate a provincial aggregate production function in which inputs are specified to include physical capital and two categories of labor: (i) less-educated workers, those who have no junior high school education and (ii) educated workers, those who have some junior high school education or above. The estimated output elasticities of the three inputs are used to calculate factor marginal products and also TFP at existing provincial factor quantities. We then estimate a TFP growth model in which the arguments are human capital operating directly and through regional technology spillovers, infrastructure capital, physical-capital vintage effects, foreign direct investment, and marketization. FDI is treated as an endogenous variable. We derive three sets of hypothetical policy implications from our empirical results. (1) We use our estimated production function parameters to calculate marginal products of labor and capital and then project how the reallocation of labor to equalize marginal products across regions would affect per capita GDP and the number of workers in each region. (2) We project results of another reallocation scenario—the impact on the time path of regional GDP ratios of a tax-transfer scheme that would increase investment in human capital and/or infrastructure capital. (3) We calculate internal rates of return to policies that would reallocate resources to investment in infrastructure and human capital. We believe the results have important implications for an understanding of economic growth in general, for factors contributing to China's rapidly rising regional inequality, and for the design of policies that would lead to a more equitable distribution of the benefits of growth within the world's most rapidly expanding economy. The remainder of this paper proceeds as follows. Section 2 provides some background information. In Section 3 we lay out our methodology. Section 4 describes our data. Section 5 reports our empirical results for aggregate production functions and TFP-growth models. In Section 6, we conduct cost–benefit analysis by computing the rates of return to investment in human capital and telephone infrastructure. In addition, we perform a hypothetical experiment by evaluating alternative investment strategies in reducing regional inequality. Section 7 concludes and provides policy recommendations.

China's spectacular economic growth has benefited its provinces and regions quite unequally. China has not only one of the highest rates of economic growth but also one of the highest degrees of regional income inequality in the world. We investigate the determinants of the regional dispersion in rates of economic growth and TFP growth. We hypothesize that they can be understood as a function of several interrelated factors, which include investment in physical capital, human capital, and infrastructure capital; the infusion of new technology and its regional spread; and market reforms, with a major step forward occurring following Deng Xiaoping's “South Trip” in 1992 and following the serious budget-constraint hardening that occurred in 1997 and subsequent years. Our empirical results are robust to alternative model specifications and estimation methods. First, FDI had much larger effect on TFP growth before 1994. After 1994, its effect becomes negligible. The diminished impact of FDI in the later stage of economic transition is consistent with the hypothesis that the acceleration of market reforms reduced the impact of FDI on technology transmission, not because technological advance became less important, but because the channels of its dissemination became more diffuse. We find that telecommunication infrastructure has a positive effect on TFP growth, but the impact of transportation infrastructure, which we measure by road intensity, is imprecisely estimated. We find that human capital positively affects output in three ways. First, educated labor makes a direct contribution to production. Workers with more than elementary school education have a much higher marginal product than labor with no higher than elementary schooling. Second, we estimate a positive, direct effect of human capital (measured by the proportion of workers with some senior high school education or above) on TFP growth. This direct effect is hypothesized to come from domestic innovation activities. Third, we present evidence of an indirect spillover effect of human capital on TFP growth. The positive impacts of education are more consistent than those found in cross-national studies. We derive cost-benefit analysis of possible policies to raise GDP using an internal rate of return metric and obtain results from a policy “experiment” in which we project the impact of increases in human capital and infrastructure capital on regional inequality. We find that, while investment in infrastructure generates higher returns in the developed regions, investing in human capital generates higher or comparable returns in less-developed regions. Therefore, we conclude that human capital investment in less-developed areas can achieve economic efficiency and reduce inequality. We present these estimates as our best effort to construct a framework for the formulation of beneficial policies. The robustness of our estimation results to alternative specifications makes us reasonably confident that our estimated returns to investment, particularly in human capital, would not seriously mislead policy makers. We find evidence that China's transition toward a market economy accelerated after 1994. But Chinese policy makers face a dilemma, because continued economic transformation has not been equally beneficial across China's major regions. The interior region (near west) and far western regions lag far behind the coastal and northeast regions in economic progress. There is an important implication of our research findings for China's on-going Go-West, formally known as the “Grand Western Development” Project, which was launched in 2000. It encompasses eleven provinces including the entire far west region as defined in this paper and five provinces in our interior region. The largest part of expenditure mandating from this project is focused on investment in infrastructure. Between 2000 and 2005, the cumulative investment in infrastructure was about 1 trillion yuan (about US$121 billion).43 The results of our research imply that it is important to put human capital investment on an equal footing in this project, both for reasons of economic efficiency and for reducing inequality.