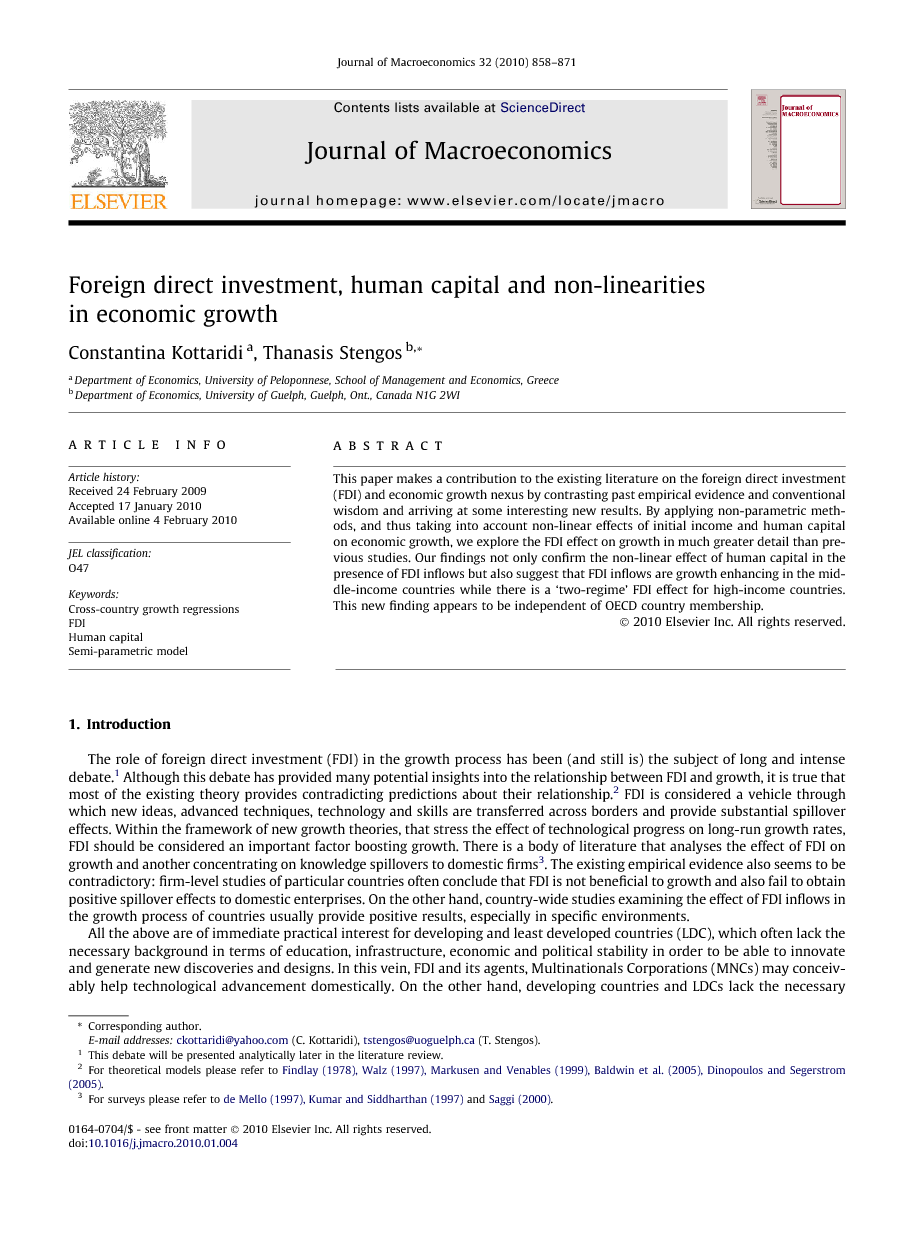 This paper makes a contribution to the existing literature on the foreign direct investment (FDI) and economic growth nexus by contrasting past empirical evidence and conventional wisdom and arriving at some interesting new results. By applying non-parametric methods, and thus taking into account non-linear effects of initial income and human capital on economic growth, we explore the FDI effect on growth in much greater detail than previous studies. Our findings not only confirm the non-linear effect of human capital in the presence of FDI inflows but also suggest that FDI inflows are growth enhancing in the middle-income countries while there is a ‘two-regime’ FDI effect for high-income countries. This new finding appears to be independent of OECD country membership.

The role of foreign direct investment (FDI) in the growth process has been (and still is) the subject of long and intense debate.1 Although this debate has provided many potential insights into the relationship between FDI and growth, it is true that most of the existing theory provides contradicting predictions about their relationship.2 FDI is considered a vehicle through which new ideas, advanced techniques, technology and skills are transferred across borders and provide substantial spillover effects. Within the framework of new growth theories, that stress the effect of technological progress on long-run growth rates, FDI should be considered an important factor boosting growth. There is a body of literature that analyses the effect of FDI on growth and another concentrating on knowledge spillovers to domestic firms3. The existing empirical evidence also seems to be contradictory: firm-level studies of particular countries often conclude that FDI is not beneficial to growth and also fail to obtain positive spillover effects to domestic enterprises. On the other hand, country-wide studies examining the effect of FDI inflows in the growth process of countries usually provide positive results, especially in specific environments. All the above are of immediate practical interest for developing and least developed countries (LDC), which often lack the necessary background in terms of education, infrastructure, economic and political stability in order to be able to innovate and generate new discoveries and designs. In this vein, FDI and its agents, Multinationals Corporations (MNCs) may conceivably help technological advancement domestically. On the other hand, developing countries and LDCs lack the necessary environment, hence they are not able to reap the benefits associated with FDI and as a consequence they are only used as platforms for MNCs to promote their own benefit by establishing rent-seeking activities. Moreover, the presence of MNCs may adversely affect domestic firms, given the market power of their proprietary assets such as technology, superior brand names and aggressive marketing techniques and as a result, FDI may crowd-out domestic investment. Our findings contradict the bulk of existing parametric evidence which suggests that a beneficial effect of FDI to economic growth exists only for countries with a minimum threshold of absorptive capacity, i.e. countries at higher levels of income. In contrast to this we find that FDI inflows have a non-linear effect on growth. These new findings appear to be independent of OECD country membership. Although there are a number of studies that bring up the issue of non-linear effects of FDI on growth, they are imposing specific restrictions as to the non-linearity on the grounds of human capital, level of development, financial development and degree of openness to trade, by simply incorporating interaction terms in a linear regression framework, or splitting the sample of countries into groups according to the above. Instead, in our study we impose no such prior restrictions on the potential non-linearity of FDI on economic growth and we resort to non-parametric techniques, thus surpassing the existing criticism on parametric econometric specifications. Apart from this methodological contribution, this paper makes another two contributions to the relevant literature; first, we confirm that the recently established non-linear effects of human capital on growth still hold in the presence of FDI inflows; second, we allow for possibly non-linear human capital effects along with non-linear FDI effects on growth. Hence, we “test” for the joint effect and interaction of FDI and human capital on economic growth. In our analysis we use a wide range of countries, both developed and developing in order to be able to distinguish potential differential effects between the two groups. Our results have potentially interesting policy implications. The non-linearity appearing in the relationship indicates a differential impact of FDI on growth which does not necessarily hold on the basis of the countries’ human capital absorptive capacity. Rather, this study suggests that the relationship is much more complex than that since the human capital itself exerts also a non-linear effect on economic growth. This may signal the need for a more specialized analysis and policy design within each country since (i) FDI may take place in very different sectors/industries among countries on the one hand and on the other hand even if it is in the same sectors/industries it might exhibit different productivities (ii) the evidence is also consistent with Durlauf and Johnson (1995) pointing to a model in which countries pass through distinct phases of development towards a unique steady state. That is, at a given time interval, countries display differences in their growth characteristics in their transition to a high growth position (Galor, 2005) and this is reflected in the observed non-linearities in the data. The rest of the paper is organized as follows: Section 2 discusses related literature; Section 3 presents the benchmark model and data, Section 4 analyses the non-linear models and estimation. Section 5 then presents empirical results and finally Section 6 concludes.

In this paper we study the influence of FDI on the process of economic growth among a wide set of OECD and non-OECD countries by allowing the impact to differ both across each country and also across each time period. We apply non-parametric techniques taking into account the previously documented non-linear effects of initial income and human capital on economic growth. To this end, we verify that initial income and human capital have a non-linear effect on economic growth as suggested earlier in the literature even in the presence of foreign investments. Our basic results are in contrast to the bulk of the existing parametric evidence which suggests that a beneficial effect of FDI to economic growth exists only for countries with a minimum threshold of absorptive capacity, i.e. countries at higher levels of income. Contrary to this, we find that FDI inflows have a non-linear effect on growth, they are growth enhancing in developing countries and there is a ‘two-regime’ FDI effect for high-income economies. Our paper parallels the widely discussed issue of non-linearities in convergence. For our purposes, we collected data from the WDI of the World Bank, UNCTAD (2005), Barro and Lee (2001) for 25 OECD and 20 non-OECD countries over the period 1970–2004. The countries were selected based on their availability of human capital data. The evidence may be of particular policy interest and it suggests that the FDI-growth nexus is a complex one. Whilst the previous section lays down some possible explanations for the differential FDI impact, our results certainly open up the floor for more thorough research, into the issue both in empirical and theoretical basis.