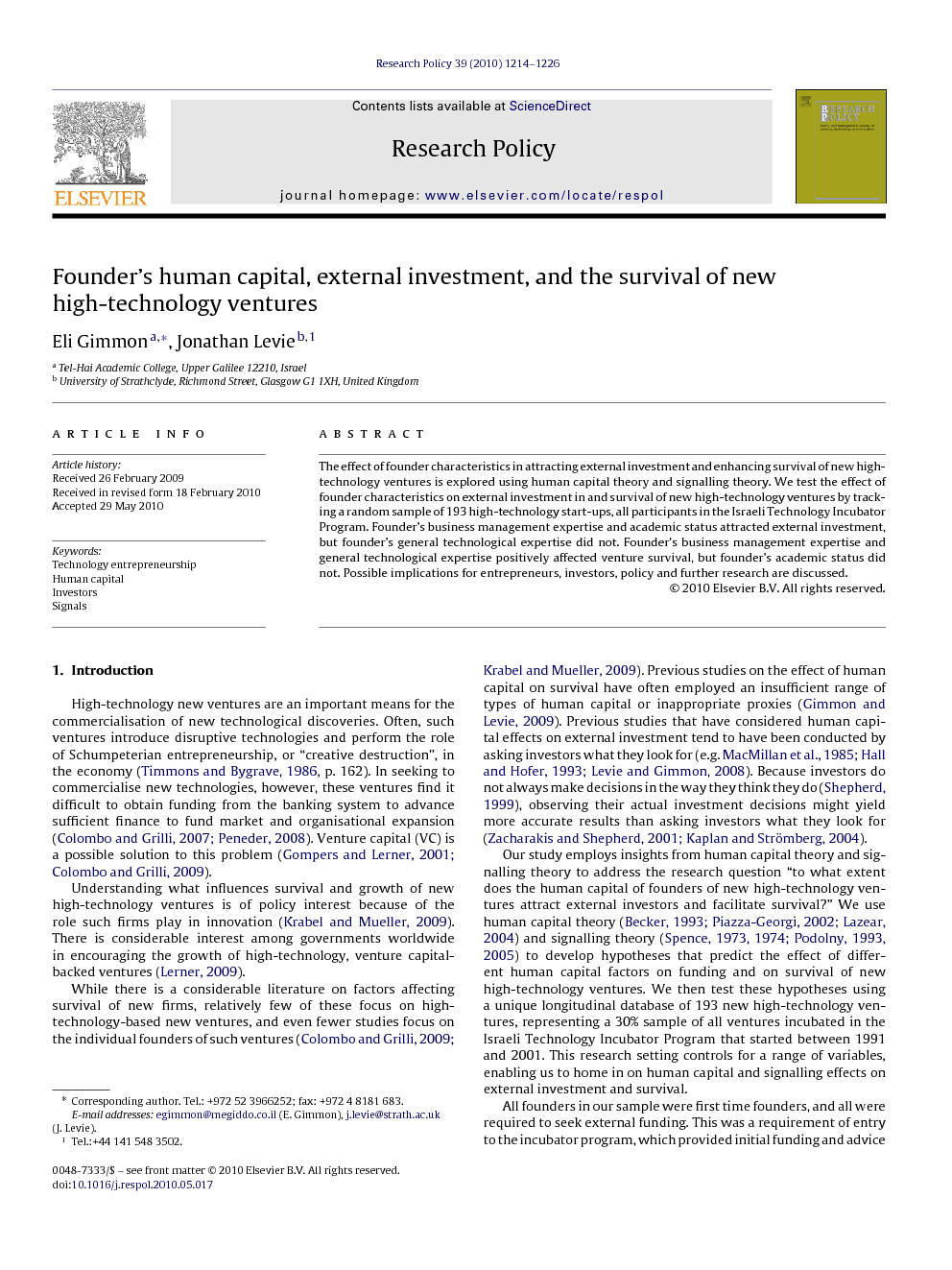 High-technology new ventures are an important means for the commercialisation of new technological discoveries. Often, such ventures introduce disruptive technologies and perform the role of Schumpeterian entrepreneurship, or “creative destruction”, in the economy (Timmons and Bygrave, 1986, p. 162). In seeking to commercialise new technologies, however, these ventures find it difficult to obtain funding from the banking system to advance sufficient finance to fund market and organisational expansion (Colombo and Grilli, 2007 and Peneder, 2008). Venture capital (VC) is a possible solution to this problem (Gompers and Lerner, 2001 and Colombo and Grilli, 2009). Understanding what influences survival and growth of new high-technology ventures is of policy interest because of the role such firms play in innovation (Krabel and Mueller, 2009). There is considerable interest among governments worldwide in encouraging the growth of high-technology, venture capital-backed ventures (Lerner, 2009). While there is a considerable literature on factors affecting survival of new firms, relatively few of these focus on high-technology-based new ventures, and even fewer studies focus on the individual founders of such ventures (Colombo and Grilli, 2009 and Krabel and Mueller, 2009). Previous studies on the effect of human capital on survival have often employed an insufficient range of types of human capital or inappropriate proxies (Gimmon and Levie, 2009). Previous studies that have considered human capital effects on external investment tend to have been conducted by asking investors what they look for (e.g. MacMillan et al., 1985, Hall and Hofer, 1993 and Levie and Gimmon, 2008). Because investors do not always make decisions in the way they think they do (Shepherd, 1999), observing their actual investment decisions might yield more accurate results than asking investors what they look for (Zacharakis and Shepherd, 2001 and Kaplan and Strömberg, 2004). Our study employs insights from human capital theory and signalling theory to address the research question “to what extent does the human capital of founders of new high-technology ventures attract external investors and facilitate survival?” We use human capital theory (Becker, 1993, Piazza-Georgi, 2002 and Lazear, 2004) and signalling theory (Spence, 1973, Spence, 1974, Podolny, 1993 and Podolny, 2005) to develop hypotheses that predict the effect of different human capital factors on funding and on survival of new high-technology ventures. We then test these hypotheses using a unique longitudinal database of 193 new high-technology ventures, representing a 30% sample of all ventures incubated in the Israeli Technology Incubator Program that started between 1991 and 2001. This research setting controls for a range of variables, enabling us to home in on human capital and signalling effects on external investment and survival. All founders in our sample were first time founders, and all were required to seek external funding. This was a requirement of entry to the incubator program, which provided initial funding and advice to all founders. This enables us to control for previous founding experience, which is a very strong signal for many funders (Hsu, 2007), and to select a sample of new high-technology ventures all of whom were in the same market for funding. In human capital terms, prospective investors were left with a choice of general human capital signals, such as level of education, or specific human capital signals, such as relevant business management expertise or technological expertise. Our research design enables us to uncover which of these forms of human capital were employed as attractive signals by investors and which affected survival. Forty-one percent of this sample obtained funding from external investors up to 2001. By late 2003, only 40% of the sample were still active, with an additional 26% in a state of suspended animation and the rest (34%) closed for good. Controlling for a range of other factors, including industry sector, incubator location, and technology commercialisation strategies, we find that investors selected on business management expertise and academic status but not on founder's technological expertise. Founder's technological expertise and business management expertise positively affected survival but founder's academic status did not. The effect of external investment on survival was marginally significant. In the following sections we review the literature on factors affecting new venture survival, attraction of external investment, and the effect of external investment on new venture survival. We describe a simple theoretical model of founder's human capital, investment and venture survival and deduce a core set of hypotheses. We describe the research method, sample, and variables used to test the hypotheses. Results of multivariate logistic regressions of external investment and venture survival as alternative dependent variables against an identical set of independent human capital and control variables are then reported. We also report the reflections of four different experienced investors on our results. We conclude by noting the implications for entrepreneurs, investors, researchers and policymakers and the limitations of our research.