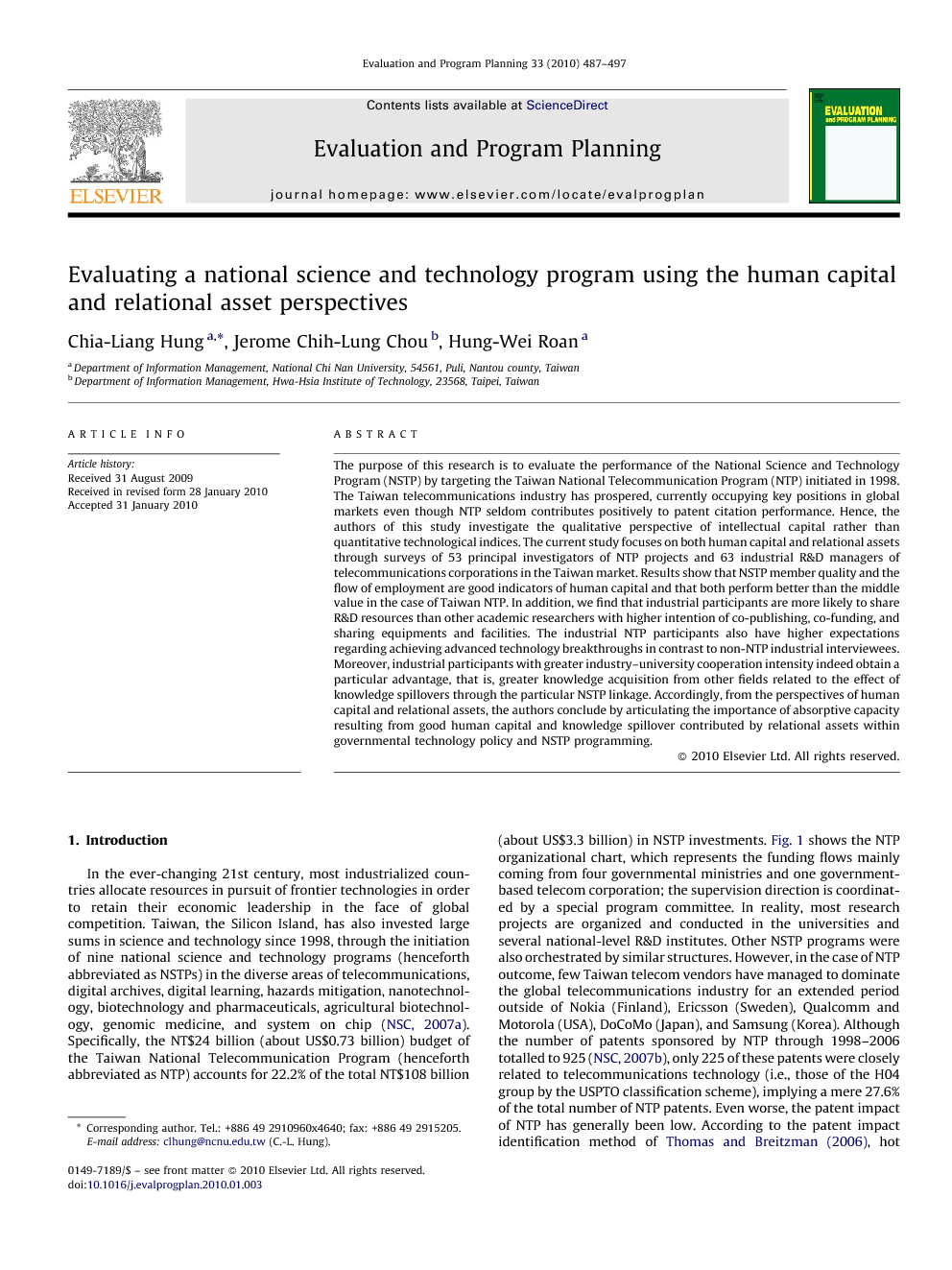 The purpose of this research is to evaluate the performance of the National Science and Technology Program (NSTP) by targeting the Taiwan National Telecommunication Program (NTP) initiated in 1998. The Taiwan telecommunications industry has prospered, currently occupying key positions in global markets even though NTP seldom contributes positively to patent citation performance. Hence, the authors of this study investigate the qualitative perspective of intellectual capital rather than quantitative technological indices. The current study focuses on both human capital and relational assets through surveys of 53 principal investigators of NTP projects and 63 industrial R&D managers of telecommunications corporations in the Taiwan market. Results show that NSTP member quality and the flow of employment are good indicators of human capital and that both perform better than the middle value in the case of Taiwan NTP. In addition, we find that industrial participants are more likely to share R&D resources than other academic researchers with higher intention of co-publishing, co-funding, and sharing equipments and facilities. The industrial NTP participants also have higher expectations regarding achieving advanced technology breakthroughs in contrast to non-NTP industrial interviewees. Moreover, industrial participants with greater industry–university cooperation intensity indeed obtain a particular advantage, that is, greater knowledge acquisition from other fields related to the effect of knowledge spillovers through the particular NSTP linkage. Accordingly, from the perspectives of human capital and relational assets, the authors conclude by articulating the importance of absorptive capacity resulting from good human capital and knowledge spillover contributed by relational assets within governmental technology policy and NSTP programming.

In the ever-changing 21st century, most industrialized countries allocate resources in pursuit of frontier technologies in order to retain their economic leadership in the face of global competition. Taiwan, the Silicon Island, has also invested large sums in science and technology since 1998, through the initiation of nine national science and technology programs (henceforth abbreviated as NSTPs) in the diverse areas of telecommunications, digital archives, digital learning, hazards mitigation, nanotechnology, biotechnology and pharmaceuticals, agricultural biotechnology, genomic medicine, and system on chip (NSC, 2007a). Specifically, the NT$24 billion (about US$0.73 billion) budget of the Taiwan National Telecommunication Program (henceforth abbreviated as NTP) accounts for 22.2% of the total NT$108 billion (about US$3.3 billion) in NSTP investments. Fig. 1 shows the NTP organizational chart, which represents the funding flows mainly coming from four governmental ministries and one government-based telecom corporation; the supervision direction is coordinated by a special program committee. In reality, most research projects are organized and conducted in the universities and several national-level R&D institutes. Other NSTP programs were also orchestrated by similar structures. However, in the case of NTP outcome, few Taiwan telecom vendors have managed to dominate the global telecommunications industry for an extended period outside of Nokia (Finland), Ericsson (Sweden), Qualcomm and Motorola (USA), DoCoMo (Japan), and Samsung (Korea). Although the number of patents sponsored by NTP through 1998–2006 totalled to 925 (NSC, 2007b), only 225 of these patents were closely related to telecommunications technology (i.e., those of the H04 group by the USPTO classification scheme), implying a mere 27.6% of the total number of NTP patents. Even worse, the patent impact of NTP has generally been low. According to the patent impact identification method of Thomas and Breitzman (2006), hot patents with high impacts usually have a minimum of 10 recent citations. There have only been 12 such “hot” NTP patents, mostly produced by the Industrial Technology Research Institute (ITRI) and the Institute for Information Industry (III) of Taiwan, both of which are Taiwan government-sponsored research organizations. In fact, over 73% of NTP participants had low-impact patents with zero citations. However, the real performance of NTP should not be solely evaluated based on the perspective of number of patents issued or hot patents, because Taiwan ICT manufacturers continue to occupy important positions in the global marketplace. For example, Taiwan is the largest wafer foundry, CD, DVD, and Mask ROM production center, and second largest in terms of IC design, WLAN, xDSL CPE, Cable CPE, and routers (NSC, 2007a). Therefore, a robust measurement of NTP performance should include other dimensions such as the quality of human resources trained at NTP and the innovation and entrepreneurship resulting from the relational assets within the industry-university cooperation network. The purpose of this paper is to discover the real value of the NSTPs by constructing a non-patent evaluation framework associated with the case of NTP.

The current study adopts a perspective different from the conventional quantitative approach of directly counting output in terms of patent applications and citations to evaluate a research and development program. Using the perspectives of human capital and relational assets, it explains how the Taiwan NTP is successful despite its lack of outstanding technological patents. In this study, the authors emphasize the intellectual capital “on” and “between” the trained talents themselves. The quality and employment flow of human capital trained by the NSTP is the first measurement of concern pertaining to the on-talent dimension; the other is the between-talent measurement dimension focusing on the relational assets that can be attributed to sharing R&D resources and the experience of participation benefits. The research in the NTP case generally supports the on-talent aspect; the quality of the NTP-trained human capital is perceived better than the middle value (the indifferent point), which results in the manufacturing industry offering higher salaries to NTP-trained individuals. NTP members also effectively flow into the Taiwan telecommunications industry, especially to the manufacturing sector. Yet, the authors show that the construct of ex ante perceived participation benefits is more effective than the behavior of sharing R&D resources for evaluation of relational assets. The measurement results of perceived participation benefits indicate that NTP industrial participants are more eager to achieve breakthroughs in critical technologies by cooperating with academic researchers than participants not involved in NTP. Even though most industrial NTP participants eventually become disappointed with the accelerating development of technology associated with commercial applications, they are generally satisfied with the collaboration experience because of the very small expectation gap pre- and post-participation. In addition, industrial participants with higher industry-university cooperation intensity gain a particular advantage, namely, greater knowledge acquisition from various other fields due to knowledge spillover. Taiwan telecommunications manufacturers stress the acquisition of knowledge from collaborative partners to improve and accelerate the integration of telecommunications system products (e.g., wireless and broadband devices), and capture global markets. It is thus reasonable that Taiwan telecommunications manufacturers have a greater willingness to offer higher salaries and more promotion opportunities to NTP-trained talents in contrast to telecom service providers. Accordingly, in terms of the national technology policy, measuring performance according to the perspectives of human capital and relational assets highlights the importance of the increase in absorptive capacity and knowledge spillover contributed by NSTP, as opposed to the conventional quantitative method that considers patent analysis and scientific impact. Thus, targeting the performance criteria associated with human capital and relational assets engendered by the government-sponsored NSTP is more appropriate than investigating the technological output, which only pertains to a few highly developed countries. Furthermore, based on the disappointment with accelerating application development of targeted technology among the industrial participants, which corresponds with the results of Sakakibara (1997) for the Japanese government-sponsored NSTP, Taiwan's NSTP program should not restrict itself to technological breakthroughs, but should also consider the fields of marketing research, regulation reform, infrastructure restructuring, and education as well as other fields that complement and nourish application innovation and knowledge diffusion associated with new technology. In fact, Georghiou (1998) suggests that the coordination function is the most important criterion when evaluating the performance of any scientific program. Hence, the NSTP technology policy design should emphasize liaison mechanisms to harmonize the objectives of the participants, thereby creating a space where heterogeneous relational alliances can be formed between public and industrial laboratories, between industrial competitors, or between firms with complementary resources. Further, while the academic sector usually pursues personal scientific achievements, the industrial sector focuses on the potential for commercialization according to a strict cost-benefit analysis. Hence, policies that can help to bridge this gap are imperative. For example, university researchers could receive career compensation pertaining to their role in carrying out applied research, or a tax reduction could be offered to industrial NSTP co-funders for their support in pioneering research. In addition, intermediary roles in marketing, public relations, and finance should also be initiated based on market demand or new ventures that attract the interests of industrial practitioners even when the dominant purpose of NSTP focuses mainly on the technology advancement. If carried out, NSTP participant satisfaction will improve as recruitment of NSTP-trained members increases due to their higher quality evaluations. Consequently, a coordination or liaison mechanism installed in the NSTP that supports program interaction will then support increasing returns in terms of absorptive capability and technology spillover, thus efficiently achieving the goal of a diffusion-oriented technology policy. The limits of the current study may be found in the problem of generalization. The targeting case, telecommunications, is an applied technology area that lacks a strong component of basic research, unlike nanotechnology or biotechnology. For future research, broadening the sample space encompassing different orientations of NSTP is necessary to justify and adjust the measurement constructs articulated in this study.