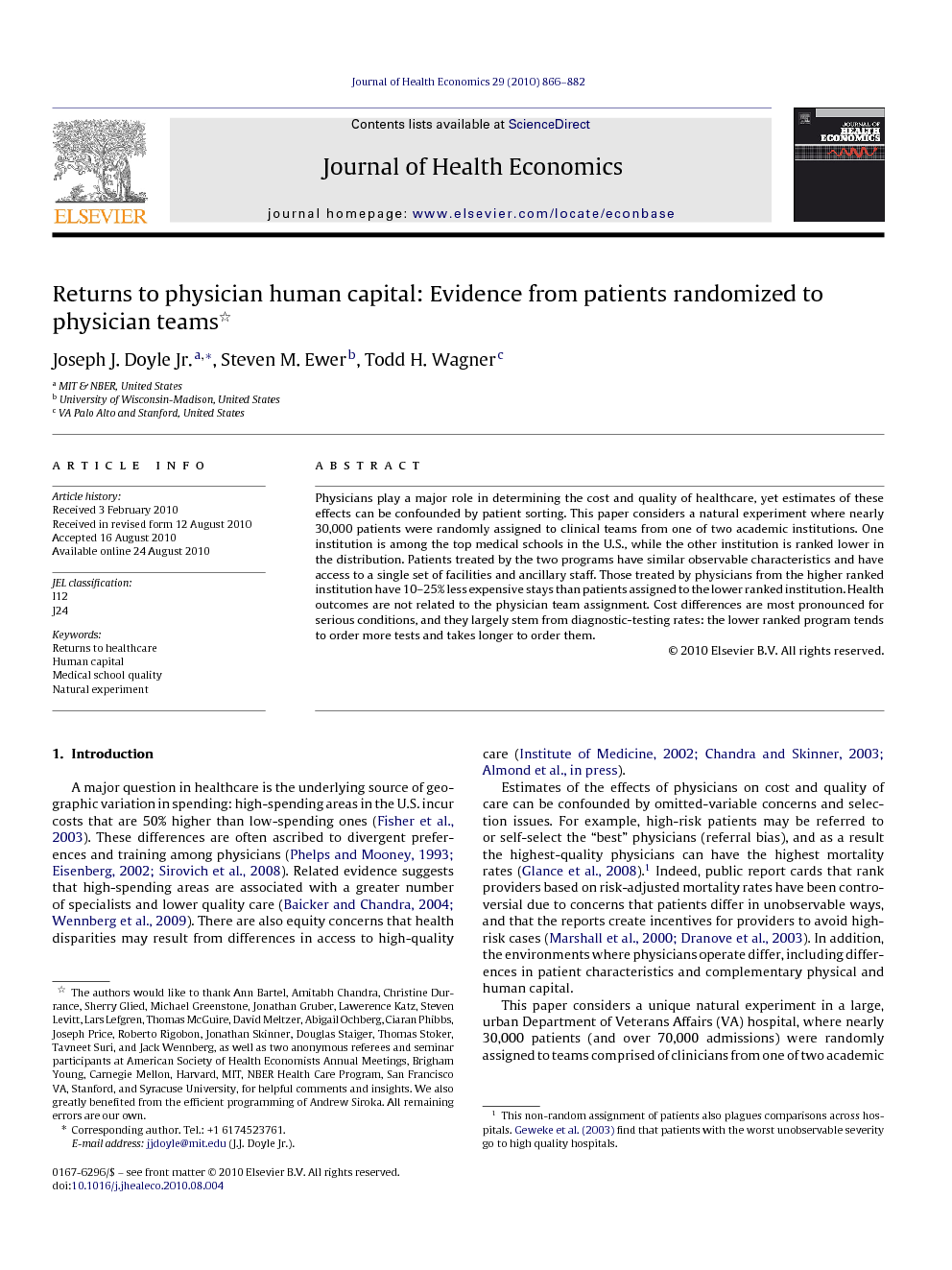 Physicians play a major role in determining the cost and quality of healthcare, yet estimates of these effects can be confounded by patient sorting. This paper considers a natural experiment where nearly 30,000 patients were randomly assigned to clinical teams from one of two academic institutions. One institution is among the top medical schools in the U.S., while the other institution is ranked lower in the distribution. Patients treated by the two programs have similar observable characteristics and have access to a single set of facilities and ancillary staff. Those treated by physicians from the higher ranked institution have 10–25% less expensive stays than patients assigned to the lower ranked institution. Health outcomes are not related to the physician team assignment. Cost differences are most pronounced for serious conditions, and they largely stem from diagnostic-testing rates: the lower ranked program tends to order more tests and takes longer to order them.

A major question in healthcare is the underlying source of geographic variation in spending: high-spending areas in the U.S. incur costs that are 50% higher than low-spending ones (Fisher et al., 2003). These differences are often ascribed to divergent preferences and training among physicians (Phelps and Mooney, 1993, Eisenberg, 2002 and Sirovich et al., 2008). Related evidence suggests that high-spending areas are associated with a greater number of specialists and lower quality care (Baicker and Chandra, 2004 and Wennberg et al., 2009). There are also equity concerns that health disparities may result from differences in access to high-quality care (Institute of Medicine, 2002, Chandra and Skinner, 2003 and Almond et al., in press). Estimates of the effects of physicians on cost and quality of care can be confounded by omitted-variable concerns and selection issues. For example, high-risk patients may be referred to or self-select the “best” physicians (referral bias), and as a result the highest-quality physicians can have the highest mortality rates (Glance et al., 2008).1 Indeed, public report cards that rank providers based on risk-adjusted mortality rates have been controversial due to concerns that patients differ in unobservable ways, and that the reports create incentives for providers to avoid high-risk cases (Marshall et al., 2000 and Dranove et al., 2003). In addition, the environments where physicians operate differ, including differences in patient characteristics and complementary physical and human capital. This paper considers a unique natural experiment in a large, urban Department of Veterans Affairs (VA) hospital, where nearly 30,000 patients (and over 70,000 admissions) were randomly assigned to teams comprised of clinicians from one of two academic institutions. As described in more detail later, most VA hospitals are affiliated with one or more academic medical school. In this paper, we analyze data from a VA that has two academic affiliates. One set of physicians is affiliated with an academic institution that is among the top medical schools in the U.S.; the other set is linked with an institution that is ranked lower in the quality distribution.2 Patient characteristics are similar across the two academic institutions due to the randomization. Meanwhile, the teams have access to the same facilities, the same nursing staff, and the same specialists for consultations. By comparing patient outcomes across these two groups, this paper aims to estimate effects of physicians on costs and health outcomes, i.e. returns to physician human capital.3 We find that patients assigned to physicians affiliated with the higher ranked program have 10% lower costs compared to the lower ranked program, and up to 25% lower costs for more complicated conditions. The differences largely stem from diagnostic-testing rates: the lower ranked program tends to order more tests and takes longer to order them. Meanwhile, hospital readmissions and mortality are unrelated to the physician-team assignment. A main caveat is that the results apply directly to one hospital and two residency training programs, albeit with thousands of physicians that comprise them. The “parent hospital” of the higher ranked institution is similar in treatment intensity to other top teaching hospitals, however. This suggests that practice patterns at the top-ranked institution are similar to other highly ranked institutions as well. The paper is organized as follows: Section 2 describes the empirical framework and defines the main parameters of interest; Section 3 provides background information on the physician teams and patient assignment, as well as a review of the previous literature; Section 4 describes the data; Section 5 reports the results; and Section 6 concludes.

Physicians play a major role in determining the cost of health care, and there are concerns that limitations on the supply of physicians and disparities in access to high-quality physicians and facilities can affect health outcomes. Comparisons of physicians are often confounded by differences in the patients they treat and the environments where they work. We study a unique natural experiment where nearly 30,000 patients were randomized to two sets of residency training programs in the same hospital. One is consistently ranked among the top programs in the country, whereas the other is ranked lower in the distribution according to measures such as the pass rate for Board exams. We find patients randomly assigned to the highly ranked program incur substantially lower costs: 10% overall and up to 25% depending on the condition. This difference is driven largely by variation in diagnostic testing, where Program B orders more tests and takes longer to order them. No difference is found for health outcomes, however. The results suggest a number of potential implications. First, physician effects on costs can be substantial, as expected but usually difficult to quantify. Second, if the results apply more broadly, inequality in access to top-ranked physicians may lead to differences in the use of specialists and testing but may not lead to health disparities. This suggests that a relaxation of accreditation standards for medical schools, for example, may not adversely affect quality of care, but may raise costs despite a greater supply of physicians.33 Third, the results are consistent with previous evidence that high-cost areas are associated with a greater use of diagnostic tests and reliance on specialists with little difference in health outcomes. This additional care may be unnecessary—providing a basis for innocuous cost containment. The results here suggest an alternative interpretation is possible as well: that higher cost areas may require greater treatment intensity to achieve similar outcomes. It remains to be tested whether high-cost areas are able to replicate the higher quality care associated with the low-cost areas.