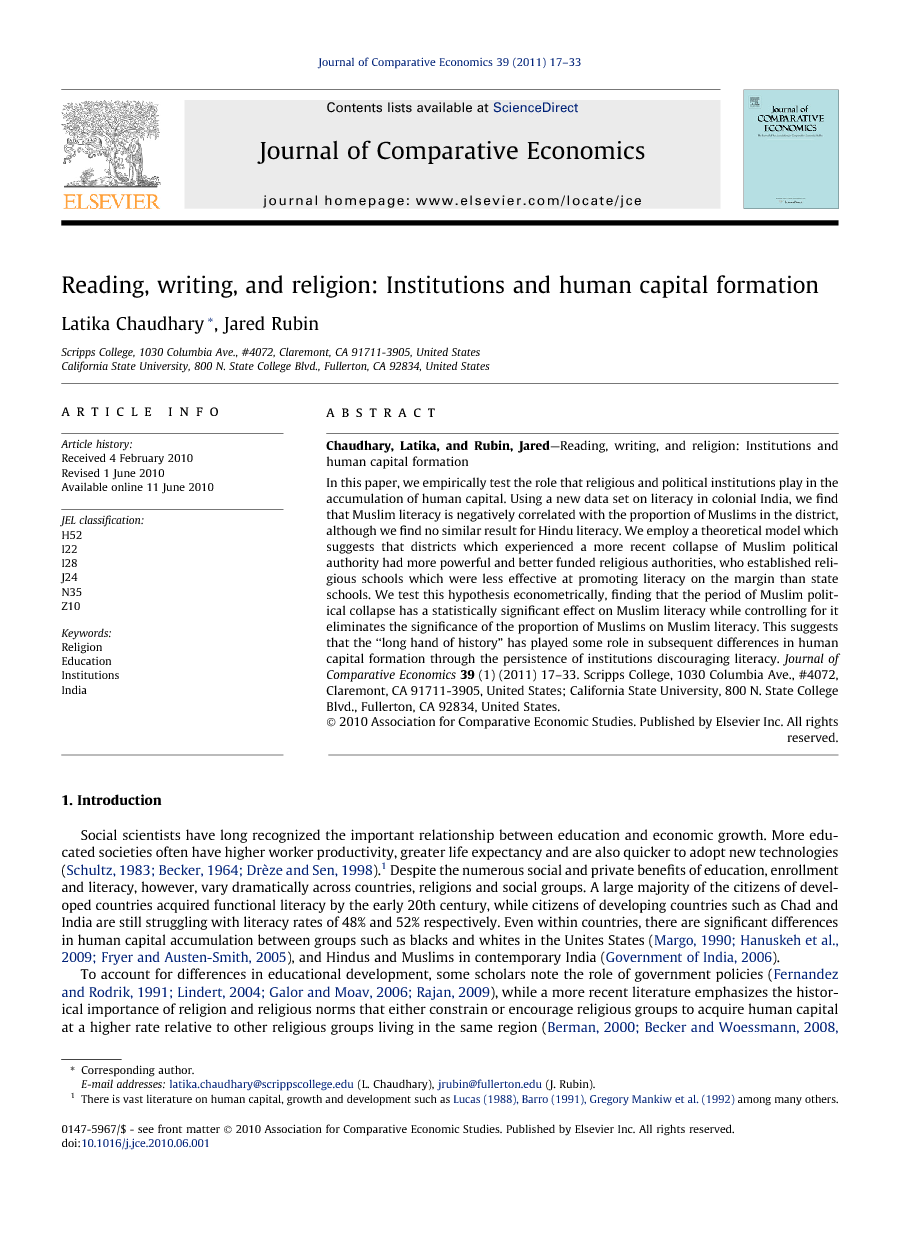 In this paper, we empirically test the role that religious and political institutions play in the accumulation of human capital. Using a new data set on literacy in colonial India, we find that Muslim literacy is negatively correlated with the proportion of Muslims in the district, although we find no similar result for Hindu literacy. We employ a theoretical model which suggests that districts which experienced a more recent collapse of Muslim political authority had more powerful and better funded religious authorities, who established religious schools which were less effective at promoting literacy on the margin than state schools. We test this hypothesis econometrically, finding that the period of Muslim political collapse has a statistically significant effect on Muslim literacy while controlling for it eliminates the significance of the proportion of Muslims on Muslim literacy. This suggests that the “long hand of history” has played some role in subsequent differences in human capital formation through the persistence of institutions discouraging literacy.

Social scientists have long recognized the important relationship between education and economic growth. More educated societies often have higher worker productivity, greater life expectancy and are also quicker to adopt new technologies (Schultz, 1983, Becker, 1964 and Drèze and Sen, 1998).1 Despite the numerous social and private benefits of education, enrollment and literacy, however, vary dramatically across countries, religions and social groups. A large majority of the citizens of developed countries acquired functional literacy by the early 20th century, while citizens of developing countries such as Chad and India are still struggling with literacy rates of 48% and 52% respectively. Even within countries, there are significant differences in human capital accumulation between groups such as blacks and whites in the Unites States (Margo, 1990, Hanuskeh et al., 2009 and Fryer and Austen-Smith, 2005), and Hindus and Muslims in contemporary India (Government of India, 2006). To account for differences in educational development, some scholars note the role of government policies (Fernandez and Rodrik, 1991, Lindert, 2004, Galor and Moav, 2006 and Rajan, 2009), while a more recent literature emphasizes the historical importance of religion and religious norms that either constrain or encourage religious groups to acquire human capital at a higher rate relative to other religious groups living in the same region (Berman, 2000, Becker and Woessmann, 2008, Becker and Woessmann, 2009, Botticini and Eckstein, 2005 and Botticini and Eckstein, 2007). Our paper relates to this broader literature by studying historical differences in educational attainment between the two main religious groups of India—Hindus and Muslims.2 Average Muslim literacy was slightly below average Hindu literacy in the colonial period and the variance in Muslim literacy was also lower than Hindu literacy (in 1911, Hindu literacy was 7.1% (variance 6.2%) and Muslim literacy was 6.2% (variance 4.8%); see Table 1 for details). However, there was tremendous heterogeneity between provinces. For example, in Bengal 21.1% of Hindu males were able to read and write in any language as compared to only 10.9% of Muslim males. But, in provinces such as Madras and the United Provinces, Muslims enjoyed comparable or even higher literacy than Hindus. Female literacy was very low for both religious groups, but the provincial patterns are similar to those for male literacy.This paper uses the earliest reliable data on literacy and a theoretical model to explore why Hindus and Muslims had different literacy rates under the British. The difference in literacy is a puzzle, because it appears to be a function not only of demographics and economic conditions, but also of the share of Muslims in a district.3 Using data from the 1911 and 1921 census, we find that Muslims who lived in districts with more Muslims had lower literacy rates. The British were keenly aware of the differences and actually devoted more resources to education in Muslim districts, yet seemingly to no avail. Our model explains this pattern by examining the incentives of Muslim religious authorities, political authorities and the citizens. Specifically, we argue that where Muslim rule in India collapsed more recently, Muslim religious authorities were stronger vis-à-vis the British. This is due to the legitimizing role that religious authorities have historically played for Muslim political authorities, a relationship that is an exogenous remnant of the birth of Islam and the type of institutions that it encouraged (for more, see Rubin (2009)). The model suggests that areas where Muslim political authorities collapsed more recently had stronger religious authorities that were better able to compete for Muslim students with the British. These authorities attracted more Muslims to schools with religious curricula that, on the margin, were less effective at promoting literacy. Our model thus implies that the share of Muslims in a district may merely proxy for the historical situation in which certain Muslim-dominant regions established institutions that discouraged literacy amongst Muslims. If this is true, then areas where Muslim rule collapsed a longer time ago should have more Muslim students attending secular (public) schools and thus the fraction of Muslims should contribute less (if at all) to lower literacy in these districts. We test this hypothesis by controlling for the period of Muslim collapse using three dummy variables: districts where Muslim rule collapsed prior to 1765, when Muslim rule fell in parts of the northern and eastern areas of India; 1765–1805, when Muslim rule collapsed in some of the southern and northern regions; and post-1805, when Muslim rule collapsed in the northern and western areas (Robinson, 1982). Though this is admittedly a noisy proxy, we find that a more recent collapse has a negative and statistically significant effect on Muslim literacy. Moreover, once we control for the period of Muslim collapse, the presence of other Muslims has no statistically significant effect on Muslim literacy. This more nuanced approach which incorporates the effects of institutions on actions and outcomes thus provides a more complete picture of both the relationship between Hindu and Muslim literacy in this period and, more generally, the relationship between institutions and differences in human capital formation between groups.

Differences in human capital accumulation are vital components of differences in broader economic outcomes both across countries and across different groups within the same country. In this paper, we attempt to shed light on the conditions under which Muslims (a minority group) attained less human capital than Hindus (the majority group) in early 20th century India. Are the factors leading to these differences cultural, institutional, demographic, or something else? Our baseline specifications suggest that Muslim literacy rates are negatively associated with the presence of other Muslims in the district. This result is robust to social, economic, and educational controls, although adding these controls slightly weakens the result. We argue that the institutional history of the region played a role in discouraging literacy amongst Muslims. Our analysis suggests that this history did indeed play a salient role in determining literacy rates, and that the difference between Hindu and Muslim literacy in the early 20th century may have been an unintended result of the differential timing of the collapse of Muslim political power. In sum, we view our paper as a first step in understanding the factors which affect human capital accumulation across different groups. We offer an alternative to cultural explanations that rely on the argument, “where there are more Muslims, there are worse economic outcomes.” We show that controlling for socio-economic variables and particularly institutional variables helps eliminate the effect of the presence of Muslims on Muslim literacy. More broadly, this analysis suggests that the “long hand of history” has played some role in subsequent differences in literacy rates through the persistence of institutions discouraging literacy.