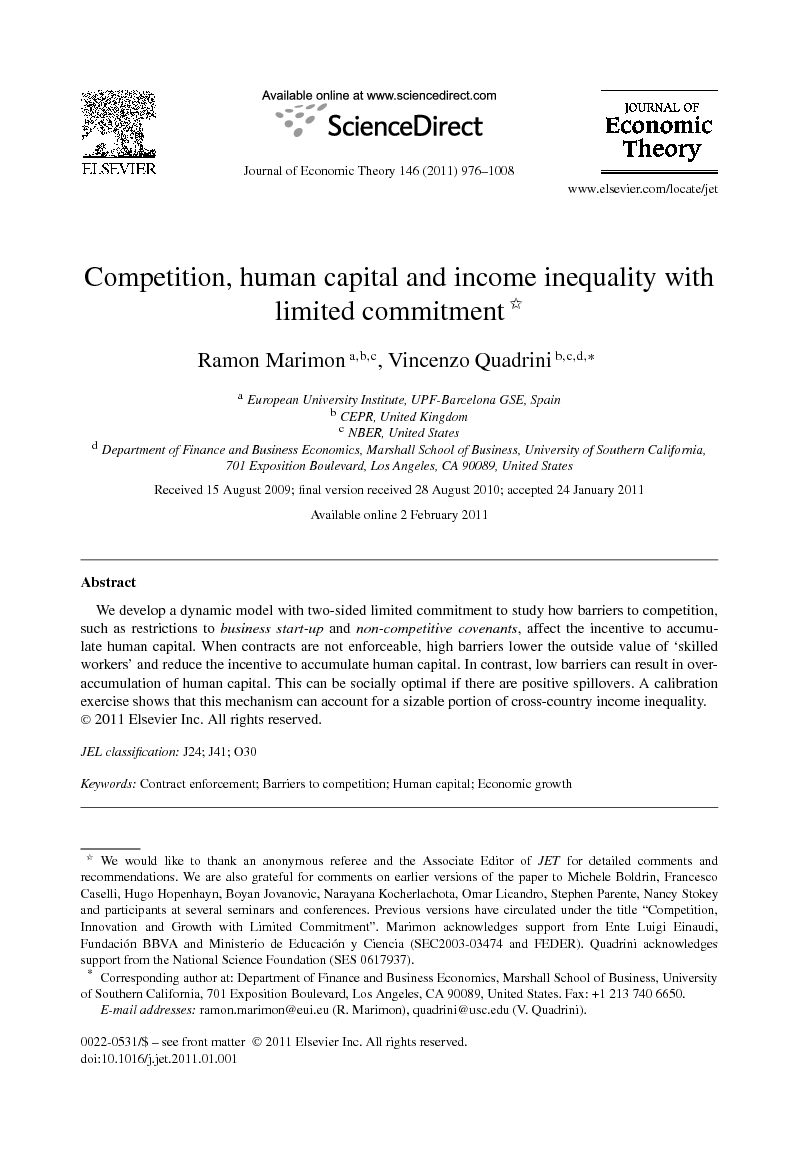 We develop a dynamic model with two-sided limited commitment to study how barriers to competition, such as restrictions to business start-up and non-competitive covenants, affect the incentive to accumulate human capital. When contracts are not enforceable, high barriers lower the outside value of ‘skilled workers’ and reduce the incentive to accumulate human capital. In contrast, low barriers can result in over-accumulation of human capital. This can be socially optimal if there are positive spillovers. A calibration exercise shows that this mechanism can account for a sizable portion of cross-country income inequality.

We have developed a theory in which barriers to the mobility of skilled workers affect the accumulation of human capital or knowledge, and therefore, the level of income. The theory does not simply say that competition enhances income. First, it emphasizes that some forms of limited enforcement are intrinsic to competitive labor markets, where wages are determined by supply and demand conditions. Second, it shows how different forms of contract enforcement affect the relation between competition, accumulation of human capital and economic develop- ment. In particular, when both investors and workers cannot commit to long-term contracts, the accumulation of human capital is determined by those firms that value human capital the most; in our benchmark model they are start-up firms. In this way our theory captures Bewley’s view that “ Wages rise quickly and sometimes dramat- ically in response to increases in the market demand for certain type of labor, but these increases are a reaction to competition from other firms, not to internal pressure from employees ”, Bewley [6, p. 407]. Our contribution is to show that ‘competition from other firms’ is also important for the accumulation of human capital. In particular, high levels of human capital are associated with low barriers to the mobility of knowledge because lower barriers increase ‘competition from other firms’. Using a semi-endogenous growth model, we have shown that barriers to business start-up have the potential to explain significant cross-country income differences. It may seem that accounting for 50% of the cross-country income gaps with the US overestimates the real contri- bution of our mechanism since the model is silent about many other features that are important for developing economies. Nevertheless, the fact that investment in human capital—even at the school level—is determined by expectations of future income returns, which in turn are affected by competitive and contractual conditions, seems a powerful mechanism.We have also shown that other barriers to knowledge mobility , such as strict enforcement of Covenants or Intellectual Property Rights, can have similar effects. Although we have modeled ‘on-the-job human capital accumulation’ and abstracted from skill-specific jobs, it should be clear that the mechanism described here is also relevant for ‘before-the-job human capital ac- cumulation’. In particular, the returns to education or to acquiring a specific mix of general and specific skills, depend on expected life-time returns. Our model shows that these returns depend crucially on the interplay between competition for skills in the labor market and the degree of commitment and enforcement.