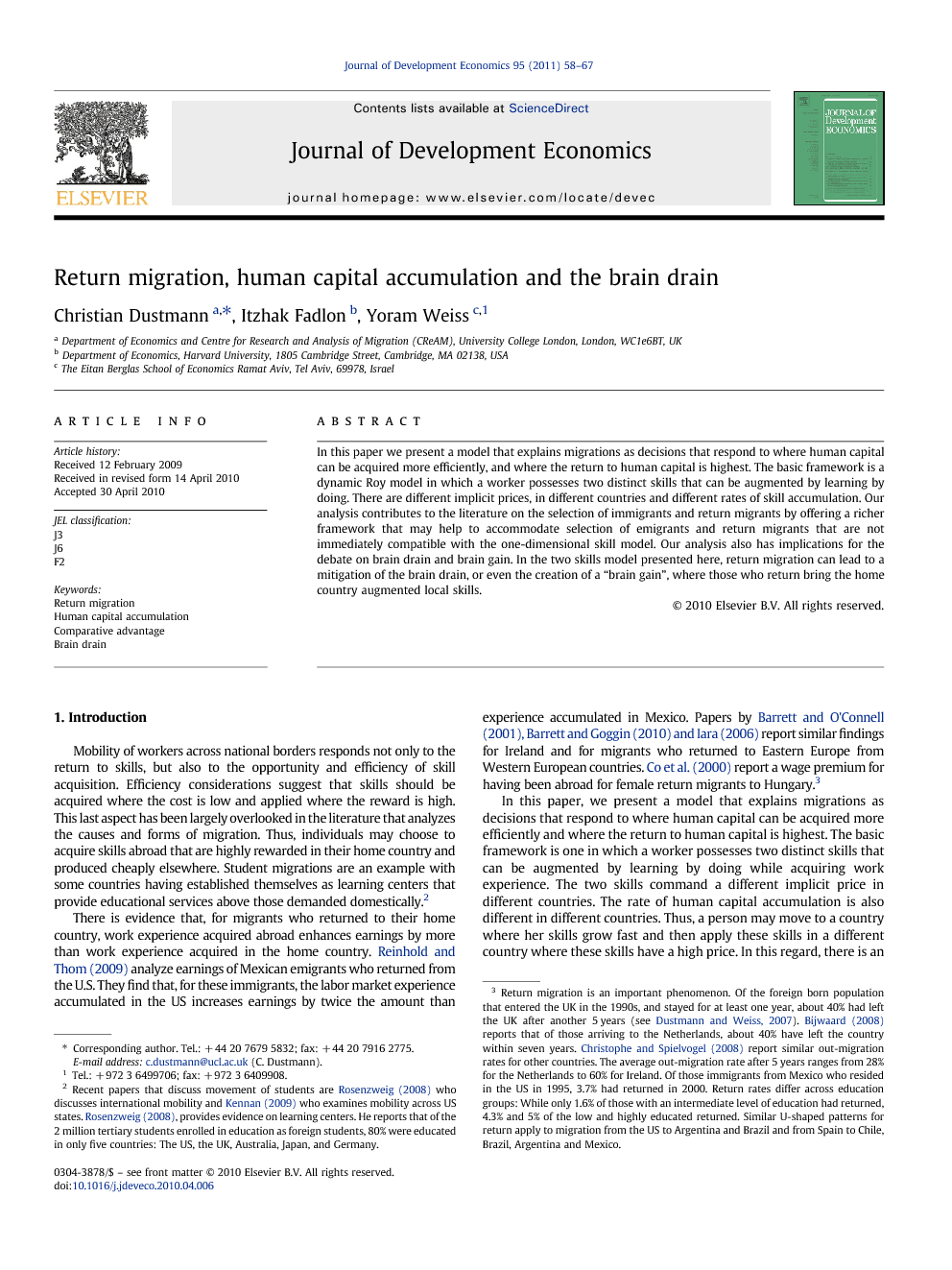 In this paper we present a model that explains migrations as decisions that respond to where human capital can be acquired more efficiently, and where the return to human capital is highest. The basic framework is a dynamic Roy model in which a worker possesses two distinct skills that can be augmented by learning by doing. There are different implicit prices, in different countries and different rates of skill accumulation. Our analysis contributes to the literature on the selection of immigrants and return migrants by offering a richer framework that may help to accommodate selection of emigrants and return migrants that are not immediately compatible with the one-dimensional skill model. Our analysis also has implications for the debate on brain drain and brain gain. In the two skills model presented here, return migration can lead to a mitigation of the brain drain, or even the creation of a “brain gain”, where those who return bring the home country augmented local skills.

We have presented a tractable model that focuses on the incentives to return immigration based on investment considerations.24 It was shown that, under some conditions, the model can generate a brain gain. The basic idea is that some countries are learning centers where one can learn skills more effectively, including skills that are applicable to the home country. Therefore, some individuals who emigrate will return to apply their acquired skills in the home country. Moreover, those who return have a relatively high endowment of the skill that is more valued in the home country. We have extended the work of Borjas (1987) by adding learning considerations to the Roy model. This richer framework has the potential to explain migration and remigration patterns between developed and less developed countries that differ in technology and industrial structure. An empirical application of such a model requires measures of the various dimensions of skills. Schooling alone is insufficient for this purpose but one can add the “task content” of occupations as in Autor and Handel (2009). We discussed here only learning by doing on the job. However, the basic ideas also apply to learning at school. A policy issue that applies to both cases is how to allocate the gains from immigration among individuals and in between countries. Tuition policies in the context of student migration are discussed in Rosenzweig, 2008 and Kennan, 2009. This problem is somewhat more complicated in the case of learning on the job, where the opportunity costs are not directly observable. Further issues arise if one can move to a learning center in order to acquire skills that are applicable in a third country rather than the home country, resulting in chain migration. In this case, the natural solution would be to require a payment from the immigrant for the “general” human capital that she acquired. Finally, an important issue that we did not discuss is the potential externalities if the skills of different workers in a given economy are complements. Hence, brain drain or gain can have magnified consequences through the impacts of emigration (immigration) on the workers who stay in the home country and also further consequences for the workers in the receiving country.