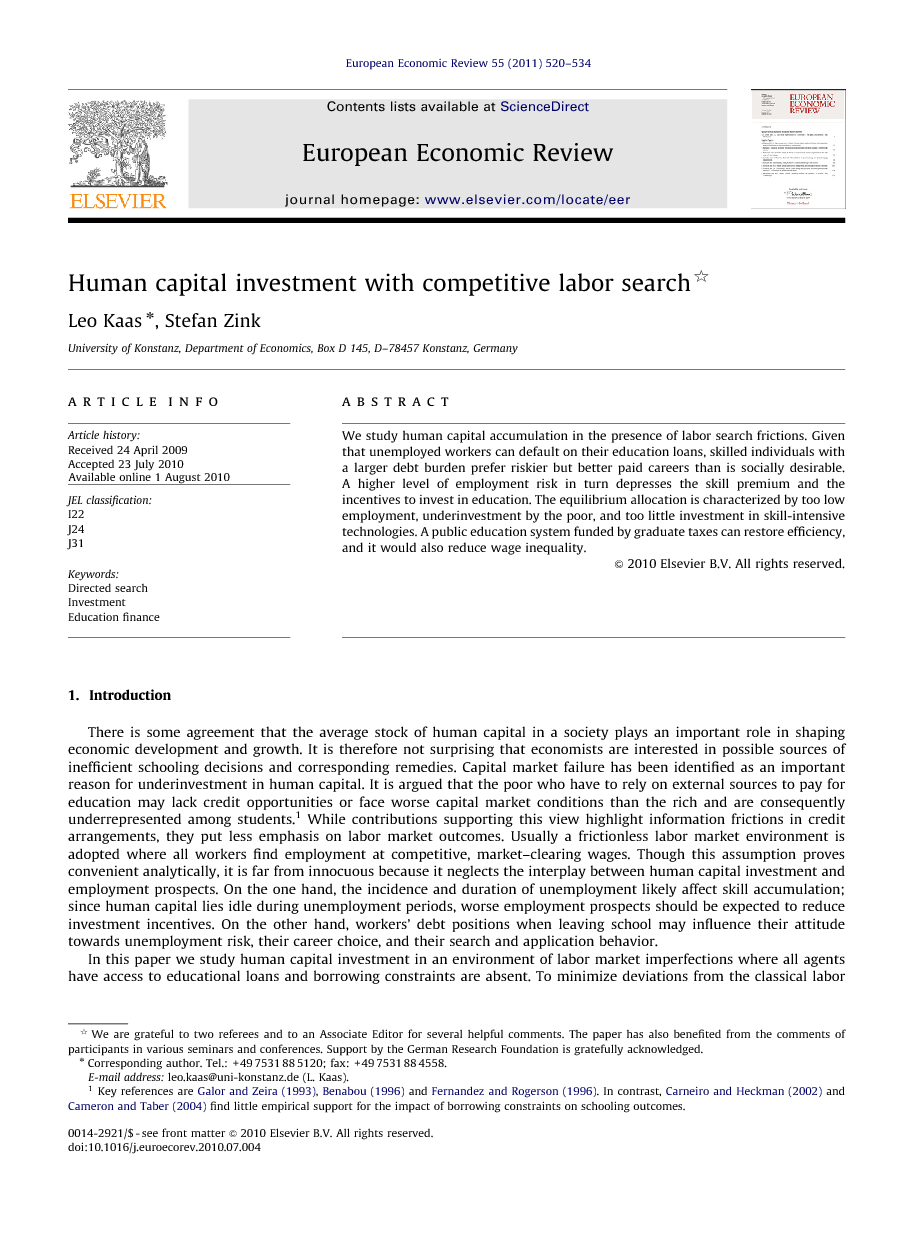 We study human capital accumulation in the presence of labor search frictions. Given that unemployed workers can default on their education loans, skilled individuals with a larger debt burden prefer riskier but better paid careers than is socially desirable. A higher level of employment risk in turn depresses the skill premium and the incentives to invest in education. The equilibrium allocation is characterized by too low employment, underinvestment by the poor, and too little investment in skill-intensive technologies. A public education system funded by graduate taxes can restore efficiency, and it would also reduce wage inequality.

There is some agreement that the average stock of human capital in a society plays an important role in shaping economic development and growth. It is therefore not surprising that economists are interested in possible sources of inefficient schooling decisions and corresponding remedies. Capital market failure has been identified as an important reason for underinvestment in human capital. It is argued that the poor who have to rely on external sources to pay for education may lack credit opportunities or face worse capital market conditions than the rich and are consequently underrepresented among students.1 While contributions supporting this view highlight information frictions in credit arrangements, they put less emphasis on labor market outcomes. Usually a frictionless labor market environment is adopted where all workers find employment at competitive, market–clearing wages. Though this assumption proves convenient analytically, it is far from innocuous because it neglects the interplay between human capital investment and employment prospects. On the one hand, the incidence and duration of unemployment likely affect skill accumulation; since human capital lies idle during unemployment periods, worse employment prospects should be expected to reduce investment incentives. On the other hand, workers’ debt positions when leaving school may influence their attitude towards unemployment risk, their career choice, and their search and application behavior. In this paper we study human capital investment in an environment of labor market imperfections where all agents have access to educational loans and borrowing constraints are absent. To minimize deviations from the classical labor market model and still allow for frictions, we develop a competitive search model in the tradition of Moen (1997) where firms post wages and workers direct their search. Unemployed workers face a trade-off between search for higher-paid jobs which are harder to find on the one hand, and faster entry into lower wage jobs on the other hand. The choice between these alternatives depends on the worker's attitude towards the risk of not finding employment in any period. In our model with an education choice, poorer workers intending to obtain education must raise an education loan which they cannot repay when unemployed. Although competitive loan premia fully reflect the default risk, the debt position takes an impact on workers’ preference for risk and thus on their job search behavior. Under limited liability, workers with a larger debt burden prefer jobs with higher wages and lower job-finding probabilities. The labor market in turn provides the risk sought by workers. The equilibrium allocation is characterized by too much unemployment risk among poorer workers which ultimately depresses their return to human capital. When considering their educational options, they anticipate these employment prospects and underinvest in education. As a result, both the educational attainment and the firms’ investment in skill-intensive technology are socially too low. There are no explicit frictions in the credit market in our model,2 so no worker is credit constrained. As a result, and in contrast to the literature on capital market failure, all workers face the same expected cost of education, regardless of their wealth endowment. On the other hand, the expected skill premium is lower for poorer individuals, so that they do not invest as much as their richer fellows. For richer individuals without an educational debt burden, schooling costs are sunk, so they have no impact on their search behavior. By contrast, students who have accumulated debts anticipate that the default option would reduce their effective debt burden. Being less reluctant to accept unemployment risk, they direct their search to riskier and better paid careers. Worse employment prospects, however, diminish their expected skill premium and depress their inclination to invest in human capital in the first place. Two recent papers support the view that educational debt induces graduates to search for higher-paid jobs. Rothstein and Rouse (2007) find that debt causes graduates to choose substantially higher-salary jobs and reduces the probability to choose a low-paid “public interest” job. Minicozzi (2005) shows that higher educational debt is associated with higher initial wages in the year after finishing school but with lower wage growth over the next years. The paper also cites several studies examining the effect of student debt on career choices of students of medicine and law. Moreover, default on student loans is a relevant issue, particularly in countries with high tuition fees. According to a study of the U.S. Department of Education (Choy and Li, 2006), ten percent of a 1992–1993 cohort of bachelor degree recipients who took out a federal loan had defaulted at least once in the ten years after graduation. Further, defaulted student loans cost the U.S. federal government more than two billion dollars per year during the 1990s (Flint, 1997). The extent to which people have to raise debts to pay for their education bears an effect on their labor market behavior and ultimately on their educational attainment. We show that a public education system where society covers individual schooling costs can avoid these distortions and restore efficiency, provided that subsidies are financed exclusively by a tax on skilled labor. If public education was financed differently, however, private education costs would become smaller than the social costs, so that too many workers would opt for education. Therefore, public education can only implement efficiency if it does not redistribute wealth. In this sense, we obtain a justification for public subsidization of higher education, even in the absence of capital market imperfections and human capital externalities. Another implication of our model is that wage inequality is, ceteris paribus, larger under private than under public funding. The remainder of the paper is organized as follows. After a brief review of related literature in the next section, the model is outlined in Section 3, equilibrium in the labor market is characterized in Section 4, and loan market equilibrium and schooling decisions are derived in Section 5. Section 6 analyzes efficiency, and Section 7 discusses public policy and wage inequality. Section 8 shows how our results extend to an infinite-horizon model, and Section 9 concludes.

Our analysis suggests that the amount of debt which an individual needs to finance his education, has an influence on his labor market prospects. When applying for jobs, skilled workers take into account that labor market failure may lead to delayed repayments or even default which both reduce the effective debt burden. A ceteris paribus increase in the amount of debt raised can therefore be expected to affect both risk-bearing and wages. Despite the absence of credit rationing or capital market imperfections, borrowing (poorer) individuals turn out to be worse off than non-borrowing (richer) ones. As a consequence, the expected skill premium is socially too low so that too few individuals invest in education. We also show that subsidizing education can remove the inefficiency, but only when the policy is financed by the workers who benefit from education and hence does not redistribute between different wealth classes. A policy that finances public education from general tax revenues would lead to overeducation in our framework. This finding highlights the difference between our inefficiency and possible underinvestment outcomes obtained under capital market failure where redistributive policies can be welfare improving. Apart from subsidizing education expenditures directly, some countries provide students with subsidized loans which enable the debtor to defer payments during unemployment spells without accumulating interest. Our model shows that this kind of “contingent debt contract” which allows to reduce the effective debt burden during unemployment periods likely provokes more risk-taking and less employment which in turn has a negative effect on the utilization of human capital and investment incentives.