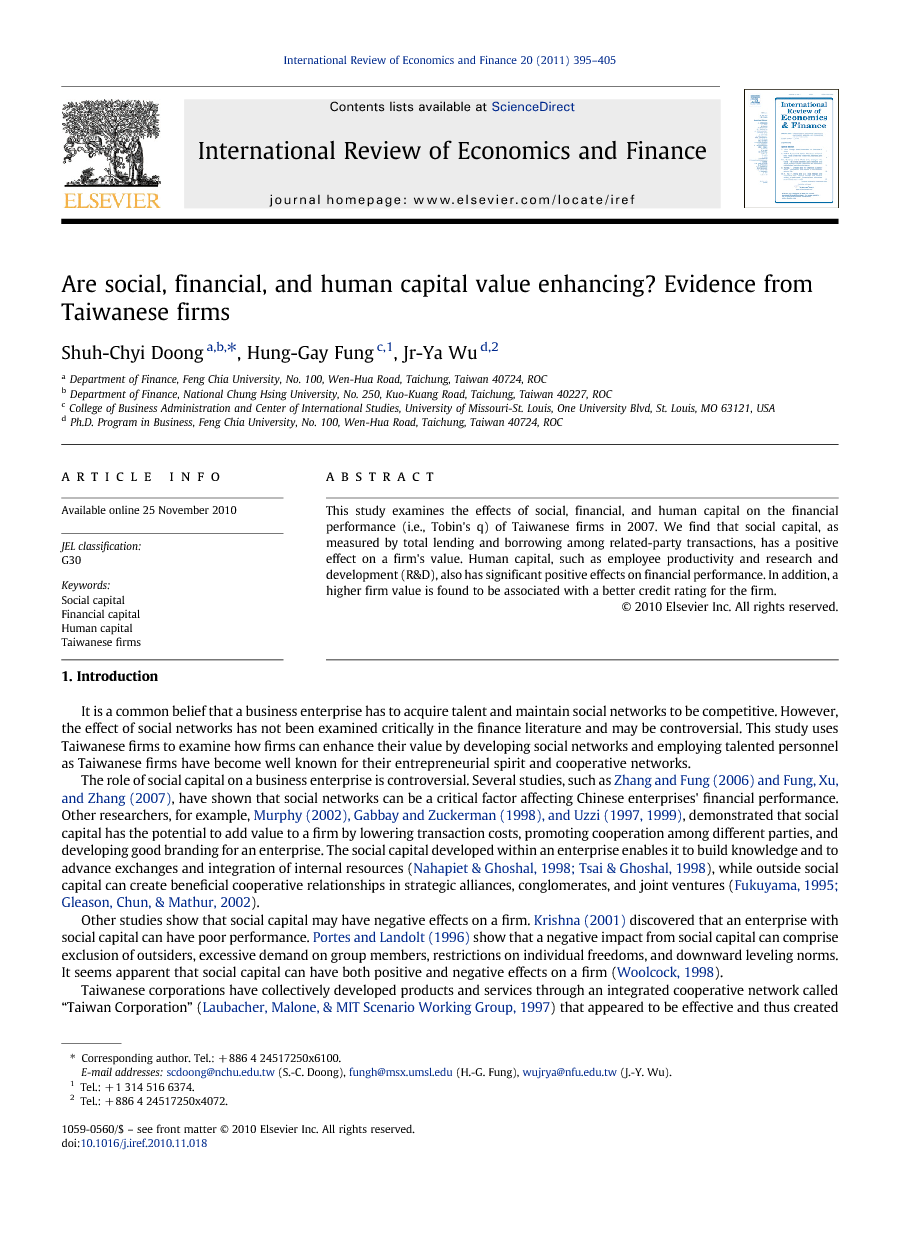 This study examines the effects of social, financial, and human capital on the financial performance (i.e., Tobin's q) of Taiwanese firms in 2007. We find that social capital, as measured by total lending and borrowing among related-party transactions, has a positive effect on a firm's value. Human capital, such as employee productivity and research and development (R&D), also has significant positive effects on financial performance. In addition, a higher firm value is found to be associated with a better credit rating for the firm.

It is a common belief that a business enterprise has to acquire talent and maintain social networks to be competitive. However, the effect of social networks has not been examined critically in the finance literature and may be controversial. This study uses Taiwanese firms to examine how firms can enhance their value by developing social networks and employing talented personnel as Taiwanese firms have become well known for their entrepreneurial spirit and cooperative networks. The role of social capital on a business enterprise is controversial. Several studies, such as Zhang and Fung, 2006 and Fung et al., 2007, have shown that social networks can be a critical factor affecting Chinese enterprises' financial performance. Other researchers, for example, Murphy, 2002, Gabbay and Zuckerman, 1998, Uzzi, 1997 and Uzzi, 1999, demonstrated that social capital has the potential to add value to a firm by lowering transaction costs, promoting cooperation among different parties, and developing good branding for an enterprise. The social capital developed within an enterprise enables it to build knowledge and to advance exchanges and integration of internal resources (Nahapiet and Ghoshal, 1998 and Tsai and Ghoshal, 1998), while outside social capital can create beneficial cooperative relationships in strategic alliances, conglomerates, and joint ventures (Fukuyama, 1995 and Gleason et al., 2002). Other studies show that social capital may have negative effects on a firm. Krishna (2001) discovered that an enterprise with social capital can have poor performance. Portes and Landolt (1996) show that a negative impact from social capital can comprise exclusion of outsiders, excessive demand on group members, restrictions on individual freedoms, and downward leveling norms. It seems apparent that social capital can have both positive and negative effects on a firm (Woolcock, 1998). Taiwanese corporations have collectively developed products and services through an integrated cooperative network called “Taiwan Corporation” (Laubacher, Malone, & MIT Scenario Working Group, 1997) that appeared to be effective and thus created economies of scale. Thanks to this network of enterprises, Taiwan has become the world's second leading IT hardware producer. Three important underlying forces behind the success of Taiwanese enterprises are examined in this study: enterprises' social capital of related parties, financial capital, and human capital. First, we examine the effects of social capital through related-party transactions on firm value. The phenomenon of related-party transactions is common all over the world. What is distinctive about the Taiwanese enterprises is that the production structure of their mutually connected networks is loosely structured, yet highly flexible and effective. With respect to internal transactions within an integrated market, the transaction costs between related parties inside a firm are likely to be reduced. The integrated organization can also reduce asymmetric information, resulting in more synergy among production, marketing, and finance, which should translate into higher market value for a firm. Second, we examine the effects of financial capital on Taiwanese firms. Taiwanese enterprises typically raise funds through two main channels: debt financing and equity. Their credit rating is thus a critical index of the firm's ability to raise capital for expansion and growth. Capital market financing and credit ratings play an important role in the success of the business and as such are a critical factor determining an emerging market's performance (Chan, Fung, & Thapa, 2007). Third, human capital seems to be valuable for firms. Fung et al. (2007) argued that the traditional economic production function with labor and capital omitted the skilled human capital factor, while Snell and Dean (1992) show that employees with economically valuable skills, experience, and knowledge are important to firms. An enterprise with rich human capital is able to innovate more and to resolve customers' problems more promptly, leading to better performance (Guthrie, 2001). An enterprise with more high-quality human resources that are not easily reproduced by competitors can amass more profit, competitive advantages, and core capabilities (Stewart, 1997). In fact, Huselid, 1995, Sherer, 1995, Hansson, 1997 and Pennings et al., 1998 found a significantly positive correlation between the quality of a firm's human capital and operational performance or market value. The “2005 Annual Operation and Performance Report” issued by the United States Patent and Trademark Office showed that Taiwanese enterprises in the United States applied for 16,865 patents, an increase of 28.46% over the previous year, at 13,129, while the number of patents approved for Taiwanese firms was 6311, which ranked fourth, after the United States, Japan, and Germany.3 Our study offers several interesting results. First, the social capital variable, which is measured by the ratio of total lending or borrowing among its related parties or related persons to a reputation proxy, are found to have a positive and significant effect on the financial performance of firms, i.e., Tobin's q. Our results indicate the social capital may be costly initially; however, after a certain point, it begins to enhance firm value significantly. This result confirms the dual role (positive and negative) of social capital in a corporation. Second, we find that financial capital affects firm value. That is, a large corporate total liability will decrease firm value while an improved credit rating is positively related to firm's performance. Finally, human capital, as measured by the ratio of gross profit to total employees, and research and development expenses (R&D) are positively related to Tobin's q. Interestingly, the value of firms tends to be positively related to (1) a higher proportion of employees with a university degree or higher and (2) a greater number of technologies or products successfully developed by the firm. The rest of the paper is organized as follows. First, we describe the methodology, data, and, in the following section, various measures of social capital, financial capital, and human capital. Section 3 discusses the empirical results and conducts robustness checks of our results. The last section is the conclusion.