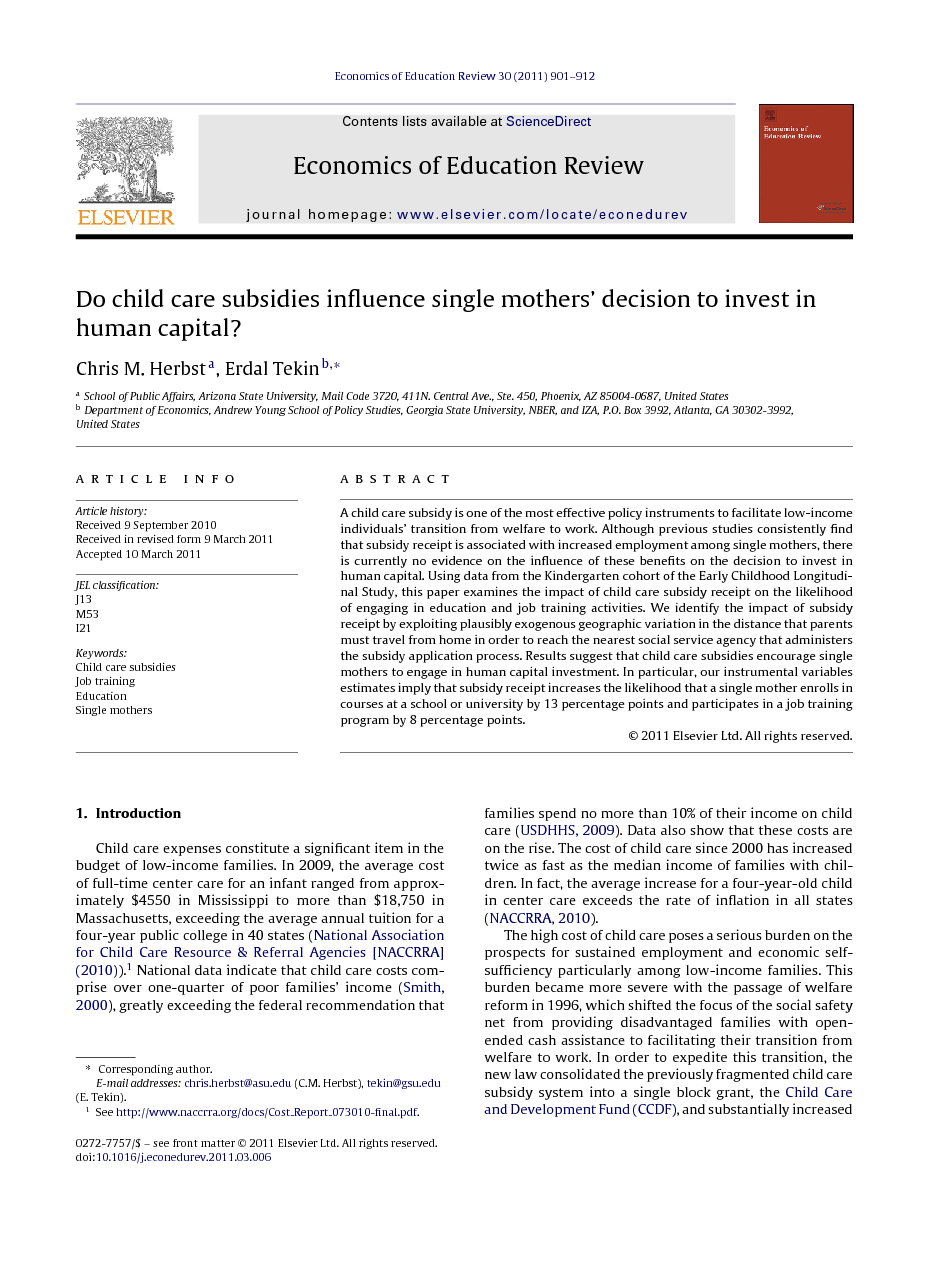 A child care subsidy is one of the most effective policy instruments to facilitate low-income individuals’ transition from welfare to work. Although previous studies consistently find that subsidy receipt is associated with increased employment among single mothers, there is currently no evidence on the influence of these benefits on the decision to invest in human capital. Using data from the Kindergarten cohort of the Early Childhood Longitudinal Study, this paper examines the impact of child care subsidy receipt on the likelihood of engaging in education and job training activities. We identify the impact of subsidy receipt by exploiting plausibly exogenous geographic variation in the distance that parents must travel from home in order to reach the nearest social service agency that administers the subsidy application process. Results suggest that child care subsidies encourage single mothers to engage in human capital investment. In particular, our instrumental variables estimates imply that subsidy receipt increases the likelihood that a single mother enrolls in courses at a school or university by 13 percentage points and participates in a job training program by 8 percentage points.

Child care expenses constitute a significant item in the budget of low-income families. In 2009, the average cost of full-time center care for an infant ranged from approximately $4550 in Mississippi to more than $18,750 in Massachusetts, exceeding the average annual tuition for a four-year public college in 40 states (National Association for Child Care Resource & Referral Agencies [NACCRRA] (2010)).1 National data indicate that child care costs comprise over one-quarter of poor families’ income (Smith, 2000), greatly exceeding the federal recommendation that families spend no more than 10% of their income on child care (USDHHS, 2009). Data also show that these costs are on the rise. The cost of child care since 2000 has increased twice as fast as the median income of families with children. In fact, the average increase for a four-year-old child in center care exceeds the rate of inflation in all states (NACCRRA, 2010). The high cost of child care poses a serious burden on the prospects for sustained employment and economic self-sufficiency particularly among low-income families. This burden became more severe with the passage of welfare reform in 1996, which shifted the focus of the social safety net from providing disadvantaged families with open-ended cash assistance to facilitating their transition from welfare to work. In order to expedite this transition, the new law consolidated the previously fragmented child care subsidy system into a single block grant, the Child Care and Development Fund (CCDF), and substantially increased funding for child care assistance.2 Consistent with the explicit goal of welfare reform to increase employment and reduce welfare caseloads, CCDF funds are now targeted primarily at low-income families participating in a state-defined work activity.3 Since most child care subsidy expenditures are made so that a parent may work, a child care subsidy increases the net return from employment by reducing this important work-related expense. Therefore, child care subsidies have long been recognized as an important policy tool to encourage employment among women with young children. Accordingly, researchers have dedicated substantial attention to the potential employment impact of these subsidies (e.g., Berger and Black, 1992, Blau and Hagy, 1998, Gelbach, 2002, Herbst, 2008, Tekin, 2005, Tekin, 2007a and Tekin, 2007b).4 Findings from these studies consistently show that child care subsidies increase employment and reduce welfare use among low-skilled women with children. Given the “work first” philosophy of welfare reform and the CCDF, the literature's focus on employment is not surprising. However, the law clearly allows parents to use child care subsidies while participating in a range of other work-related activities—including job training and education—as long as they meet the other eligibility criteria. Indeed, recent data show that a non-trivial fraction of subsidy-eligible parents engage in these activities. For example, using nationally representative data from the National Survey of America's Families (NSAF), Herbst (2008) finds that approximately 14% of eligible single mothers participate in job training programs and another 17% enroll in courses at the high school or college level. Schexnayder, Schroeder, Faliski, and McCoy (1999) provide direct evidence for Texas, finding that although most children receive subsidized care so that parents can work (62%), another 31% of children receive benefits to allow parents to attend job training or educational programs. Despite the fact that child care subsidies are available to low-income parents engaged in job training and education, very little attention has been paid to studying these human capital outcomes. To our knowledge, the only available evidence comes from Blau and Tekin (2007), who examine the impact of child care subsidy receipt on employment, school attendance, unemployment, and welfare participation among single mothers using data from the 1999 NSAF. The authors find that subsidy receipt has no statistically significant effect on the decision to attend school. Currently, no evidence exists on the relationship between subsidy receipt and participation in job training. In this paper, we attempt to fill this gap by analyzing the impact of child care subsidy receipt on single mothers’ decision to participate in education and job training programs using data from the Kindergarten cohort of the Early Childhood Longitudinal Study (ECLS-K). Our investigation is motivated by several factors. First, as described above, there is almost no evidence on the role played by subsidy policy in encouraging parents to attend school and engage in job training activities. Second, we argue that encouraging parents to participate in activities like schooling and job training is critical to the success of welfare reform. Among the intended goals of welfare reform is to “end the dependence of needy parents on government benefits by promoting job preparation, work, and marriage.”5 Clearly, the desirable outcome from the government's perspective is to enable parents to earn enough to meet their basic needs without public assistance of any kind, and the law recognizes that this goal cannot be accomplished through employment alone. Improving skills by investing human capital through activities like education and job training may be necessary to help low-income parents access better jobs. Therefore, it is important to provide insights into whether child care subsidies encourage investments in school and job training activities among recipient parents.

Child care subsidies constitute a key policy instrument used by the government to facilitate single mothers’ transition from welfare dependence to economic self-sufficiency. Despite the potential importance of human capital investments in increasing economic self-sufficiency among low-skilled individuals, the emphasis of state welfare and child care programs continues to be immediate job placement, with little attention given to the quality of these jobs and career advancement. Consequently, previous studies focus almost exclusively on the employment effects of child care subsidies, documenting sizeable positive effects. However, the CCDF allows parents to utilize child care subsidies for other work-related activities, including attending school or engaging in job training programs. The literature focusing on these outcomes is under-developed. In this paper, we attempt to fill this gap by analyzing the impact of child care subsidy receipt on the decision of single mothers to participate in education and job training. Using data from the ECLS-K, our results suggest that these subsidies do in fact encourage single mothers to engage in activities involving human capital investment. The employment focus of the current child care subsidy system is based on the assumption that the path to success in the labor market begins with accepting any job, even one that may not pay well and may not be full-time (Brown, 1997). This approach assumes that women who take low-wage and part-time jobs will eventually move into higher-wage and full-time jobs (Pavetti & Acs, 2001). However, a reasonable interpretation of the empirical evidence suggests that low-skilled workers do not enjoy large wage gains from direct work experience. For example, Holzer and LaLonde (2000) find that the most important types of job mobility in terms of generating wage growth are relatively uncommon among low-skilled women. In addition, studies focusing on welfare leavers show that employment in low-paying jobs with little wage growth is the norm (Cancian et al., 2000, Harris, 1996 and Peterson et al., 2002). On the other hand, our results suggest that even a work-first child care subsidy regime—emphasizing rapid movement into employment—can assist low-income mothers in using child care benefits as a pathway to upgrade skills and human capital. This finding is an encouraging sign for the success of welfare reform in helping the needy population achieve self-sufficiency in the long-run.