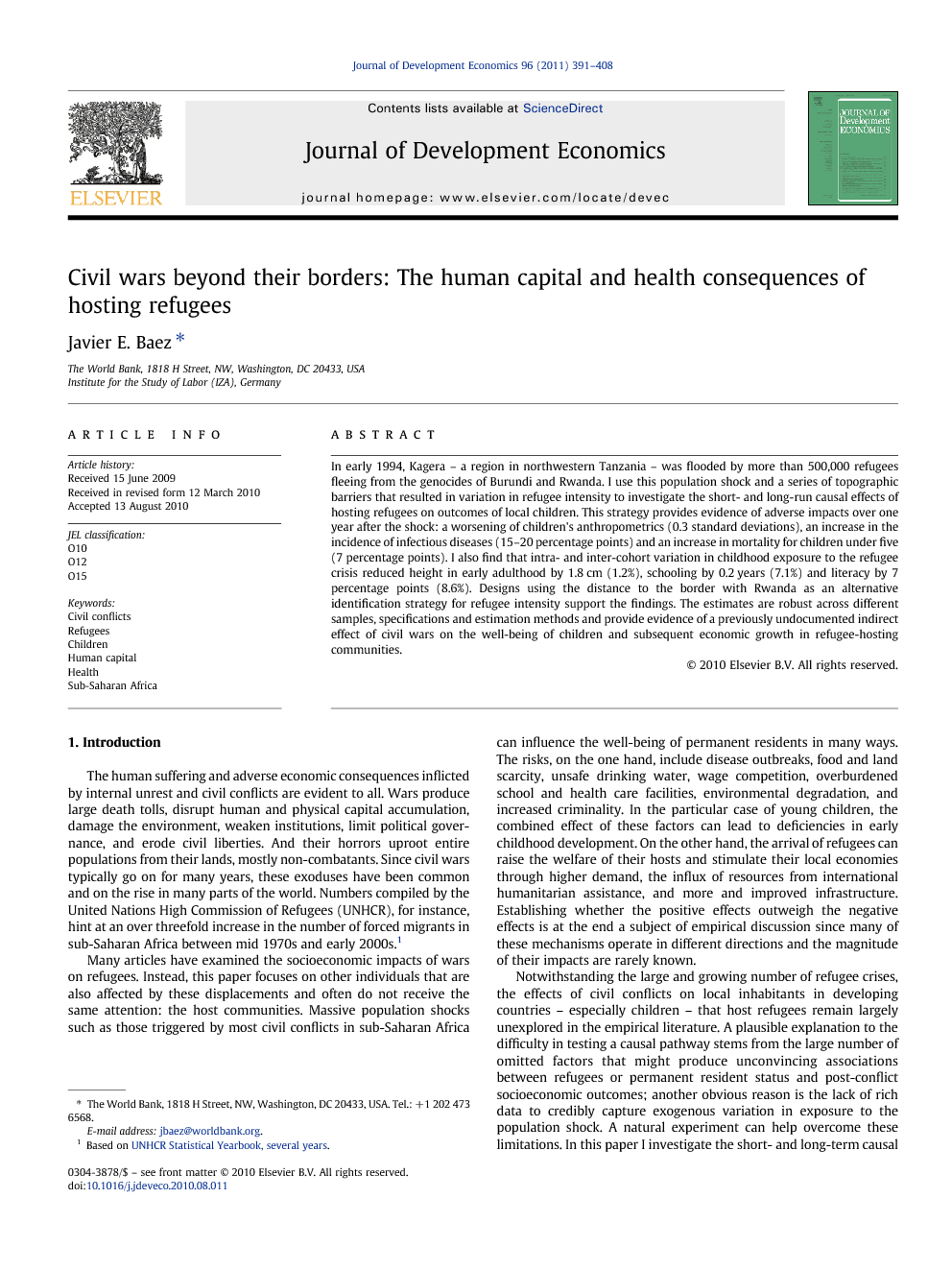 In early 1994, Kagera – a region in northwestern Tanzania – was flooded by more than 500,000 refugees fleeing from the genocides of Burundi and Rwanda. I use this population shock and a series of topographic barriers that resulted in variation in refugee intensity to investigate the short- and long-run causal effects of hosting refugees on outcomes of local children. This strategy provides evidence of adverse impacts over one year after the shock: a worsening of children's anthropometrics (0.3 standard deviations), an increase in the incidence of infectious diseases (15–20 percentage points) and an increase in mortality for children under five (7 percentage points). I also find that intra- and inter-cohort variation in childhood exposure to the refugee crisis reduced height in early adulthood by 1.8 cm (1.2%), schooling by 0.2 years (7.1%) and literacy by 7 percentage points (8.6%). Designs using the distance to the border with Rwanda as an alternative identification strategy for refugee intensity support the findings. The estimates are robust across different samples, specifications and estimation methods and provide evidence of a previously undocumented indirect effect of civil wars on the well-being of children and subsequent economic growth in refugee-hosting communities.

This paper joins previous efforts from an already growing literature that has been examining the contemporaneous and long-run impacts of health shocks suffered in early stages of life on human capital. To date, however, most of the shocks studied have been the result of natural disasters, idiosyncratic events or economic downturns but rarely of large-scale violent conflicts. The evidence of this study (jointly with recently emerging research) contributes to fill this gap by documenting an indirect and long-lasting negative effect of civil wars on the health status and human capital of non-combatant young children in refugee-hosting communities, and very likely on their future economic growth as well. I have presented a set of results that appear to be robust to different subsamples and measures of treatment as well as to alternative specifications, estimation methods and a variety of potentially contaminating issues. However, a major difficulty for papers based on micro-data from small regions lies in the generalization of their results. Despite the peculiar context that shaped the identification strategy followed in this paper (i.e. timing of events, geographic characteristics, location of refugee settlements), the qualitative direction of its findings can probably be extrapolated to refugee movements of similar magnitude in the developing world to shed some light on the possible impacts on the populations that receive them. In the last three decades, Sub-Saharan Africa has registered no less than 15 civil conflicts that have affected nearly three quarters of the countries in the region — not to mention internally displaced persons and the thousands of migrants fleeing political oppression. The socioeconomic characteristics of all these refugees and their hosting communities resemble to a large extent the conditions of vulnerability observed during the refugee crisis in the Kagera region: high levels of poverty, overpopulation, with most people being subsistence farmers and pastoralists that deal with erratic rains and face high levels of disease, malnutrition and death. The empirical findings have implications beyond the short-term. The evidence shows that the negative impacts of childhood exposure at the onset of the refugee migration persisted over time, at least until adolescence, and to some extent are probably irreversible. There is considerable evidence from developing countries consistent with this observation, showing that health shocks and growth lost in early childhood are not only partially offset later in life but correlated with cognitive development deficits, schooling attained, and body size in adulthood (Martorell and Schroeder, 1994). As individuals grow and enter their productive lives, detrimental impacts as the ones documented here can manifest themselves again through negative effects on labor market outcomes and economic productivity.36 These effects can be further exacerbated in rural communities where physical strength and healthiness are key determinants of adult work capacity in labor-intensive livestock and agricultural occupations — by far the most prominent activities in Kagera. Back of the envelope calculations using estimates from other authors give a sense of the magnitude of these costs: the worsening of 0.3 standard deviations in the height for age of children in Northwestern Tanzania could translate into a fall of 2.8% in their earnings in adulthood (based on the point estimates on the earnings-height elasticity for Brazil from Strauss and Thomas, 1997), whereas the reduction of 0.2 years in school attainment found for the affected cohort could account for as much as 7.5% lower wages by adulthood (based on the average returns to primary education in Sub-Saharan Africa summarized by Patrinos and Psacharopoulos, 2002). Finally, from a policy perspective, the results of this paper together with those of previous research offer evidence to promote and mobilize global assistance in the scale required. Unfortunately – but understandably to some extent – some low-income countries overburdened by hosting a large number of displaced people have imposed restrictions on the acceptance of more refugees in the past. Evidence arising from this paper could be argued to justify such actions. Closing the borders, however, is far from the solution. Instead, as the findings seem to suggest, what is needed is a more comprehensive response from international donors and aid agencies – assuming obviously that this assistance in fact works – to prevent that the welfare of civilians could be determined by their proximity to these events.