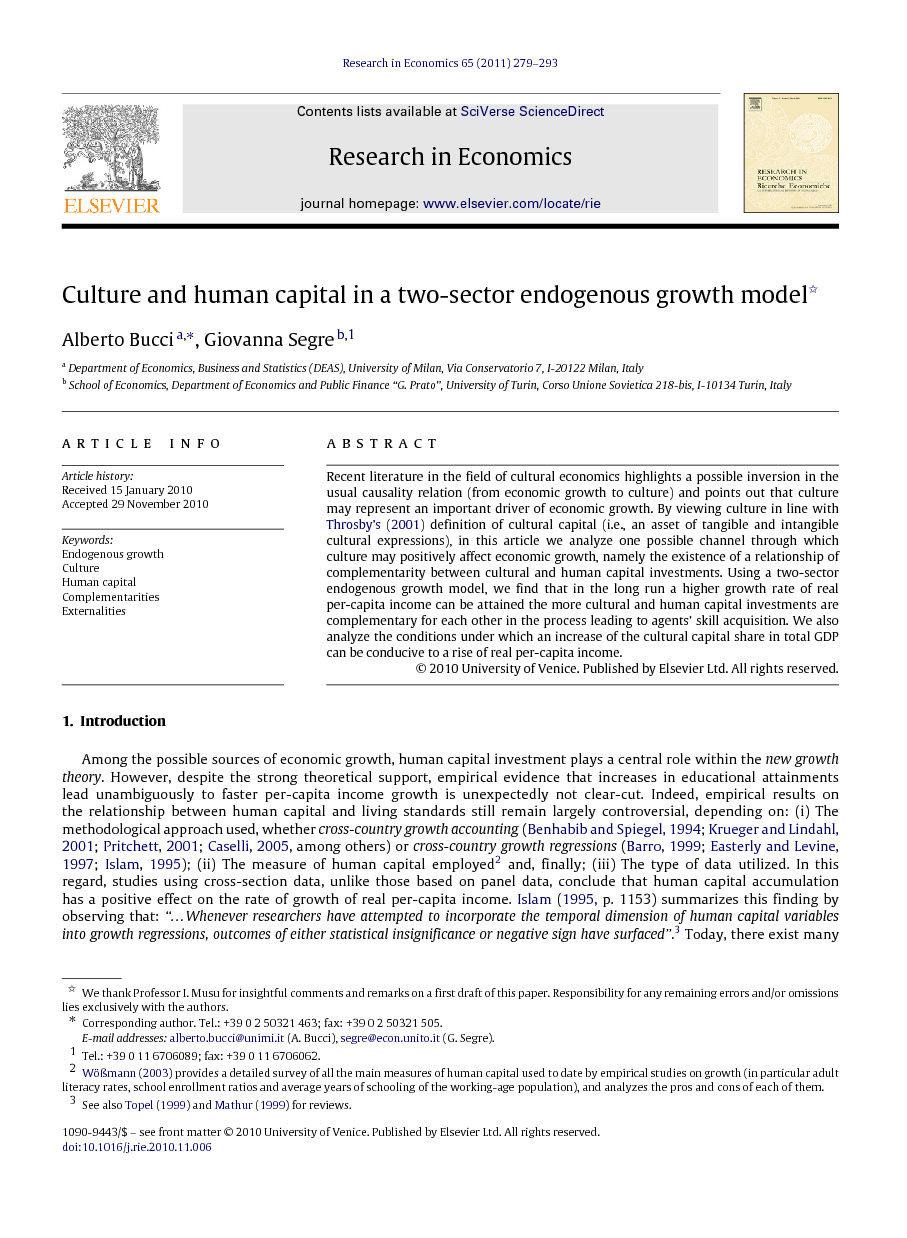 Recent literature in the field of cultural economics highlights a possible inversion in the usual causality relation (from economic growth to culture) and points out that culture may represent an important driver of economic growth. By viewing culture in line with Throsby’s (2001) definition of cultural capital (i.e., an asset of tangible and intangible cultural expressions), in this article we analyze one possible channel through which culture may positively affect economic growth, namely the existence of a relationship of complementarity between cultural and human capital investments. Using a two-sector endogenous growth model, we find that in the long run a higher growth rate of real per-capita income can be attained the more cultural and human capital investments are complementary for each other in the process leading to agents’ skill acquisition. We also analyze the conditions under which an increase of the cultural capital share in total GDP can be conducive to a rise of real per-capita income.

In industrialized countries competition no longer takes place simply through cost-cutting since product innovation represents a distinctive successful factor and an increasing number of goods and services incorporate an intangible added value arising from design, aesthetics, and symbolic values. Creativity, now considered as a collective process that overcomes the Romantic view of creative genius, and a talented labor force are essential drivers of economic growth. In such a framework, because cultural insight, imagination, and originality (whose main source is culture) become increasingly important, the simple use of knowledge (embodied in humans and attained through formal education) is no more sufficient to obtain efficacious patterns of productive employment and long-run, sustainable economic growth. By defining culture according to Throsby’s (2001) definition of cultural capital (i.e., an asset of tangible and intangible cultural expressions), in this paper we analyzed one possible channel through which this variable may positively affect per-capita income growth. At this aim we built a two-sector endogenous growth model where two different types of capital (human and cultural capital) can be accumulated over time. Since physical capital is assumed to be in fixed supply, the representative household uses all the income it does not consume just for cultural capital investment purposes. The first conclusion of the model is that the more cultural and human capital investments are complementary for each other, the higher the equilibrium growth rate of real per-capita income is over the long run. Moreover, we have also investigated the conditions for an increase of the cultural capital share in GDP to have a positive effect on real per capita income, namely that the stock of cultural capital existing at the economy-wide level produces congestion externalities and that there exists an upper-bound to its shadow-price. We think that the present analysis might be used as a basis for future empirical and theoretical works. Empirically, it would be of particular interest to analyze whether the two requirements just mentioned are in fact satisfied or not. From the theoretical point of view, instead, a very promising field of further research would be the development of a more sophisticated growth model capable of explaining the mechanics of the complementarity relationship between investment in cultural capital and access to skill-acquisition.