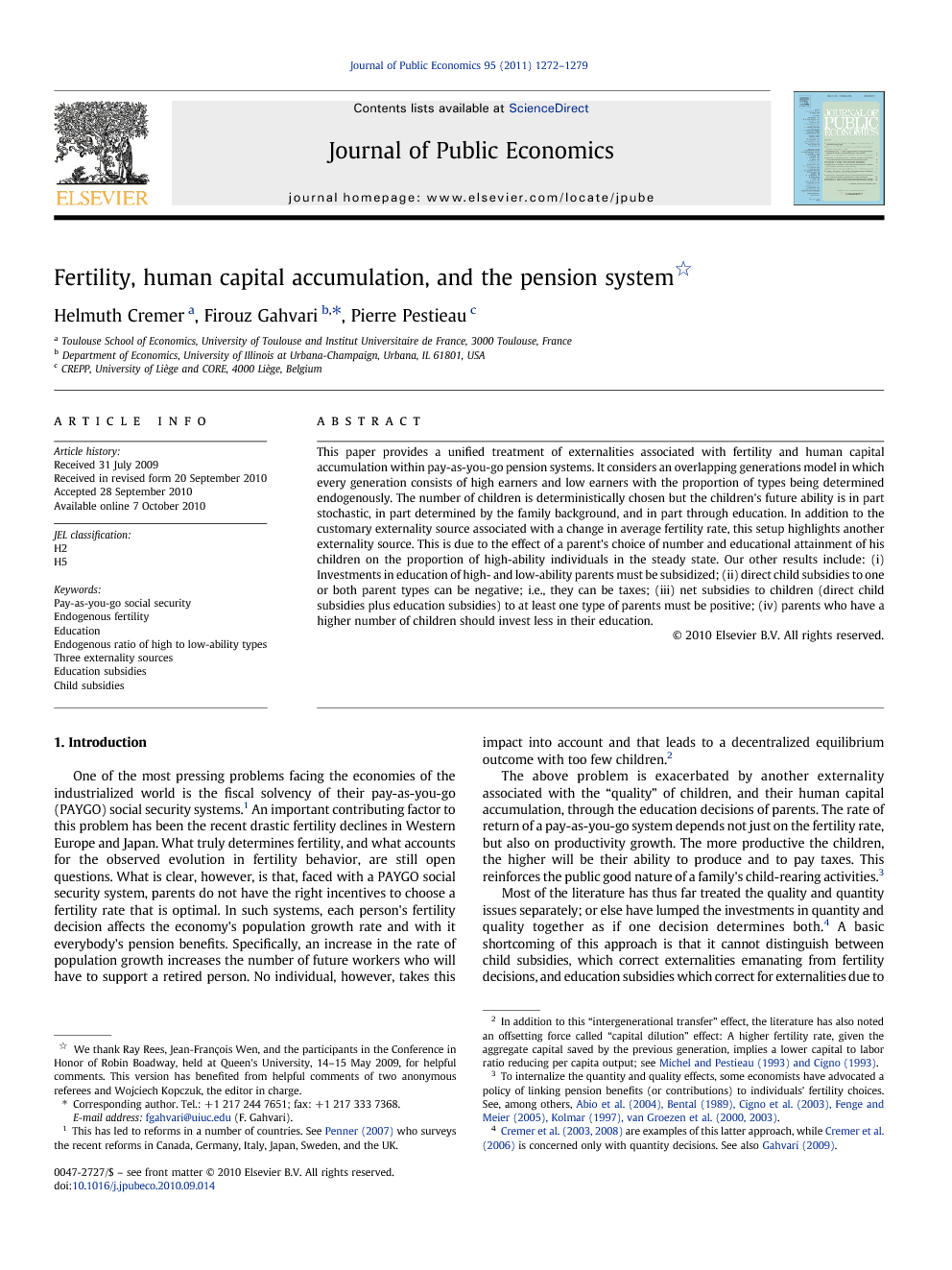 This paper provides a unified treatment of externalities associated with fertility and human capital accumulation within pay-as-you-go pension systems. It considers an overlapping generations model in which every generation consists of high earners and low earners with the proportion of types being determined endogenously. The number of children is deterministically chosen but the children's future ability is in part stochastic, in part determined by the family background, and in part through education. In addition to the customary externality source associated with a change in average fertility rate, this setup highlights another externality source. This is due to the effect of a parent's choice of number and educational attainment of his children on the proportion of high-ability individuals in the steady state. Our other results include: (i) Investments in education of high- and low-ability parents must be subsidized; (ii) direct child subsidies to one or both parent types can be negative; i.e., they can be taxes; (iii) net subsidies to children (direct child subsidies plus education subsidies) to at least one type of parents must be positive; (iv) parents who have a higher number of children should invest less in their education.

In discussing PAYGO pension plans, models with endogenous fertility have emphasized the positive externality that each person's fertility decision bestows on everybody by increasing everybody's pension benefits through a higher population growth rate. This type of externality, it has been argued, may be internalized through child subsidies. Similarly, models with endogenous human capital formation have emphasized the positive externality of investing in education of one's children (because parents cannot expropriate the children's extra earnings due to parents’ education expenditures). The same argument has been put forward in cases when parents build their own human capital which they subsequently pass on to their children. These types of externalities may be internalized through education subsidies. In this paper, we have combined the different externality sources to learn what their interactions teach us about the combination of child and education subsidies one must use to internalize them both. We have also been concerned with the question of heterogeneity of parents and how this may come into play in connection with externality-correcting policies. This is particularly relevant when child and education subsidies change the distribution of parent types. To this end, the paper has modeled endogenous fertility and human capital formation in an overlapping generations framework wherein every generation consists of high earners and low earners with the proportion of types being determined endogenously. We have found, among other results, that: (1)Investing in education of children by either type of parents increases the proportion of high-ability children in the economy and bestows a positive externality on everybody else. This externality has two components, one of which is specific to PAYGO pension plans. (2)Increasing the fertility rate of one type of parents increase the proportion of high-ability children in the economy and bestows a positive externality on everybody else. An increase in the fertility rate of the other type reduces the proportion of high-ability children and imposes a negative externality on everybody else. (3)The ambiguity in determining which parents impose a positive externality, and which ones a negative externality, by having more children is due to the fact that the type who has more children invests less in education. (4)Direct child subsidies and education subsidies both reduce the cost of raising children. Thus a subsidy to education is also a subsidy to fertility. The difference is that the education subsidy lowers the share of education cost in the fertility subsidy. On the other hand, a subsidy to children is “neutral” between the two sources of costs. (5)Investments in education of high- and low-ability parents must always be subsidized because they entail positive externalities. (6)Direct child subsidies to one or both parent types can be negative; i.e., they can be taxes. (7) Net subsidies to children of a particular parent type (direct child subsidies plus education subsidies) must be set equal to the net externalities associated with increasing the fertility rate of that type. Net child subsidies to at least one type of parents must be positive; net child subsidies to the other type can be positive or negative. As a final observation, we remind our readers that our study has been conducted in a first-best environment. Although the main thrust of our observations should carry over to second-best environments wherein educational investments and/or types are not publicly observable, other interesting issues would also surface. We have left the examination of these other issues to a subsequent paper.