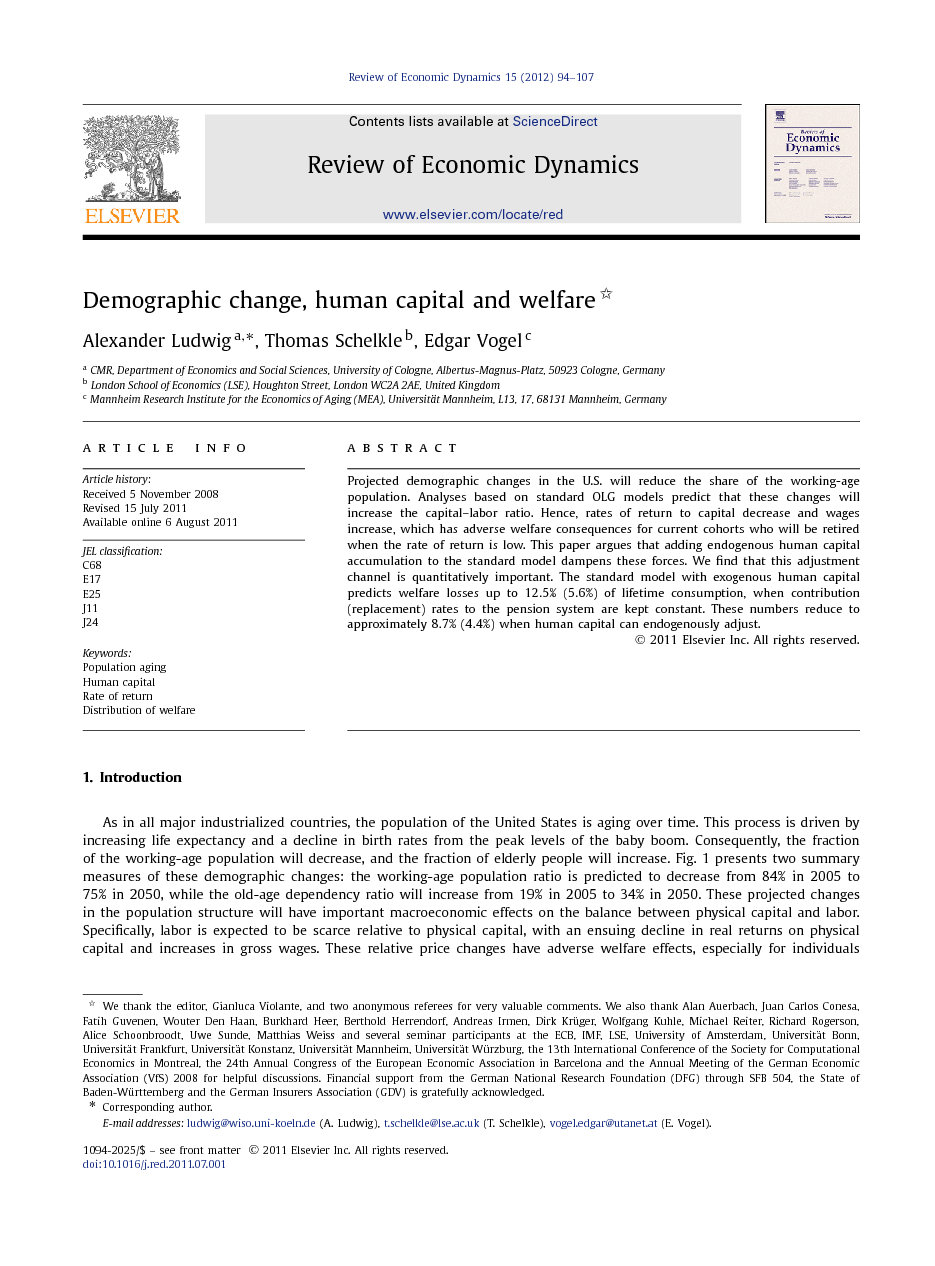 Projected demographic changes in the U.S. will reduce the share of the working-age population. Analyses based on standard OLG models predict that these changes will increase the capital–labor ratio. Hence, rates of return to capital decrease and wages increase, which has adverse welfare consequences for current cohorts who will be retired when the rate of return is low. This paper argues that adding endogenous human capital accumulation to the standard model dampens these forces. We find that this adjustment channel is quantitatively important. The standard model with exogenous human capital predicts welfare losses up to 12.5%12.5% (5.6%5.6%) of lifetime consumption, when contribution (replacement) rates to the pension system are kept constant. These numbers reduce to approximately 8.7%8.7% (4.4%4.4%) when human capital can endogenously adjust.

As in all major industrialized countries, the population of the United States is aging over time. This process is driven by increasing life expectancy and a decline in birth rates from the peak levels of the baby boom. Consequently, the fraction of the working-age population will decrease, and the fraction of elderly people will increase. Fig. 1 presents two summary measures of these demographic changes: the working-age population ratio is predicted to decrease from 84% in 2005 to 75% in 2050, while the old-age dependency ratio will increase from 19% in 2005 to 34% in 2050. These projected changes in the population structure will have important macroeconomic effects on the balance between physical capital and labor. Specifically, labor is expected to be scarce relative to physical capital, with an ensuing decline in real returns on physical capital and increases in gross wages. These relative price changes have adverse welfare effects, especially for individuals close to retirement because they receive a lower return on their assets accumulated for retirement and cannot profit from increased wages. This paper argues that a strong incentive to invest in human capital emanates from the combined effects of increasing life expectancy and changes in relative prices, particularly if social-security systems are reformed such that contribution rates remain constant. At general equilibrium, such endogenous human capital adjustments substantially mitigate the effects of demographic change on macroeconomic aggregates and individual welfare. The key contribution of our paper is to show that the human capital adjustment mechanism is quantitatively important. We add endogenous human capital accumulation to an otherwise standard large-scale OLG model in the spirit of Auerbach and Kotlikoff (1987). The central focus of our analysis is then to work out the differences between our model, with en- dogenous human capital adjustments and endogenous labor supply, and the “standard” models in the literature, with fixed (exogenous) productivity profiles. We find that the decrease of the return to physical capital induced by demographic change in a model with endogenous human capital is only one-third of that predicted in the standard model. Welfare consequences from increasing wages, declines in rates of return, changes to pension contributions and benefits induced by demographic change are substantial. When human capital cannot adjust, some of the agents alive in 2005 will experience welfare losses up to 12 . 5% (5 . 6%) of lifetime consumption with constant pension contribution (replacement) rates. However, importantly, we find that these maximum losses are only 8 . 7% (4 . 4%) of lifetime consumption when the human capital adjustment mechanism is taken into account. Ignoring this adjustment channel thus leads to quantitatively important biases of the welfare assessment of demographic change. Our work relates to a vast number of papers that have analyzed the economic consequences of population aging and possible adjustment mechanisms. Important examples in closed economies with a focus on social-security adjustments in- clude Huang et al. (1997), De Nardi et al. (1999) and, with respect to migration, Storesletten (2000). In open economies, Börsch-Supan et al. (2006), Attanasio et al. (2007) and Krüger and Ludwig (2007), among others, investigate the role of in- ternational capital flows during a demographic transition. We add to this literature by highlighting an additional mechanism through which households can respond to demographic change. Our paper is closely related to the theoretical work on longevity, human capital, taxation and growth 1 and to Fougère and Mérette (1999) and Sadahiro and Shimasawa (2002), who also quantitatively investigate demographic change in large- scale OLG models with individual human capital decisions. In contrast to their work, we focus our analysis on relative price changes during a demographic transition and therefore consider an exogenous growth specification. 2 We also extend their analysis along various dimensions. We use realistic demographic projections instead of stylized scenarios. More importantly, our model contains a labor supply–human capital formation–leisure trade-off. It can thus capture effects from changes in individual labor supply, i.e., human capital utilization, on the return of human capital investments. As has already been stressed by Becker (1967) and Ben-Porath (1967), it is important to model human capital and labor supply-decisions jointly in a life-cycle framework. Along this line, a key feature of our quantitative investigation is to employ a Ben-Porath (1967) human capital model and calibrate it to replicate realistic life-cycle wage profiles. 3 Furthermore, we place particular empha- sis on the welfare consequences of an aging population for households living through the demographic transition. The paper is organized as follows. In Section 2, we present our quantitative model. Section 3 describes the calibration strategy and our computational solution method. Our results are presented in Section 4. Finally, Section 5 concludes the paper. A separate online appendix (see section Supplementary material) contains additional results, robustness checks, a description of our demographic model and technical details.

This paper finds that increased investments in human capital may substantially mitigate the macroeconomic impact of demographic change, with profound implications for individual welfare. As labor will be relatively scarce and capital will be relatively abundant in an aging society, interest rates will fall. As we emphasize, these effects will be much smaller once we account for changes in human capital formation. For the U.S., our simulations predict that if contribution rates (replacement rates) are held constant, then the rate of return will fall by only 0 . 5 ( 0 . 9 ) percentage points until 2025 with endogenous human capital, compared to 1 . 2(1 . 3) percentage points in the standard model with a fixed human capital profile. We also document that the increase in wages, declines in rates of return and changes to pension contributions and benefits induced by demographic change have substantial welfare consequences. When human capital cannot adjust, some of the agents alive in 2005 will experience welfare losses of up to 12 . 5% (5 . 6%) of lifetime consumption with constant contribution (replacement) rates. However, importantly, we find that these maximum losses are only 8 . 7% (4 . 4%) of lifetime consumption when the human capital adjustment mechanism is taken into account. However, we have operated in a frictionless environment, where all endogenous human capital adjustments are driven by relative price changes. If, instead, human capital formation is affected by market imperfections, such as borrowing con- straints, then these automatic adjustments will be inhibited. In this case, appropriate education and training policies in aging societies are an important topic for future research and the policy agenda.