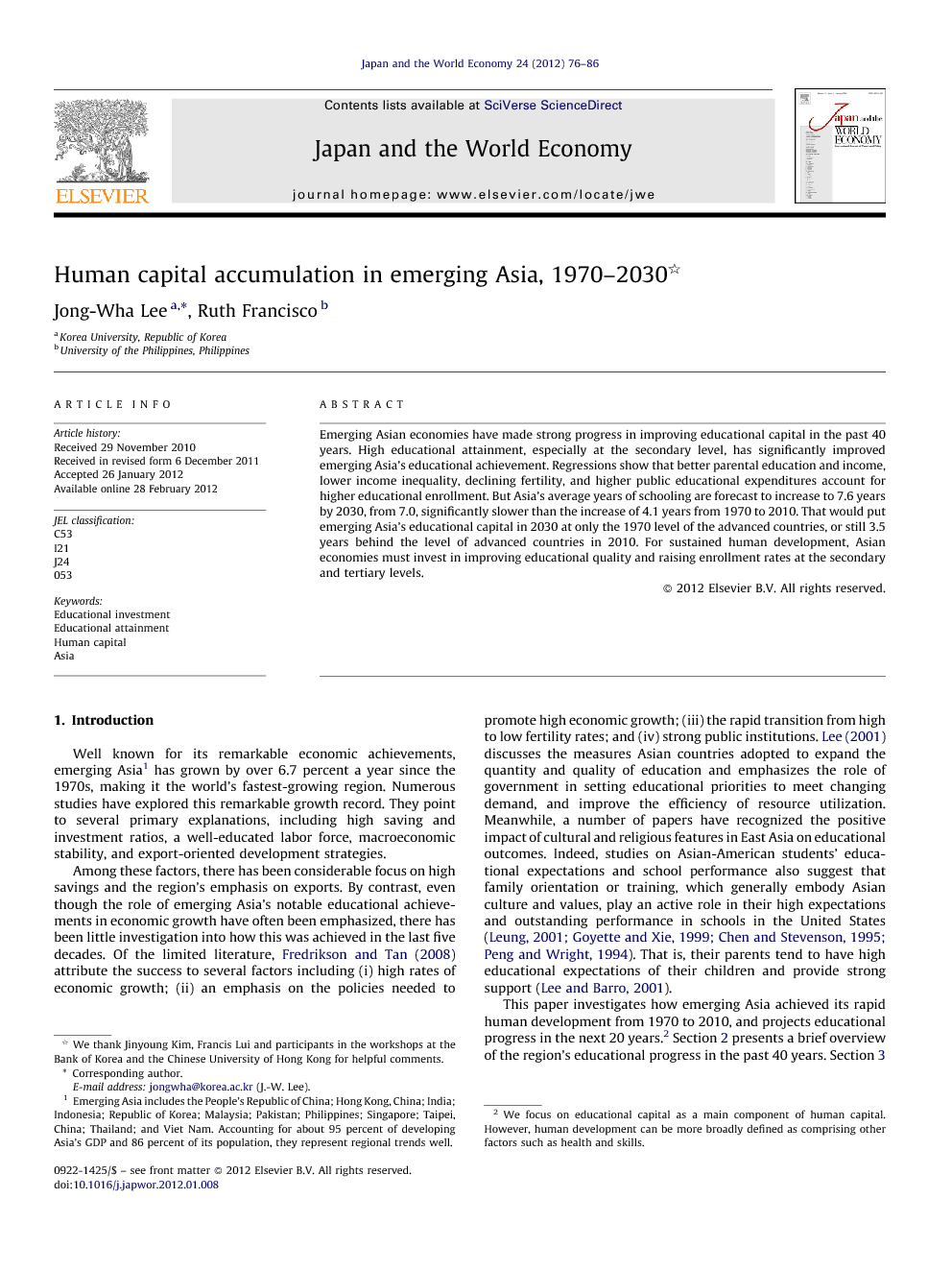 Emerging Asian economies have made strong progress in improving educational capital in the past 40 years. High educational attainment, especially at the secondary level, has significantly improved emerging Asia's educational achievement. Regressions show that better parental education and income, lower income inequality, declining fertility, and higher public educational expenditures account for higher educational enrollment. But Asia's average years of schooling are forecast to increase to 7.6 years by 2030, from 7.0, significantly slower than the increase of 4.1 years from 1970 to 2010. That would put emerging Asia's educational capital in 2030 at only the 1970 level of the advanced countries, or still 3.5 years behind the level of advanced countries in 2010. For sustained human development, Asian economies must invest in improving educational quality and raising enrollment rates at the secondary and tertiary levels.

Well known for its remarkable economic achievements, emerging Asia1 has grown by over 6.7 percent a year since the 1970s, making it the world's fastest-growing region. Numerous studies have explored this remarkable growth record. They point to several primary explanations, including high saving and investment ratios, a well-educated labor force, macroeconomic stability, and export-oriented development strategies. Among these factors, there has been considerable focus on high savings and the region's emphasis on exports. By contrast, even though the role of emerging Asia's notable educational achievements in economic growth have often been emphasized, there has been little investigation into how this was achieved in the last five decades. Of the limited literature, Fredrikson and Tan (2008) attribute the success to several factors including (i) high rates of economic growth; (ii) an emphasis on the policies needed to promote high economic growth; (iii) the rapid transition from high to low fertility rates; and (iv) strong public institutions. Lee (2001) discusses the measures Asian countries adopted to expand the quantity and quality of education and emphasizes the role of government in setting educational priorities to meet changing demand, and improve the efficiency of resource utilization. Meanwhile, a number of papers have recognized the positive impact of cultural and religious features in East Asia on educational outcomes. Indeed, studies on Asian-American students’ educational expectations and school performance also suggest that family orientation or training, which generally embody Asian culture and values, play an active role in their high expectations and outstanding performance in schools in the United States (Leung, 2001, Goyette and Xie, 1999, Chen and Stevenson, 1995 and Peng and Wright, 1994). That is, their parents tend to have high educational expectations of their children and provide strong support (Lee and Barro, 2001). This paper investigates how emerging Asia achieved its rapid human development from 1970 to 2010, and projects educational progress in the next 20 years.2 Section 2 presents a brief overview of the region's educational progress in the past 40 years. Section 3 reviews the empirical literature on the determinants of human capital investment, and examines the empirical relationship between school enrollment rates and income and non-income factors. Section 4 discusses the estimation methodology for generating educational projections and presents our projections of educational attainment of estimates for 2015–2030. The final section provides concluding remarks.

Along with its remarkable economic growth, emerging Asia has also shown strong progress in educational capital in the past 40 years. Among the population aged 15 years and above, average years of schooling increased by 4.1 years, to 7 years in 2010 from only 2.9 years in 1970. Emerging Asia's rapid educational growth is mainly due to the outstanding improvements in enrollment at the primary and secondary levels, supported by its relatively young population structure. Nonetheless, while overall progress was strong, substantial gaps in educational attainment still exist among emerging Asian countries as well as between emerging Asia and the advanced countries. Based on our estimates, the proportion of those with no education in the population aged 15 years and above in emerging Asia is expected to decline at a more limited pace (from 17.4 percent in 2010 to 15 percent by 2030). The proportion of those who attained only primary education is expected to decline from 25.9 percent to 22.2 percent by 2030, while those reaching the secondary level will increase to 51.8 percent and the tertiary level to 11.1 percent. Overall, emerging Asia's average years of schooling is expected to increase from 7 years in 2010 to 7.6 years by 2030, a significant deceleration from the 4.1-year increase from 1970 to 2010. Our regression analysis indicates that parental income and education improve investment in children's education. Our results also confirm that primary and secondary enrollment rates increase with lower fertility, and that lower income inequality and higher current public education expenditure promote higher enrollment rates, although, significantly, only at the secondary level. Based on these results we conclude that the remarkable economic development of East Asia, along with increasing average years of schooling, lower income inequality, and declining fertility rates, account for the outstanding improvements in emerging Asia's enrollment at the primary and secondary levels that brought about significant progress in emerging Asia's educational capital. Our projections of estimates of educational attainment provide a reasonable proxy of educational capital in emerging Asia for 2015–2030. However, they account neither for the effects of international migration or lifelong learning, nor for differences in the quality of schooling across countries. Also, our estimates are for total population only and do not investigate the differences in educational progress between males and females. These issues will be addressed in our subsequent research.