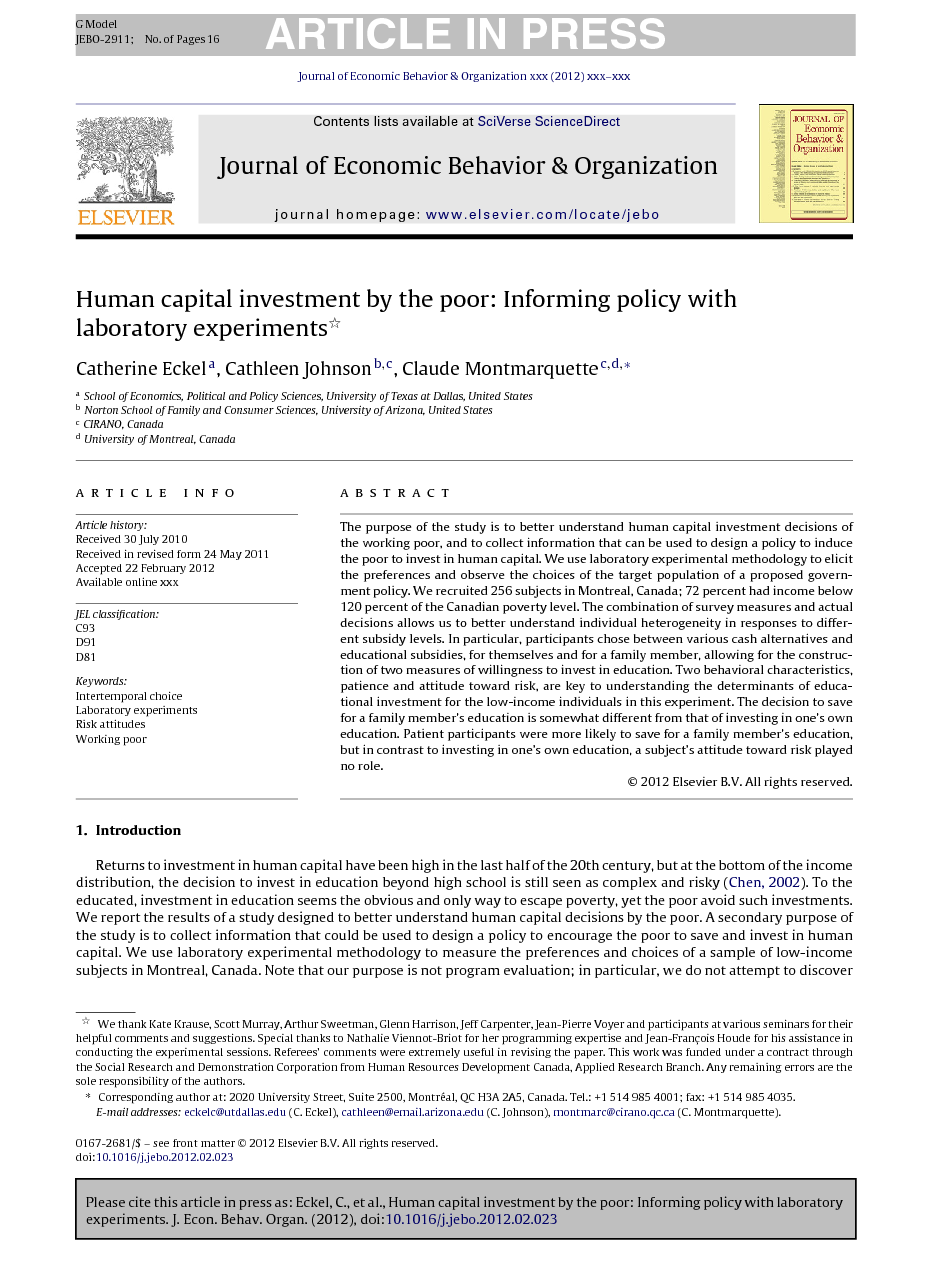 The purpose of the study is to better understand human capital investment decisions of the working poor, and to collect information that can be used to design a policy to induce the poor to invest in human capital. We use laboratory experimental methodology to elicit the preferences and observe the choices of the target population of a proposed government policy. We recruited 256 subjects in Montreal, Canada; 72 percent had income below 120 percent of the Canadian poverty level. The combination of survey measures and actual decisions allows us to better understand individual heterogeneity in responses to different subsidy levels. In particular, participants chose between various cash alternatives and educational subsidies, for themselves and for a family member, allowing for the construction of two measures of willingness to invest in education. Two behavioral characteristics, patience and attitude toward risk, are key to understanding the determinants of educational investment for the low-income individuals in this experiment. The decision to save for a family member's education is somewhat different from that of investing in one's own education. Patient participants were more likely to save for a family member's education, but in contrast to investing in one's own education, a subject's attitude toward risk played no role.

Returns to investment in human capital have been high in the last half of the 20th century, but at the bottom of the income distribution, the decision to invest in education beyond high school is still seen as complex and risky (Chen, 2002). To the educated, investment in education seems the obvious and only way to escape poverty, yet the poor avoid such investments. We report the results of a study designed to better understand human capital decisions by the poor. A secondary purpose of the study is to collect information that could be used to design a policy to encourage the poor to save and invest in human capital. We use laboratory experimental methodology to measure the preferences and choices of a sample of low-income subjects in Montreal, Canada. Note that our purpose is not program evaluation; in particular, we do not attempt to discover the return to additional human capital investment or to assess whether a policy to subsidize human capital acquisition by the poor would be cost-effective. Instead we collect information that could be used to improve the design of such a policy by eliciting preferences for education using actual choices between cash and funds designated for education expenses, and assessing the response of the investment decisions of the poor population to various subsidy levels. Our study is part of a growing emphasis on laboratory experiments in field settings that focus on low-income populations, primarily in developing countries (e.g., Ashraf, 2009, Binswanger, 1980, de Oliveira et al., 2011, Harrison et al., 2009, Karlan, 2005, Meier and Sprenger, 2010 and Tanaka et al., 2010. See also Banerjee and Duflo, 2008 and Cardenas and Carpenter, 2008 for overviews.). In particular, we use incentivized decisions as tools in the field to elicit the underlying preferences of the poor for investment in human capital. In general, this approach is potentially fruitful for collecting information in order to design, calibrate, and estimate the impact and cost of specific government policies.1 Gauging the response of the target population in a lab setting can help policy makers estimate the response to specific policy parameters. Our study has several key characteristics. First, our subjects are the target population for a proposed policy intervention in Canada: the adult working poor. We recruited 256 subjects in Montreal, Canada; 72 percent had income below 120 percent of the Canadian poverty level.2 Thus we examine the response of subjects who represent the population of interest to policy makers, and gauge their responsiveness to a range of parameters. Second, the study combines attitudinal survey questions with incentivized choices. The experiments are of two types: one type involves decisions that are designed to measure the subjects’ risk attitudes and time preferences; the second type consists of decisions designed to elicit willingness to invest in education for themselves or for family members. In this second set of choices, subjects choose between cash amounts and higher amounts that are earmarked for educational investment. The survey collects demographic characteristics and other control variables. The combination of survey measures and actual decisions allows us to better understand individual heterogeneity in responses to different subsidy levels. A third factor is that the experiments, especially those involving actual human capital decisions, involve high stakes. Previous studies have shown the importance of using significant stakes in eliciting preferences (Binswanger, 1980, Holt and Laury, 2002 and Slonim and Roth, 1998). Subjects make 63 decisions, with $25–$600 CA at stake: at the end of the experiment, one decision is chosen randomly for payment. Average earnings were $147 including a $12 show-up fee. For the investment decisions, the incentives are high enough that subjects could increase human capital investment by taking one or more courses at a Montreal technical, career, trade or community college.3 Our data permit a rich analysis of the decision to invest in human capital, including important control variables not available in other studies. Controlling for demographic characteristics such as age, sex, family structure and income, we can examine the role of risk attitudes and time preference in the investment decision. We also can test for the responsiveness of various subsets of the poor population to subsidies targeted toward their own education as well as that of their children, conditional on their underlying preferences. Two behavioral characteristics, patience and attitude toward risk, are key to understanding the determinants of educational investment for the low-income individuals in this experiment. On average 65 percent of the least patient subjects never chose to invest in education compared with only 24 percent of the most patient subjects. The younger, more risk-taking subjects are far more likely to choose educational expense over cash. On average 41 percent chose funds earmarked for educational expenses over a cash alternative in all cases when offered in the experiment, whereas their older and more risk-averse counterparts exhibited this behavior only 15 percent of the time. The decision to invest for a family member's education is somewhat different from that of investing in one's own education. Patient participants were more likely to choose a family member's education, but in contrast to investing in one's own education, a subject's attitude toward risk played no role. In Section 2, we discuss the human capital decision of the adult poor. In Section 3, we present our research design and methods. The experimental results are discussed in Section 4. A concluding section ends the paper.

This study makes use of methodology developed for lab experiments to measure preferences and choices of the target population of a proposed government policy. The experiment was initiated to inform the design of the Canadian learn$ave project, which was promoted to encourage low-income people to save money to invest in human capital. In this section we summarize the main findings of the study and their implications for a policy designed to induce the poor to save for investment in human capital – for themselves and for family members. Based on the study's results, we conclude that a sizable proportion of the working poor would invest in human capital if the investment were sufficiently subsidized. The more the investment was subsidized, the more likely individuals were to invest. When subjects were presented with the opportunity analogous to the learn$ave matching offer ($400 in educational expenses or $100 in cash), 44 percent of subjects accepted the offer of education, almost double the proportion of subjects willing to invest at the lower matching rate of 1/1. Because these results entail giving up “house money” rather than their own earned income, they may slightly overstate subjects’ willingness to forego current income for an investment in education.22 Many of the subjects chose not to invest, even at the highest subsidy rate of 5/1: At this rate, 45.4 did not invest in their own human capital, and 52.1 did not invest in a family member's education. This study also has implications for programs designed to encourage saving more generally. Many subjects were willing to delay consumption for substantial returns. Subjects were asked to choose between smaller payments sooner or larger payments later. For the participants in the study, choosing the larger payment later is analogous to saving. The subject must forego near-current consumption to receive future consumption. Delaying the sooner payoff – pushing it farther into the future – reduced the incentive to pick the later alternative even when the rate of return was held constant. More research is warranted, but these results suggest that savings programs that allow frequent withdrawals (to accelerate reward) and stress absolute difference in monetary gains as well as rate of return will fare better than those that do not. When the stakes were high, subjects were quite risk averse. Because many low-income individuals, including a large fraction of our subjects, purchase lottery tickets, an action that is normally associated with risk-seeking attitudes, one might expect the poor to exhibit greater risk-seeking behavior in lab-based decisions such as these. The risk measures developed in this paper were not correlated with whether subjects bought lottery tickets, suggesting that attitudes toward risk might be more contextual than is often thought. In this experiment, the context of the monetary gambles offered as choices to the subjects had substantial stakes to be risked ($60–$120) for modest gains. This is perhaps a better indicator of one's risk aversion with regard to educational investment than the mere observation of behavior toward lottery ticket purchases.23 Eliciting patience and risk aversion helps us to inform the larger question: Will the working poor respond to incentives to save to invest in human capital? The more patient participants were, the more likely they were to invest in their own education. The more risk-averse subjects were, the less likely they were to invest in their own education. These subjects appear to view foregoing a certain cash in exchange for a multiple of that cash in funds for educational expenses as a risky alternative. In addition, younger subjects were more likely to invest in education.24 Perhaps those with recent education experience were better able to assess the risk and potential return involved in an investment in education. The decision to save for a family member's education is somewhat different from that of investing in one's own education. Again, patient participants were more likely to save for a family member's education, but in contrast to investing in one's own education, a subject's attitude toward risk played no role. The education of a family member does not involve a risky situation for the subject, as such. Two behavioral characteristics that are typically not observed in policy evaluations, patience and attitude toward risk, are key to understanding the determinants of educational investment for the low-income individuals in this experiment. More research is needed to understand the structure of the risk in investing in education and the factors that can develop a more forward-looking, patient view of savings and investment.