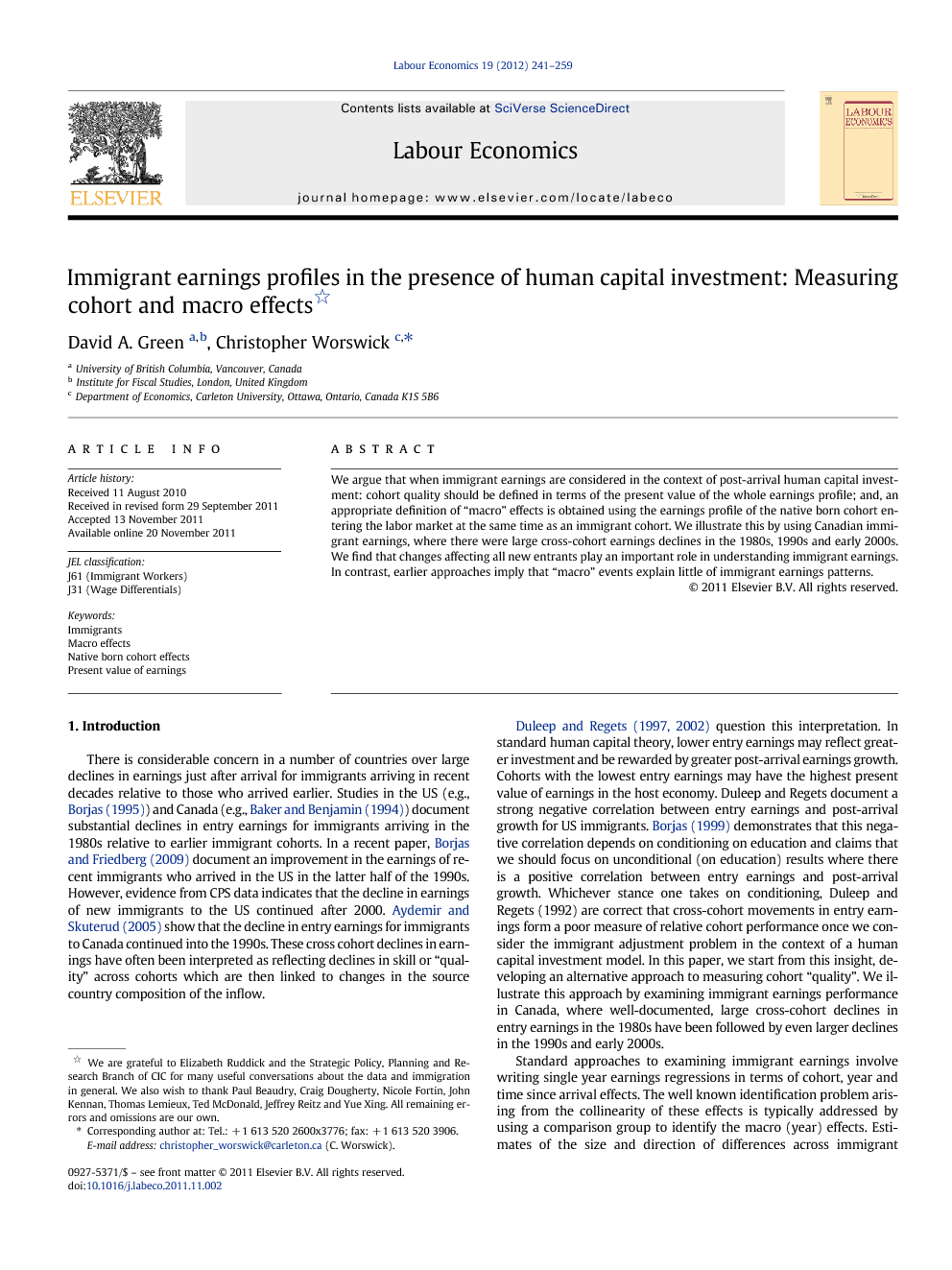 We argue that when immigrant earnings are considered in the context of post-arrival human capital investment: cohort quality should be defined in terms of the present value of the whole earnings profile; and, an appropriate definition of “macro” effects is obtained using the earnings profile of the native born cohort entering the labor market at the same time as an immigrant cohort. We illustrate this by using Canadian immigrant earnings, where there were large cross-cohort earnings declines in the 1980s, 1990s and early 2000s. We find that changes affecting all new entrants play an important role in understanding immigrant earnings. In contrast, earlier approaches imply that “macro” events explain little of immigrant earnings patterns.

Following discussions in Duleep and Regets, 1997, Duleep and Regets, 2002 and Borjas, 1999, we argue that immigrant earnings profiles in the host country should be viewed in the context of a life-cycle model of human capital acquisition. Within that context, we argue that the best comparison group defining the impact of general macro events on immigrants consists of native born workers who enter the host labor market at the same time as the immigrants. We present evidence suggesting that native born new entrants provide an appropriate comparison for both older and younger age at arrival immigrants. Further, we argue that a true representation of cross-cohort differences in immigrant contributions of human capital to the host economy must be done in the context of the present value of earnings in the host economy rather than, as is typically done, by comparing earnings at the time of arrival. We examine the importance of these comparison group and earnings measure decisions using a unique Canadian dataset that matches immigrant arrival records with tax data. Using a standard estimation approach we find, as is well known, that entry earnings for successive immigrant cohorts fell substantially over the 1980s. Further, we find that entry earnings fell even faster in the 1990s. We show that substantial declines in returns to foreign experience play an important role in these declines. Most importantly, when we use the native born cohorts as comparison groups and work with present values of earnings streams, we find that much of the decline earnings across immigrant cohorts entering Canada in the 1980s and 1990s can be accounted for as part of a general decline facing all new entrant workers. This suggests that the answers to how to better integrate immigrant human capital into the Canadian economy may lie more in policies targeting new labor market entrants in general than in policies targeted exclusively at immigrants and that part of our concern over immigrant earnings should be redirected to the broader issue of difficulties facing all new entrants.