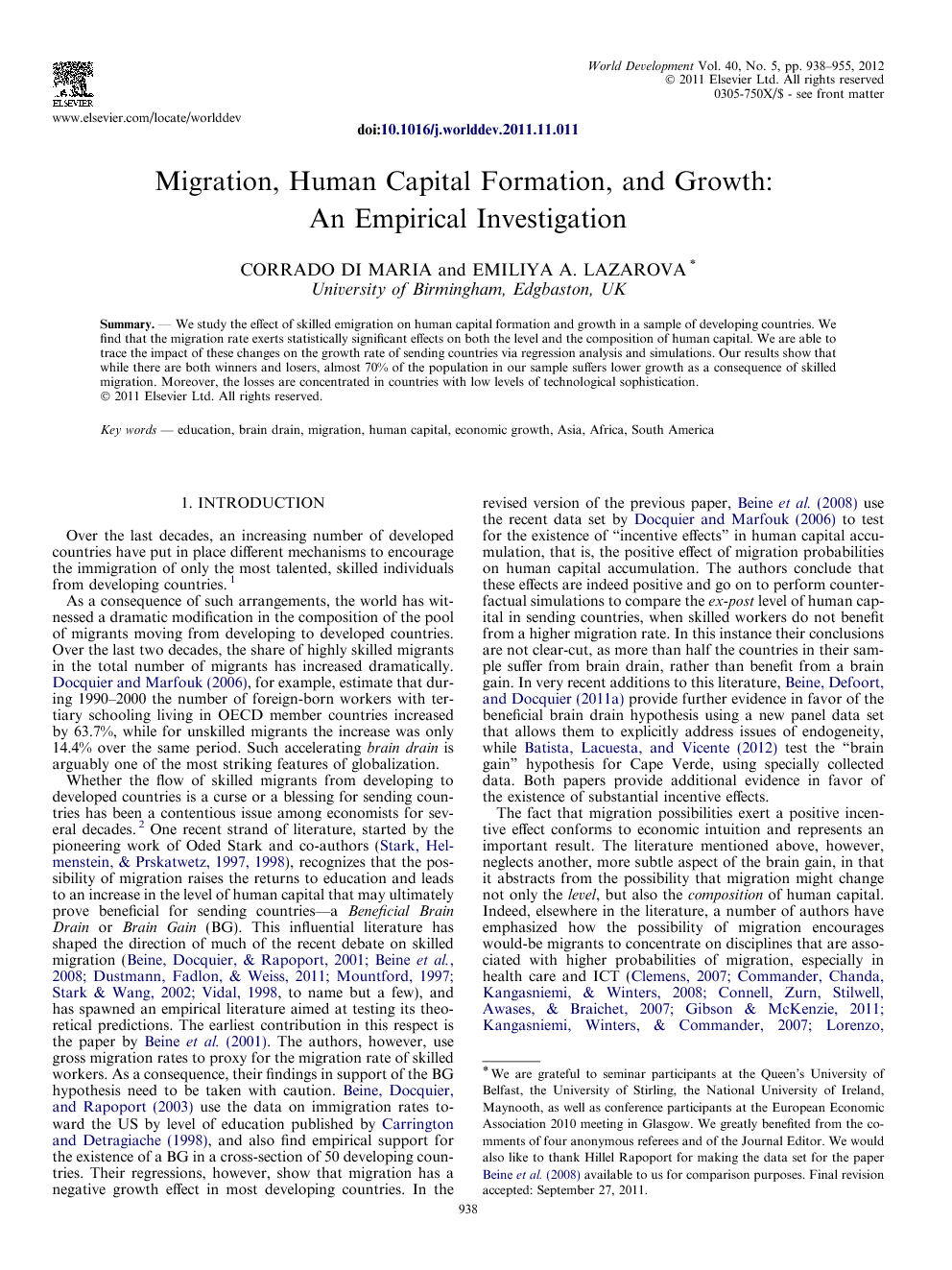 We study the effect of skilled emigration on human capital formation and growth in a sample of developing countries. We find that the migration rate exerts statistically significant effects on both the level and the composition of human capital. We are able to trace the impact of these changes on the growth rate of sending countries via regression analysis and simulations. Our results show that while there are both winners and losers, almost 70% of the population in our sample suffers lower growth as a consequence of skilled migration. Moreover, the losses are concentrated in countries with low levels of technological sophistication.

By bridging two strands of literature, that on the economic consequences of brain drain, and the growth one focussing on the role of human capital formation, we provide several new insights on the relation between migration, human capital formation and growth. First, we find support for the existence of an incentive effect on the level of (ex-ante) human capital accumulation. Second, we present evidence that the possibility of migration also affects the types of skills that agents choose to acquire. This underscores that the level effect exists alongside a composition effect. Third, in line with our theoretical priors, we show that both these effects depend on the level of technological development of the sending country (its proximity to the frontier). Differences in wages and the degree of marketability of migrants’ skills depend on the level of technological development, thus the effect of migration needs to be discussed taking explicitly into account the technological gap of each sending country. Fourth, our simulations show that more than one third of the countries in our data set, representing almost 70% of the total population, suffer as a result of an increase in skilled migration. The losers are found among the relative less developed countries, implying that, overall, the welfare costs of skilled migration may be large. As is the case for any empirical endeavor, our results are highly influenced by the quality of the data used. In this respect, data on educational attainment by field of study leave much to be desired, especially when focussing on nonOECD countries as we do. The need to invest resources in the generation of better data to help empirical research cannot be overstated in this field. Despite this caveat, our analysis provides clear empirical support to the claim made by developing countries that recent immigration policies of OECD countries may have dire consequences for the migrants’ countries of origin. While selecting the most talented individuals from developing countries has a clear economic rationale for destination countries, our work focuses on its implications for sending countries: by changing both the level and the composition of human capital, an increase in the possibility of migration for (certain types of) skilled workers reduces the growth rate of TFP in many source countries. We draw two conclusions from our work. First, we stress the need for better quality data to support additional research efforts in this area, to test the robustness of our findings, and to better inform the policy process. Second, based on our findings, the need for a more concerted approach to migration policy among developed and developing countries emerges very starkly from our analysis.