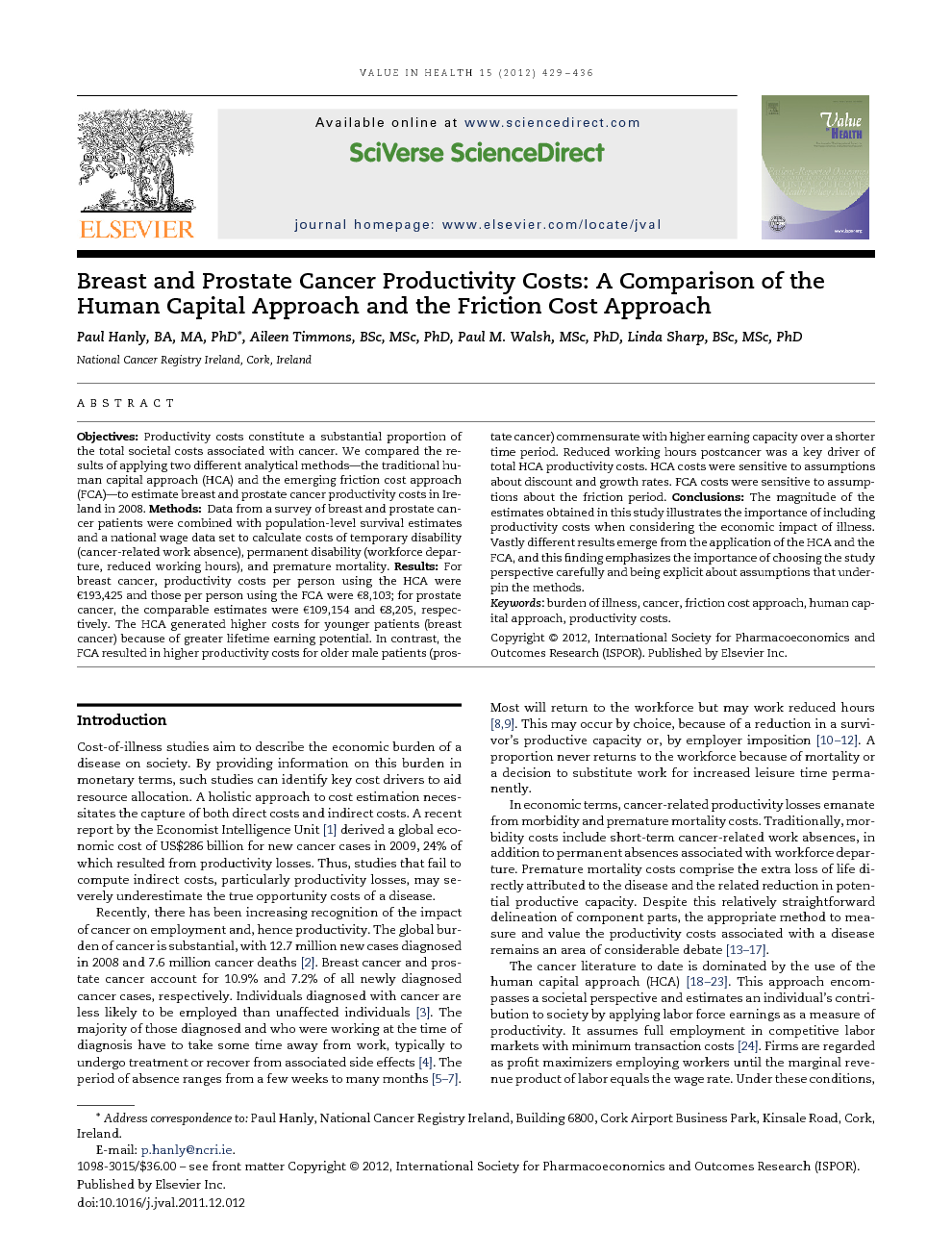 Objectives Productivity costs constitute a substantial proportion of the total societal costs associated with cancer. We compared the results of applying two different analytical methods—the traditional human capital approach (HCA) and the emerging friction cost approach (FCA)—to estimate breast and prostate cancer productivity costs in Ireland in 2008. Methods Data from a survey of breast and prostate cancer patients were combined with population-level survival estimates and a national wage data set to calculate costs of temporary disability (cancer-related work absence), permanent disability (workforce departure, reduced working hours), and premature mortality. Results For breast cancer, productivity costs per person using the HCA were €193,425 and those per person using the FCA were €8,103; for prostate cancer, the comparable estimates were €109,154 and €8,205, respectively. The HCA generated higher costs for younger patients (breast cancer) because of greater lifetime earning potential. In contrast, the FCA resulted in higher productivity costs for older male patients (prostate cancer) commensurate with higher earning capacity over a shorter time period. Reduced working hours postcancer was a key driver of total HCA productivity costs. HCA costs were sensitive to assumptions about discount and growth rates. FCA costs were sensitive to assumptions about the friction period. Conclusions The magnitude of the estimates obtained in this study illustrates the importance of including productivity costs when considering the economic impact of illness. Vastly different results emerge from the application of the HCA and the FCA, and this finding emphasizes the importance of choosing the study perspective carefully and being explicit about assumptions that underpin the methods.

Cost-of-illness studies aim to describe the economic burden of a disease on society. By providing information on this burden in monetary terms, such studies can identify key cost drivers to aid resource allocation. A holistic approach to cost estimation necessitates the capture of both direct costs and indirect costs. A recent report by the Economist Intelligence Unit [1] derived a global economic cost of US$286 billion for new cancer cases in 2009, 24% of which resulted from productivity losses. Thus, studies that fail to compute indirect costs, particularly productivity losses, may severely underestimate the true opportunity costs of a disease. Recently, there has been increasing recognition of the impact of cancer on employment and, hence productivity. The global burden of cancer is substantial, with 12.7 million new cases diagnosed in 2008 and 7.6 million cancer deaths [2]. Breast cancer and prostate cancer account for 10.9% and 7.2% of all newly diagnosed cancer cases, respectively. Individuals diagnosed with cancer are less likely to be employed than unaffected individuals [3]. The majority of those diagnosed and who were working at the time of diagnosis have to take some time away from work, typically to undergo treatment or recover from associated side effects [4]. The period of absence ranges from a few weeks to many months [5], [6] and [7]. Most will return to the workforce but may work reduced hours [8] and [9]. This may occur by choice, because of a reduction in a survivor's productive capacity or, by employer imposition [10], [11] and [12]. A proportion never returns to the workforce because of mortality or a decision to substitute work for increased leisure time permanently. In economic terms, cancer-related productivity losses emanate from morbidity and premature mortality costs. Traditionally, morbidity costs include short-term cancer-related work absences, in addition to permanent absences associated with workforce departure. Premature mortality costs comprise the extra loss of life directly attributed to the disease and the related reduction in potential productive capacity. Despite this relatively straightforward delineation of component parts, the appropriate method to measure and value the productivity costs associated with a disease remains an area of considerable debate [13], [14], [15], [16] and [17]. The cancer literature to date is dominated by the use of the human capital approach (HCA) [18], [19], [20], [21], [22] and [23]. This approach encompasses a societal perspective and estimates an individual's contribution to society by applying labor force earnings as a measure of productivity. It assumes full employment in competitive labor markets with minimum transaction costs [24]. Firms are regarded as profit maximizers employing workers until the marginal revenue product of labor equals the wage rate. Under these conditions, if a person leaves the labor market, he or she will not be replaced and so an opportunity cost exists until the age of retirement. Critics argue that the neoclassical assumptions underpinning the method are unrealistic [24]. In practice, positive unemployment levels exist and the replacement of workers occurs on an ongoing basis; thus, the approach may overestimate productivity costs. The friction cost approach (FCA), by contrast, takes an employer's perspective and attempts to measure “actual” rather than “potential” output loss, by assuming that costs relate solely to the period of time necessary to reestablish the initial production level (i.e., the friction period) and workers leaving employment are replaced by unemployed workers at an extremely low opportunity cost [25]. Critics of the FCA [15] argue that it moves away from the axioms underpinning the neoclassical theory of the firm [16]. Furthermore, it assumes that vacancies are filled by previously unemployed individuals either directly or at the end of a chain of vacancies, meaning that the calculation of costs for a single, typically short, friction period may result in underestimation [24]. The primary aim of this study was to extend the current limited evidence base by comparing the results of applying two different analytical methods—the HCA and the FCA—to quantifying the productivity costs of an illness. To illustrate this, we used the example of breast and prostate cancer in Ireland, the most common cancers in females and males, respectively. In contrast to previous productivity cost studies [19] and [26], we adopted a bottom-up approach based on a survey of breast and prostate cancer patients to facilitate detailed quantification of productivity loss subcomponents.

The HCA and the FCA adopt different perspectives and, consequently, accumulate costs over different time frames. By looking at two cancer sites, this study served to reveal further important differences between the approaches. The HCA produced a higher productivity cost for breast cancer than for prostate cancer. With the application of the FCA, the reverse was true: the cohort of older males affected by prostate cancer resulted in relatively higher productivity costs. The divergence reflected the different age profile for these cancers and gender disparities in average earnings. Moreover, a key driver of costs was PD due to reduced working hours, which remains an understudied concept in the productivity literature. Overall, this study illustrates the importance of examining indirect costs when considering the economic impact of illness, including a range of productivity cost subcomponents in such estimates, choosing the costing perspective carefully, and being explicit about assumptions that underpin the methods.