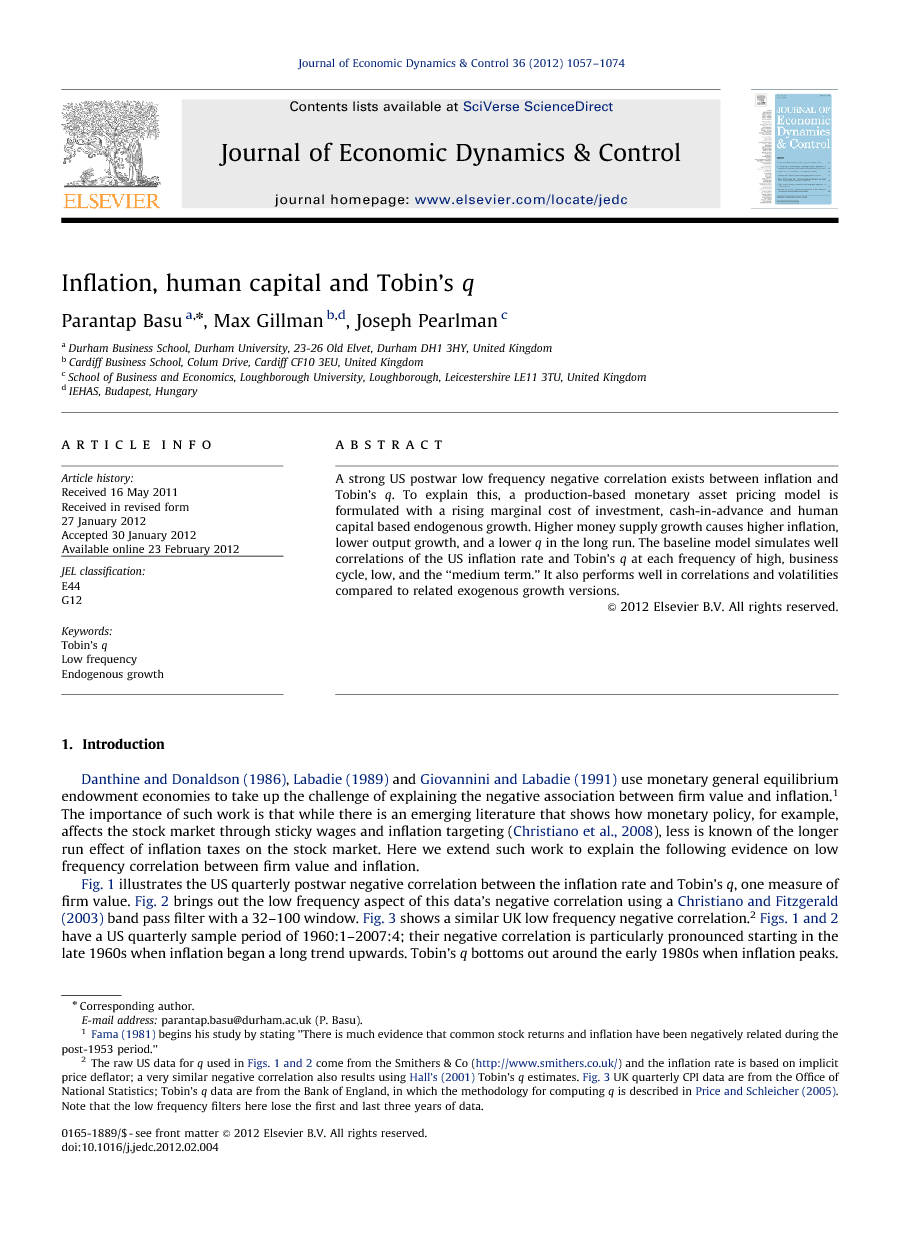 A strong US postwar low frequency negative correlation exists between inflation and Tobin's q. To explain this, a production-based monetary asset pricing model is formulated with a rising marginal cost of investment, cash-in-advance and human capital based endogenous growth. Higher money supply growth causes higher inflation, lower output growth, and a lower q in the long run. The baseline model simulates well correlations of the US inflation rate and Tobin's q at each frequency of high, business cycle, low, and the “medium term.” It also performs well in correlations and volatilities compared to related exogenous growth versions.

Danthine and Donaldson (1986), Labadie (1989) and Giovannini and Labadie (1991) use monetary general equilibrium endowment economies to take up the challenge of explaining the negative association between firm value and inflation.1 The importance of such work is that while there is an emerging literature that shows how monetary policy, for example, affects the stock market through sticky wages and inflation targeting (Christiano et al., 2008), less is known of the longer run effect of inflation taxes on the stock market. Here we extend such work to explain the following evidence on low frequency correlation between firm value and inflation. Fig. 1 illustrates the US quarterly postwar negative correlation between the inflation rate and Tobin's q, one measure of firm value. Fig. 2 brings out the low frequency aspect of this data's negative correlation using a Christiano and Fitzgerald (2003) band pass filter with a 32–100 window. Fig. 3 shows a similar UK low frequency negative correlation.2 Fig. 1 and Fig. 2 have a US quarterly sample period of 1960:1–2007:4; their negative correlation is particularly pronounced starting in the late 1960s when inflation began a long trend upwards. Tobin's q bottoms out around the early 1980s when inflation peaks. The subsequent rise of q coincides with an era of further disinflation and high economic growth. Then q reaches an all time high around 2000 shortly after inflation falls to its low around 1%. Since then q has fallen and inflation has risen. Fig. 3 has a quarterly sample period of 1989:1–2009:4. The US and UK correlation coefficients are −0.73 and −0.72 respectively which are statistically significant at the 1% level.Comin and Gertler (2006) identify low frequency oscillations for several US macroeconomic aggregates, although not Tobin's q and inflation, using a filter with a periodicity of 32–200 quarters. Given 47 years of data in our US sample, the low frequency is defined with a window of 32–100 quarters, instead of 32–200 quarters, using a Christiano–Fitzgerald (2003) band-pass filter without detrending.3Table 1 shows robustness also with respect to the filter window and the data period. A window of 32–150 gives a marginally stronger negative correlation. In the 1965Q1–2007Q4 sample, the correlation is more negative for all windows. Firm market value has long been associated with output growth,5 just as the inflation tax has been shown in theory and evidence to reduce the long term output growth rate (Gomme, 1993, Gillman and Kejak, 2005 and Gillman et al., 2004). To better explain the inflation-q correlation, this literature plus Fig. 1, Fig. 2 and Fig. 3 suggest linking the hypothesis that the inflation tax affects output growth and then firm valuation measures such as Tobin's q at low frequencies. This view requires shifting to a baseline production-based, two-sector, dynamic stochastic general equilibrium (DSGE) within an endogenous growth monetary setting. Along the balanced growth path of our economy, an increased money supply growth rate causes higher inflation, a lower output growth rate, via lower human capital utilization rate, a lower marginal cost of physical capital investment, and subsequently a lower q. Standard shocks to sectoral productivities and money supply rates generate simulated cyclic behavior that is compared to correlation and volatility evidence and to simulated performance of related models.6 The baseline results of correlations support the q and inflation rate negative link found in low frequency data. These correlations match data also using windows at a high frequency, business cycle, low frequency and a Comin and Gertler (2006) type “medium term” window that combines all these frequencies. The emphasis is on the low frequency window because of the balanced growth path linkage of inflation and q. Here also the model compares well for correlations of q with output growth and with normalized output levels, as well as for inflation with output growth and output levels. The robustness comparison is relative to two related models with exogenous growth. The baseline model has three features which give rise to a negative relation between q and inflation: (i) a Lucas and Prescott (1971) physical capital adjustment cost with a rising marginal cost of investment,7 such that along the balanced growth path (BGP) q is a function of the output growth rate (Proposition 3), (ii) human capital investment that endogenizes the balanced growth path equilibrium (BGP) growth rate (Lucas, 1988), and (iii) a cash-in-advance inflation tax economy (Lucas, 1980). In a related paper, McGrattan and Prescott (2005) argue that the rise until 2000 of the US stock price to GDP ratio is due to lower taxes on corporate distributions to shareholders. Our paper complements this approach from the monetary side through the inflation tax effects on firm value. McGrattan and Prescott focus on intangible capital; we use human capital which often is partly accounted for within intangible capital.8 Relative to Jones et al. (2005), their human capital shock here instead arises as an independent shock to productivity in a separate household sector producing human capital, as related to DeJong and Ingram (2001).9 This gives a slowly adjusting human capital that acts as an alternative approach for example to habit formation as in Boldrin et al. (2001). Closely related to our baseline model is Maffezzoli's (2000) endogenous growth two-country model with human capital, physical capital adjustment costs, and related shocks. Section 2 sets out the baseline model; Section 3 analyzes the BGP equilibrium q, and Section 4 provides the US postwar calibration. Section 5 presents impulse response analysis; Section 6 presents the main cyclical correlation and volatility results; and Section 7 summarizes the paper and suggests extensions.

The paper contributes to an explanation of the empirical low frequency negative correlation between Tobin's q and inflation. It employs a DSGE endogenous growth model that identifies plausible fundamentals. The importance of this study is that it shows long run inflation tax effects that can complement the study of shorter run effects such as in Christiano et al. (2008). To do this the paper develops a production based model which included closed-form expressions for Tobin's q that give intuition on how the money supply growth causes the linkage between inflation, q and human capital utilization along the balanced growth path. The impulse response analysis helps reveal a novel transmission mechanism of the productivity and monetary shocks through a “human capital channel”. The simulation results then provide an explanation in particular for the observed low frequency negative correlation between q and inflation. Comparison of the baseline to alternative models including exogenous growth variants highlights the success of the baseline in this respect, while showing an ability to capture more of the q and stock return volatility at all examined frequencies. This suggests how the human capital sector and its productivity shock is a key to the overall results. Extension to include elements of Christiano et al. (2008) could be introduced to try to explain better higher frequency correlations as well. Habit persistence as in Boldrin et al. (2001) could be used within the baseline model to see if additional volatility of q results. A possible extension in terms of money demand is to make the interest elasticity of money demand higher for any given rate of money supply growth so as to cause a higher and more volatile velocity and inflation, and potentially a more volatile q; this can be accomplished by extending the standard cash-only cash-in-advance constraint by allowing in addition an exchange substitute to money as in Gillman and Kejak (2010). In a different extension of the standard cash-in-advance constraint, a greater impact of the inflation on the investment rate and potentially on q might result if exchange is required for both consumption and investment purchases, rather than just consumption; Gillman and Kejak (2011) include investment in the exchange constraint in a related model to our baseline and show this allows the model not only to explain the negative effect of inflation on growth, and the Tobin (1965) effect of inflation towards a higher physical capital to human capital ratio, but also a negative effect of inflation on the investment rate as is consistent with some evidence. Another banking type extension could be the introduction of financial intermediation of savings and investment, which could allow for bank crisis effects (Gillman, 2011) through a stochastic bank productivity factor that may also cause higher q volatility. Finally the ability to explain q through the current model's shocks could be illustrated further by backing out the implied shocks of the model over time using data series, such as in the shock identification used by Nolan and Thoenissen (2010).