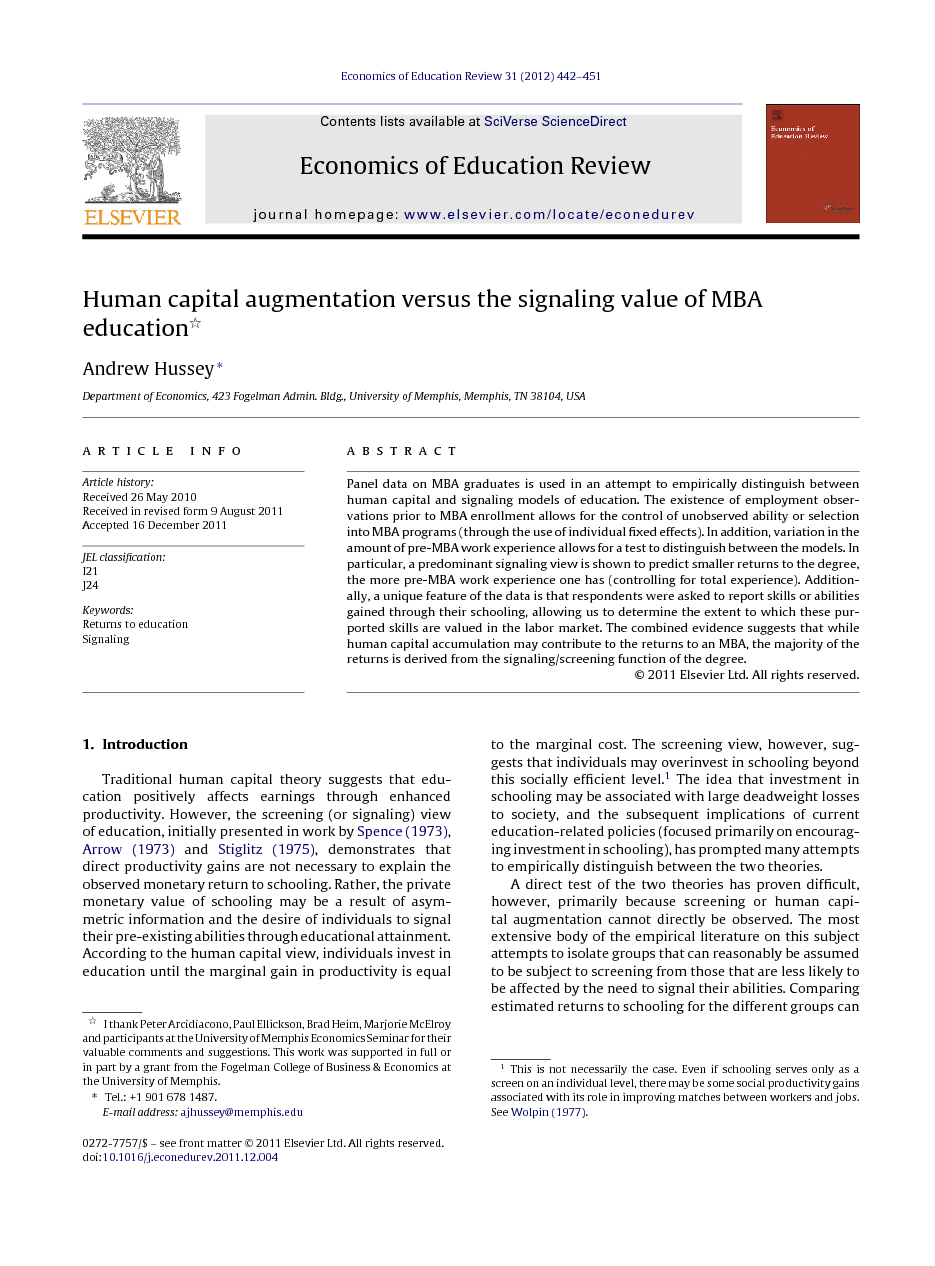 Panel data on MBA graduates is used in an attempt to empirically distinguish between human capital and signaling models of education. The existence of employment observations prior to MBA enrollment allows for the control of unobserved ability or selection into MBA programs (through the use of individual fixed effects). In addition, variation in the amount of pre-MBA work experience allows for a test to distinguish between the models. In particular, a predominant signaling view is shown to predict smaller returns to the degree, the more pre-MBA work experience one has (controlling for total experience). Additionally, a unique feature of the data is that respondents were asked to report skills or abilities gained through their schooling, allowing us to determine the extent to which these purported skills are valued in the labor market. The combined evidence suggests that while human capital accumulation may contribute to the returns to an MBA, the majority of the returns is derived from the signaling/screening function of the degree.

In this paper we have tested a prediction of screening models of education: the returns to education decreases with pre-education experience. Using data on individuals interested in obtaining an MBA, evidence was found supporting a large screening role in producing post-graduation earnings. Some caveats regarding this conclusion must be made, however. First, it is obviously the case that individuals view education more than as an investment in one's future earnings. Some people may choose to attend business school because it is enjoyable. It may be that more experienced individuals obtain an MBA as a way to facilitate switching fields by learning skills outside their current skill set. It may also be that more experienced individuals find returning to school less costly, due to already established careers, higher savings that can be used for tuition, or lessened credit constraints. In the presence of heterogeneous returns, this would entail a lower expected return necessary for the more experienced to attend. Individuals with more work experience may also have a better idea of where they will work after getting the degree (or they may be more likely to continue to work with the same employer). To compensate for more uncertainty, individuals with less work experience may require a higher expected return upon getting a job in order to decide to get the degree. While we cannot rule out this possibility, some consolation is found in the fact that the results appear to hold for both full-time and part-time degrees. Compared to part-time students, full-time students are less likely to return to the same job after graduation, regardless of the tenure of the worker at that job prior to attending. A final limitation is that we are only able to look at wages within a few years after obtaining the degree. Perhaps the screening component of an MBA may be most important for starting wages, but a larger human capital component may in fact exist, but may not be realized initially. That is, MBA attainment may alter the slope of the experience-earnings profile. Unfortunately, since the data exists for at most 6 years beyond MBA completion (and usually less than that), determining the effect of the degree on wage growth rates is difficult to identify. However, to the extent that some variation in the timing of multiple post-MBA wage observations is observed for some individuals in the sample, no significant differences in experience-earnings profiles were found. This paper has provided a further step in the attempt to empirically distinguish between the human capital and signaling models underlying the returns to education. Additional research would be beneficial and, among other reasons, the presence of a break between levels of schooling makes MBAs a prime subject for further study. In particular, a structural model of MBA attainment would allow for the more concrete determination of causal effects of the educational process, rather than relying on evidence which might be interpreted as supporting one hypothesis.