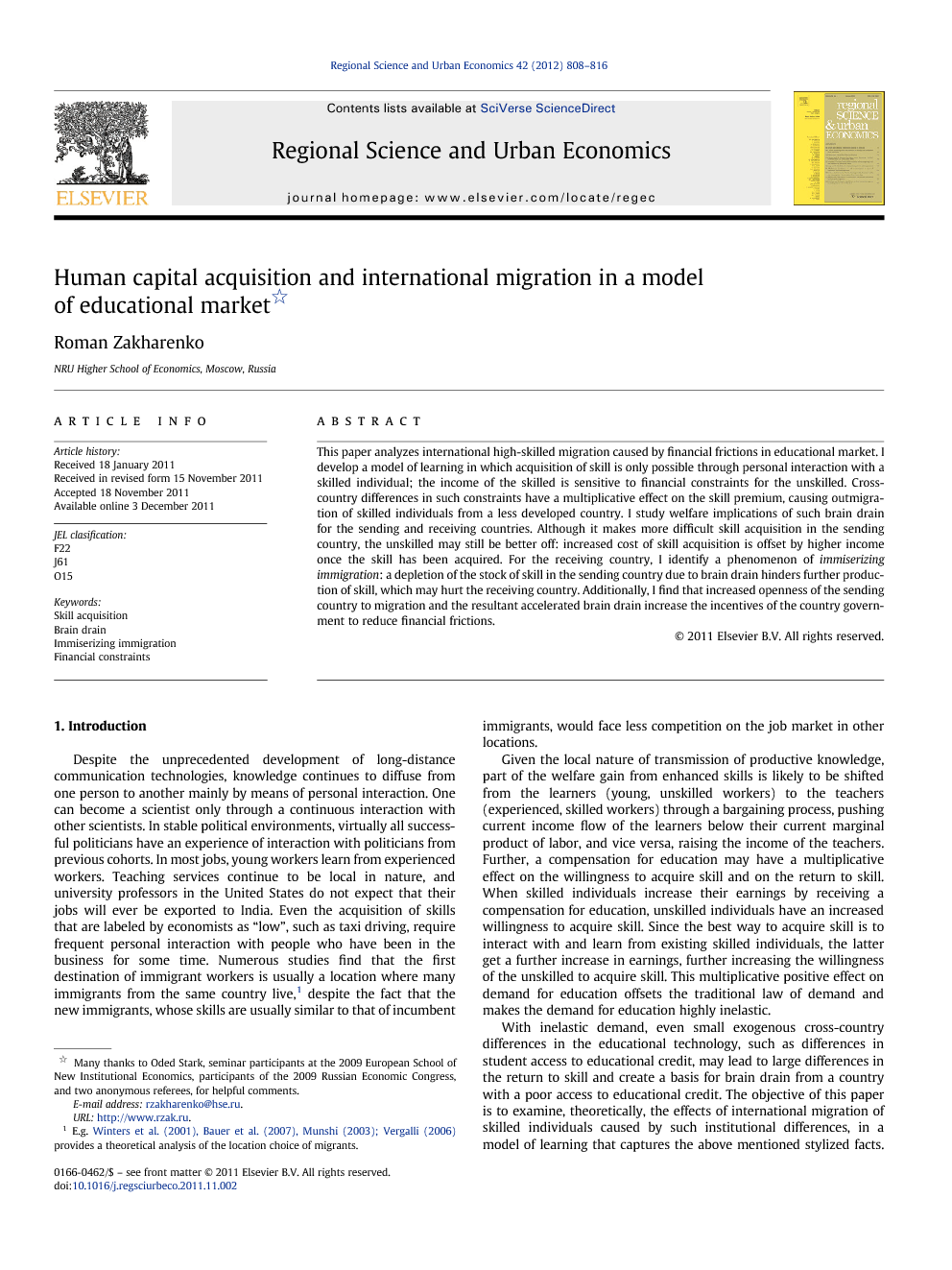 This paper analyzes international high-skilled migration caused by financial frictions in educational market. I develop a model of learning in which acquisition of skill is only possible through personal interaction with a skilled individual; the income of the skilled is sensitive to financial constraints for the unskilled. Cross-country differences in such constraints have a multiplicative effect on the skill premium, causing outmigration of skilled individuals from a less developed country. I study welfare implications of such brain drain for the sending and receiving countries. Although it makes more difficult skill acquisition in the sending country, the unskilled may still be better off: increased cost of skill acquisition is offset by higher income once the skill has been acquired. For the receiving country, I identify a phenomenon of immiserizing immigration: a depletion of the stock of skill in the sending country due to brain drain hinders further production of skill, which may hurt the receiving country. Additionally, I find that increased openness of the sending country to migration and the resultant accelerated brain drain increase the incentives of the country government to reduce financial frictions.

Modern civilization is only possible because people acquire most of their human capital from those who already possess it rather than accumulate it in isolation. While this phenomenon is well-studied at both theoretical and empirical levels, its logical extension that knowledge transfer from skilled to unskilled may be compensated by the latter, and that this compensation may positively affect the willingness to acquire skill, received little attention in the literature. In the present paper, I elaborate on this idea by developing a simple general equilibrium model of skill acquisition, in which the unskilled individuals acquire skill only by interacting with the skilled, and by compensating the latter for knowledge transfer they generate. An exogenous increase in the demand for education, for example, due to lower costs of transaction between learners and teachers, has a multiplicative effect: it leads to an increase in the return to skill, which encourages the unskilled to acquire even more skill and boosts the demand for education even further. I apply this idea to a model of international migration between countries with exogenously different ability of the unskilled to pay for their education, which leads to large differences in the return to skill and creates a basis for skilled migration from a less developed country to a more developed country. I find that an increased openness of the less developed country to such emigration may lead to an increase of welfare of the unskilled, despite the fact that they lose potential teachers, when transaction costs in the less developed country are sufficiently low. I also find that such increased openness increases economic payoffs to improvement of institutions.