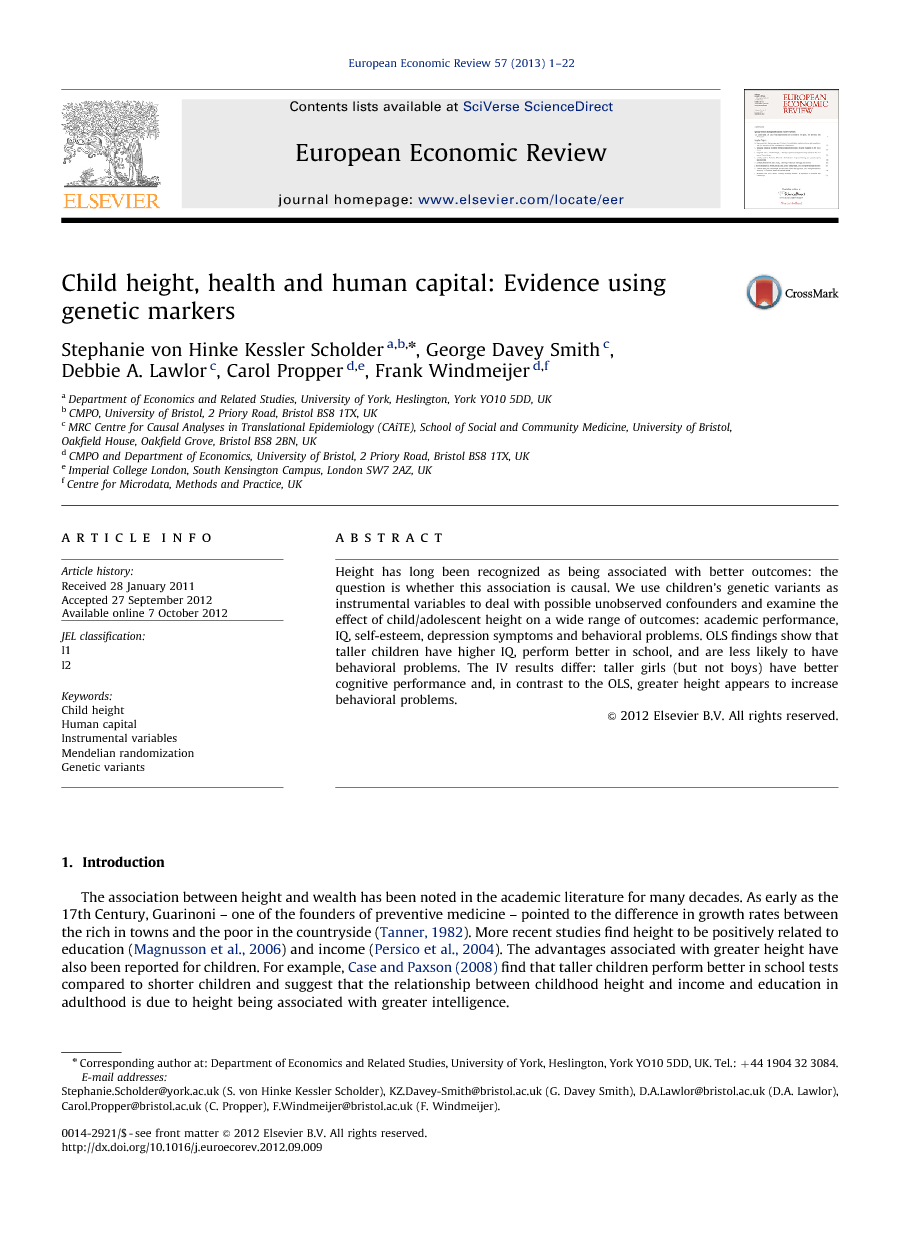 Height has long been recognized as being associated with better outcomes: the question is whether this association is causal. We use children's genetic variants as instrumental variables to deal with possible unobserved confounders and examine the effect of child/adolescent height on a wide range of outcomes: academic performance, IQ, self-esteem, depression symptoms and behavioral problems. OLS findings show that taller children have higher IQ, perform better in school, and are less likely to have behavioral problems. The IV results differ: taller girls (but not boys) have better cognitive performance and, in contrast to the OLS, greater height appears to increase behavioral problems.

This paper is the first to exploit genetic variation in height to examine the causal effects of height on human capital accumulation. OLS results show that taller children perform better in terms of cognitive performance and are less likely to have emotional and peer problems (girls), though tall girls are more likely to show symptoms of depression. Using genetic variation in height in an IV specification, we attempt to deal with the problems of endogeneity. The IV findings for girls are similar to the OLS for cognitive performance, showing a positive effect of height on KS3 and IQ. However, we do not find this for boys, where the results are indistinguishable from zero. We also find no effects of height on self-esteem and depression symptoms. In addition, we find a negative relationship of height with behavior. This suggests that the OLS results are downwardly biased and that height increases rather than decreases these behavioral problems. Taller children are more hyperactive and are more likely to have emotional problems. In addition, taller boys are more likely to have peer problems, though there is a negative relationship for girls. This suggests that height is endogenous to cognitive performance and behavior, though perhaps less so to self-esteem and depression symptoms, for which the OLS and IV estimates do not differ substantively. We are unsure why height would be endogenous to some, but not other outcomes. This may simply be due to the large standard errors, precluding us from making more precise inferences. Alternatively, it may be that unobserved factors such as pre- and postnatal nutrition affect cognitive functioning and behavior, but not self-esteem or depression. We cannot distinguish between such potential explanations. In many of our results, the IV estimates suggest that OLS is biased downwards. One possible explanation for the difference between IV and OLS could be a genetic one. For example, (one of) our SNPs could be pleiotropic or in LD with another variant that directly affects IQ or cognition. Although our tests of associations with known confounders, our falsification checks, the ‘multiple IV test’, and the scientific literature do not give any reason to expect this to be the case, we cannot rule this out. For instance, it may be that our sample is too small to detect any association between the SNPs and the covariates, and it may be that any pleiotropic effects have simply not yet been identified, or that we do not observe the relevant confounders. From the evidence discussed in Section 3.2 and from the fact that we use only nine SNPs out of possibly hundreds or thousands SNPs coding for height, we assume that our assumptions hold. However, as in any other IV study, we cannot directly test this, and it remains an assumption. A possible explanation for our IV findings that indicate that being taller increases rather than decreases behavioral problems could be the differential treatment of children of different stature. A ‘size-appropriate’ rather than ‘age-appropriate’ treatment of tall children may trigger behavioral problems. Expectations and reactions to ‘tall-for-age’ children's (what may seem childish) behavior can in turn affect children's development. As factors such as socio-economic position are positively related to height and negatively related to behavioral problems, the OLS estimates will be downward biased if these factors are insufficiently controlled for. Though possible, these are speculations as we currently have no further evidence to confirm these. However, the finding of increased behavioral problems is consistent with the psychological literature that has shown a positive relationship between height and children's behavioral problems, though this literature has mainly examined outcomes such as aggression and violence ( Raine et al., 1998 and Farrington, 1989) rather than those we examine here. Finally, the IV effects for behavior and IQ are large: a one standard deviation increase in height raises these scores by about 0.2–0.7 standard deviations. Comparing these effects with those of other child characteristics shows they are substantial. For example, a 0.4 standard deviation difference in girls’ IQ (Table 9) is comparable to the difference in this score for girls born approximately 6 months apart within the same school year. Likewise, the difference between girls’ and boys’ raw hyperactivity scores is approximately 0.37 standard deviations which is similar to the estimated effect of one standard deviation increase in height on hyperactivity for girls. In conclusion, our findings suggest that height is an important factor in children's human capital accumulation in both childhood and adolescence, most likely as a result of the social reactions that are triggered by variations in height. We show that being tall may not only confer advantage but also disadvantage. Our examination of behavioral problems contrasts with the more positive view of height that emerges from the existing empirical literature on height and children's cognitive performance.