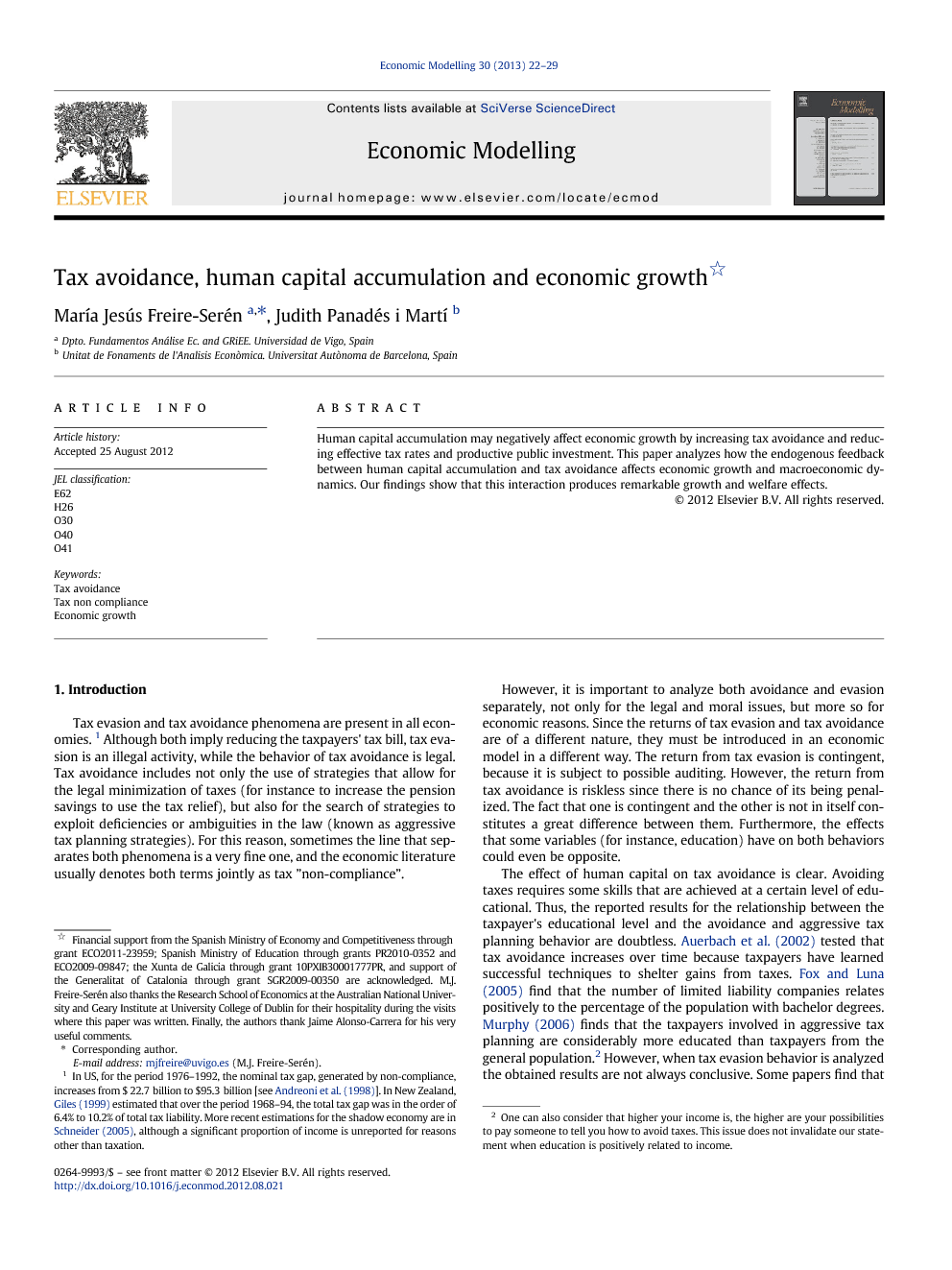 Tax evasion and tax avoidance phenomena are present in all economies. 1 Although both imply reducing the taxpayers' tax bill, tax evasion is an illegal activity, while the behavior of tax avoidance is legal. Tax avoidance includes not only the use of strategies that allow for the legal minimization of taxes (for instance to increase the pension savings to use the tax relief), but also for the search of strategies to exploit deficiencies or ambiguities in the law (known as aggressive tax planning strategies). For this reason, sometimes the line that separates both phenomena is a very fine one, and the economic literature usually denotes both terms jointly as tax ”non-compliance”. However, it is important to analyze both avoidance and evasion separately, not only for the legal and moral issues, but more so for economic reasons. Since the returns of tax evasion and tax avoidance are of a different nature, they must be introduced in an economic model in a different way. The return from tax evasion is contingent, because it is subject to possible auditing. However, the return from tax avoidance is riskless since there is no chance of its being penalized. The fact that one is contingent and the other is not in itself constitutes a great difference between them. Furthermore, the effects that some variables (for instance, education) have on both behaviors could even be opposite. The effect of human capital on tax avoidance is clear. Avoiding taxes requires some skills that are achieved at a certain level of educational. Thus, the reported results for the relationship between the taxpayer's educational level and the avoidance and aggressive tax planning behavior are doubtless. Auerbach et al. (2002) tested that tax avoidance increases over time because taxpayers have learned successful techniques to shelter gains from taxes. Fox and Luna (2005) find that the number of limited liability companies relates positively to the percentage of the population with bachelor degrees. Murphy (2006) finds that the taxpayers involved in aggressive tax planning are considerably more educated than taxpayers from the general population.2 However, when tax evasion behavior is analyzed the obtained results are not always conclusive. Some papers find that more education reduces the preference to cheat [see Kinsey and Grasmich (1993) and Hite (1997)]. However, others have found mixed results. That is, education could either increase or reduce tax evasion [see Jackson and Milliron (1986)]. Therefore, with this empirical evidence, to introduce the role of human capital in analyzing how non-compliance affects economic growth we should explicitly separate tax avoidance from tax evasion. As far as we know, no previous paper analyzes the effect of tax avoidance on economic growth. In fact, only a few papers have analyzed the role that non compliance tax plays on economic growth. The main conclusion obtained by the literature is that the relation between tax evasion and economic growth is ambiguous, and depends mainly on the degree of productivity of public goods.3 Computing the actual dimension of tax avoidance is difficult, but some papers have highlighted its relevance. Thus, Oxfam (2000) has computed that the cost of corporate tax avoidance in developing countries is around $50 billion annually. Murphy (2002) also shows that during the 1990s, an estimated $4 billion in tax revenue was lost as a result of 42,000 Australians becoming involved in aggressive mass market tax schemes. Moreover, Braithwaite (2003) relates that a multitude of strategies that seek to exploit deficiencies in the law are continuously being devised each year. Therefore, tax avoidance is an important issue that deserves to be considered. This paper analyzes how tax avoidance affects economic growth, by introducing the role of human capital accumulation. It is well known that human capital accumulation is an important source of economic growth because it increases the efficiency units of labor. However, there is also other mechanism through which human capital may reduce economic growth. Our hypothesis is that the causality between tax avoidance and human capital accumulation goes in both directions. Tax avoidance significantly reduces government revenues and therefore affects the level of public expenditure. In an economy where human capital accumulation depends on public expenditure, it is also clear that tax avoidance affects the stock of human capital. The aim of this paper is to analyze how the endogenous feedback between human capital accumulation and tax avoidance affects economic growth and macroeconomic dynamics. To do this, we introduce endogenous tax avoidance in an endogenous economic growth model with human and public capital accumulation. The analysis will show that the interaction between human capital accumulation and tax avoidance may produce remarkable growth and welfare effects. Moreover, it will show how these two effects have in general opposite sign. Avoidance can either increase or reduce economic growth depending on both the value of the legal tax rate and the intensity of the tax avoidance. The paper is organized as follows. Section 2 presents the economic model. Section 3 defines the balanced growth equilibrium of the economy. Section 4 numerically characterizes how human capital accumulation, fiscal policy and avoidance affect growth and welfare. Finally, Section 5 summarizes and discusses the main findings of the analysis, and prospects future research.

This paper has shown that the interaction between human capital accumulation and tax avoidance may have remarkable growth and welfare effects. In our model, individuals can change their ability to avoid taxes by investing in human capital. Moreover, changes on avoidance intensity alter the human capital accumulation process. Taking this feedback into account, we have found that tax avoidance can either increase or reduce economic growth depending on the value of the nominal tax rate and on the avoidance intensity, i.e., the productivity of human capital in avoiding taxes. For instance, in economies with low nominal tax rates, human capital accumulation could affect economic growth negatively if the taxpayers avoid taxes. We have also found that growth-maximizing tax rates crucially depend on the intensity of avoidance. Concerning welfare analysis, we have found that the impact of avoidance on the welfare produced by changes in the nominal tax rate is quite large. However the impact of the avoidance on the welfare produced by imbalances in human and public capital is small. The analysis of the paper can extend in several directions. First, we can perform an optimal taxation analysis. In this type of endogenous growth model, private investment is socially suboptimal because it is a source of productive externalities. The private decision on consumption and investment determines the tax base and thus the stock of public capital and the marginal productivity of human capital. In the present model, the productive externalities also operate through avoidance technology. A second extension could be to study the effects of avoidance on income inequality. Avoidance may be an important mechanism for inequality dynamics because it affects tax progressivity. Furthermore, the rate of avoidance differs across the different types of incomes. These two issues will define our future research agenda.