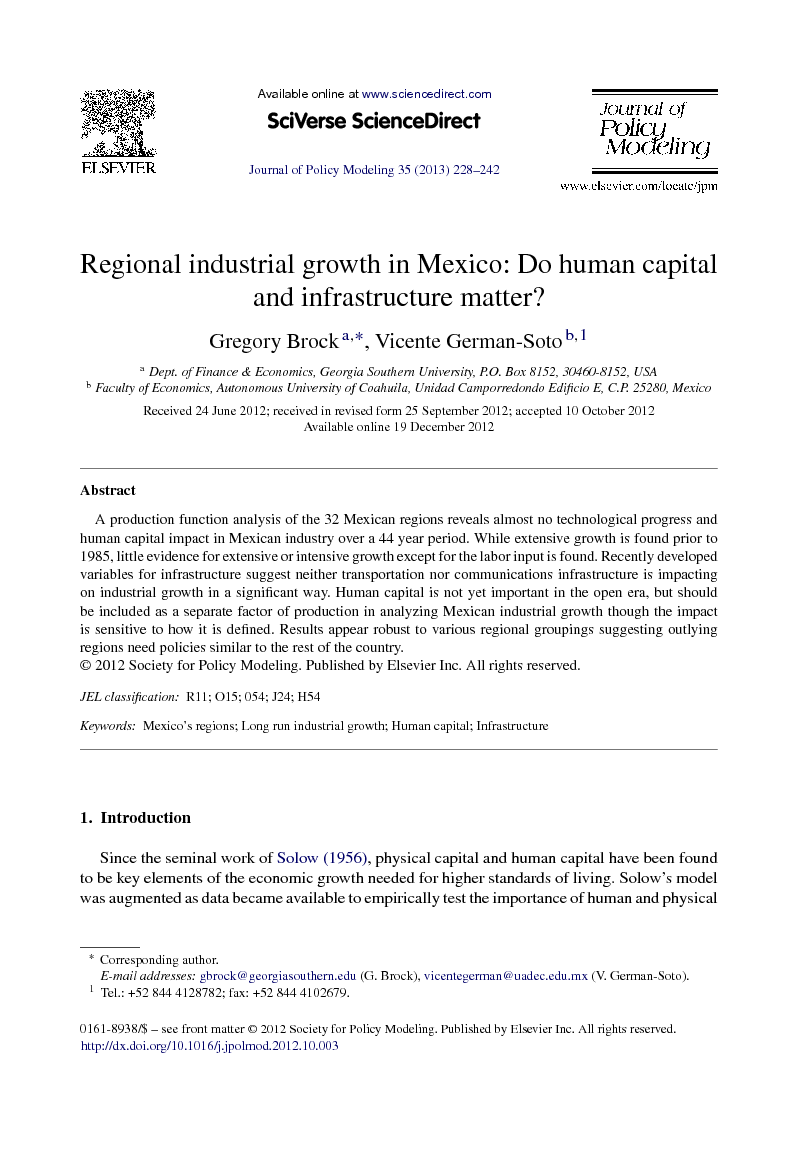 A production function analysis of the 32 Mexican regions reveals almost no technological progress and human capital impact in Mexican industry over a 44 year period. While extensive growth is found prior to 1985, little evidence for extensive or intensive growth except for the labor input is found. Recently developed variables for infrastructure suggest neither transportation nor communications infrastructure is impacting on industrial growth in a significant way. Human capital is not yet important in the open era, but should be included as a separate factor of production in analyzing Mexican industrial growth though the impact is sensitive to how it is defined. Results appear robust to various regional groupings suggesting outlying regions need policies similar to the rest of the country.

Since the seminal work of Solow (1956), physical capital and human capital have been found to be key elements of the economic growth needed for higher standards of living. Solow's model was augmented as data became available to empirically test the importance of human and physical capital relative to labor. In the 1980s and 1990s a large volume of work offered empirical evidence supporting Solow's model with an interesting extension by Mankiw, Romer, and Weil (1992) with international data. Other seminal works by Romer, 1986 and Romer, 1990, Lucas (1988), and Rebelo (1991) questioned the theoretical position of exogenous factors in Solow's model and provided a different perspective where technology, knowledge and innovation are the main factors of economic growth. This work is known as the endogenous growth literature and is characterized by its emphasis on human capital and the creation of knowledge. Concurrently, Solow's model was used to analyze growth across countries, international regions, and regions within a single country. Using different variants of the original model with a wide range of time periods, subnational regional research has been hampered by the availability of time series data with early studies using only cross-sectional regressions. The majority of studies estimate the elasticity between income (or output) per capita and physical and human capital, while other papers enter the debate on temporal convergence (e.g. Salinas-Jiminez, Immaculada Alverez-Ayuso, & Jesus, 2006). In studies of Mexico in particular, data availability has influenced the empirical analysis of regional economic growth as there are large geographical and income disparities. Early contributions in this area were based on five-year intervals with few observations over time (e.g. Juan-Ramón and Rivera-Bátiz, 1996 and Mallick and Carayannis, 1994). Regional differences motivated a lot of work on convergence (e.g. Esquivel, 1999) and trade liberalization reforms. The latest econometric tools have begun to be used (e.g. Aroca, Bosch, & Maloney, 2005 – spatial econometric techniques; Carrion-i-Silvestre and German-Soto, 2007 and Carrion-i-Silvestre and German-Soto, 2010, – time series methods). Our study takes advantage of recently created long-run annual industrial sector time series data to analyze the sector's performance across Mexican states. More specifically, we apply a Cobb–Douglas production function over the long 1960–2003 period. We examine the impact of regional diversity by excluding potential outliers such as Mexico City and the Northern Tier plus consider the closed (pre-1986) versus open (post-1985) eras. The results explain much of the regional Mexican performance of the last forty years and adds to short term analysis by others. For instance, we find that human capital and infrastructure were relevant for the closed era but they are less important after the economy opened. We find that technological progress, although low, is no longer declining as it was in the closed era. The results also are sensitive to different outliers and samples suggesting that heterogeneity and a shift of the underlying model have to be taken into account over the long run. The study is organized as follows. Section 2 summarizes the literature concerning regional growth in Mexico. Section 3 describes methodology and the econometric specification. In Section 4 the data are explained, while Section 5 discusses the results. Section 6 discusses some industrial policy implications. Section 7 concludes.

Using industrial growth equations that explicitly account for human capital and infrastructure, Mexican industrial growth is shown to slow down after the economy opened to the world economy. Technological progress or intensive growth appears to be quite low but is no longer declining as it was in the closed era. Transportation and communications infrastructure must be modernized so they can have the positive impact on industrial growth and FDI found in other countries as well as Mexico. The results with many of the different models serving as sensitivity tests on a base Model two suggest Mexico's industrial growth has been extensive (input augmenting) in the past, but was slowed by an opening up of the economy. While the labor input remains important, Mexican physical capital especially outside the Mexico City area does not support modern industrial growth. While NAFTA has helped shift industry to the Northern Tier, growing North/South disparities can offset any benefits of this recent change. Mexico is not following the human capital augmented production function experience of each of the three core inputs having positive impacts on industrial growth that is found for other countries. Studies using a schooling approach to human capital may be overestimating the impact of school years on economic growth and/or that the schooling received is not the kind needed to grow the economy in the modern era with the mixed results of an education based human capital index found in the literature on Mexico supported here. Human capital measurement must go beyond years of schooling, government expenditures on education and/or the total number of scientists often found in growth studies to capture what is happening in Mexico. Though foreign investment such as an American company purchasing the railway network and Spanish ownership of banks has had mixed results (Dussel Peters, 2009), Mexico will need much more foreign investment if industrial growth rates are to return to the high level of the closed era. Unfortunately, as in the U.S. regional case, FDI for every year and region back to 1960 are not available leaving the discussion of regional FDI to either descriptive economic history or a shorter time period of analysis.