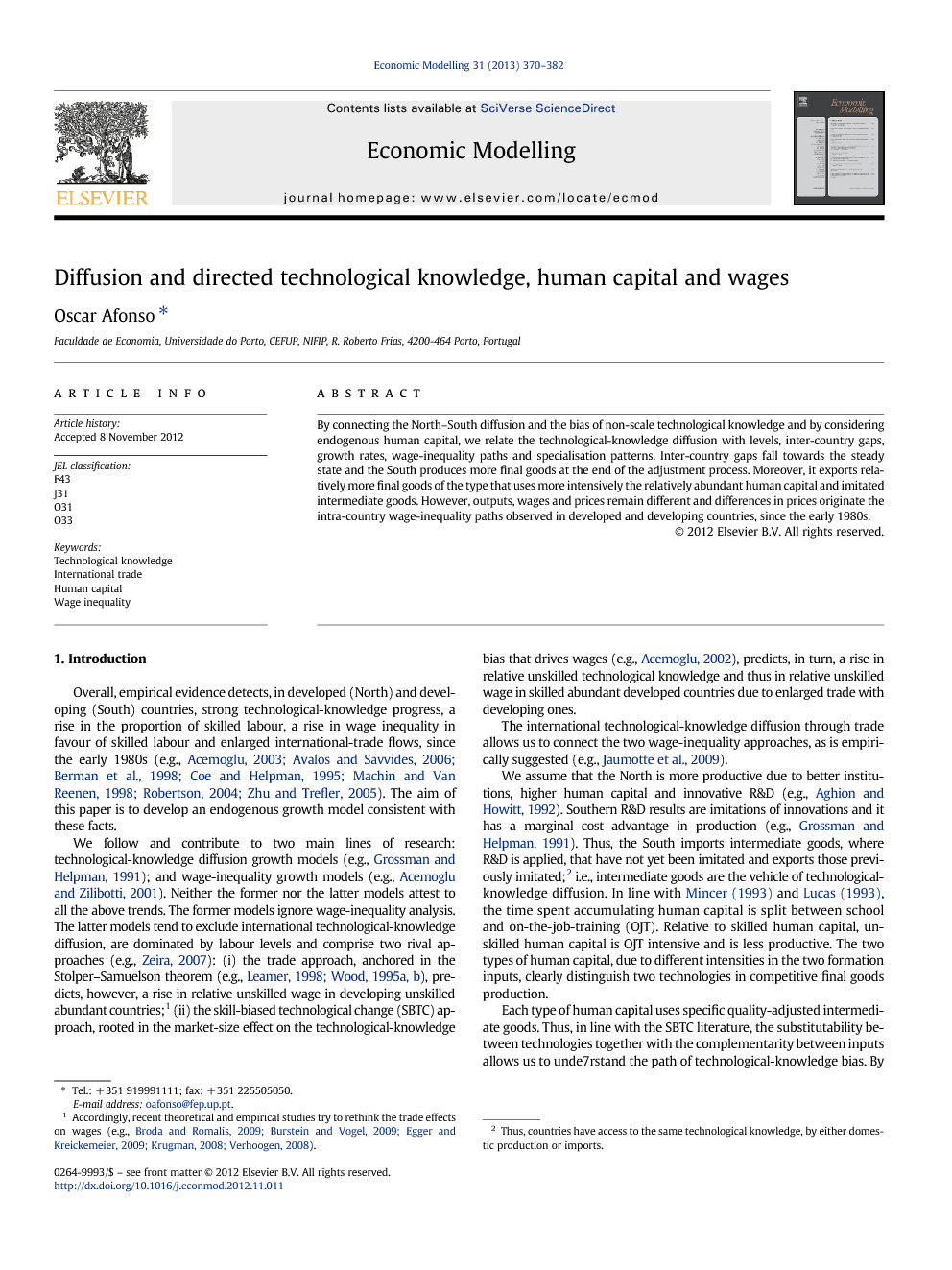 By connecting the North–South diffusion and the bias of non-scale technological knowledge and by considering endogenous human capital, we relate the technological-knowledge diffusion with levels, inter-country gaps, growth rates, wage-inequality paths and specialisation patterns. Inter-country gaps fall towards the steady state and the South produces more final goods at the end of the adjustment process. Moreover, it exports relatively more final goods of the type that uses more intensively the relatively abundant human capital and imitated intermediate goods. However, outputs, wages and prices remain different and differences in prices originate the intra-country wage-inequality paths observed in developed and developing countries, since the early 1980s.

By considering trade between the North innovator and the South imitator, this paper connects the diffusion with the bias of technological-knowledge, and thus relates the diffusion under trade with levels, growth rates, specialisation patterns and wage-inequality paths. This connection is analysed in a model where: (i) mechanisms work through the price of final-goods channel; (ii) technological-knowledge progress and human-capital accumulation drive endogenous growth, and their direction, affected by trade, governs wages and specialisation. The dynamic comparative advantage is thus induced by dynamic versions of both the Ricardian and the Hechscher–Ohlian models. A process of convergence between countries exists, since technological-knowledge and employed human-capital gaps narrow — i.e., during the transitional dynamics the South grows at a higher rate than the North, but the differential falls steadily. In spite of the greater interdependence between countries induced by trade, differences in human-capital levels imply that the convergence in prices is only relative: the Southern relative price of skilled final goods remains higher. Thus, the North–South average relative price of skilled final goods is higher than in the pre-trade North, which increases the relative demand for new skilled designs. In turn, this boosts the relative worldwide supply of skilled intermediate goods. Therefore, the interdependence between countries and the price channel induce more R&D directed at improving skilled technological knowledge than in the pre-trade North, which originates more moderate paths for technological-knowledge bias and intra-country wage inequality. In particular, the level effect on the South is reverted and the path of wage inequality is more moderate than in the pre-trade North. Hence, wage-inequality results can be interpreted relative to skill-biased technological change literature. In that literature, the bias that causes intra-country wage inequality is mainly induced through the market-size channel. In our case, changes in intra and inter-country wage inequality also arise from the technological-knowledge bias, which is governed by the price channel under trade and which spreads from the North to the South. In contrast with the market-size channel, the price-channel process is compatible with the observed wage-inequality path in favour of skilled labour in developed and developing countries. Due to level and growth effects, trade strongly benefits the South. However, due to the gaps in exogenous productivity and in human capital, the steady state levels of output and wages remain different between countries. Indeed, although the level effect strongly favours Southern wages, South–north wage differences remain: in steady state there is maintenance of inter-country wage inequality — i.e., they grow at the same rate — which implies that a dynamic Schumpeterian factor-price equalisation or Samuelson result arises. With regards to the specialisation patterns, we find that: (i) at each time, both countries produce, consume and export both types of final goods, since they always have both types of human-capital; (ii) each country exports relatively more final goods of the type that use the relatively abundant type of human capital more intensively, directly in line with the Hechscher–Ohlian model; (iii) the South (North) produces, consumes and exports imitated (not yet imitated) intermediate goods, directly in line with the Ricardian model; (iv) the South produces more final goods at the end of the adjustment process, since it has become more developed (the technological knowledge and human capital gaps decrease). It is also worth recording the fact that numerical simulations show that the model's qualitative behaviour is similar if the value of each parameter or initial condition at a time is changed relative to its baseline value, where slight differences are attained in the value of the variables in the new steady state. This attests to the stability of the model.