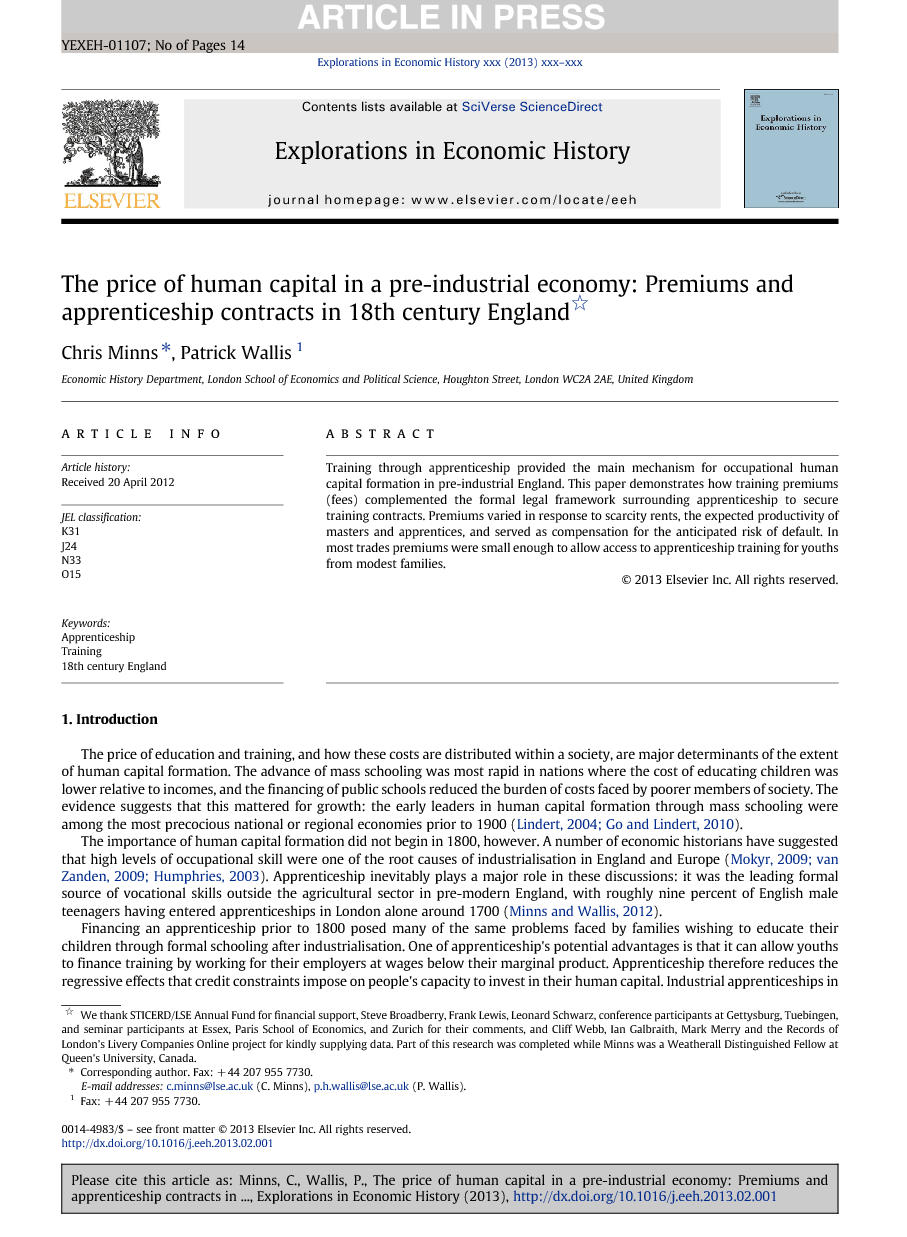 Training through apprenticeship provided the main mechanism for occupational human capital formation in pre-industrial England. This paper demonstrates how training premiums (fees) complemented the formal legal framework surrounding apprenticeship to secure training contracts. Premiums varied in response to scarcity rents, the expected productivity of masters and apprentices, and served as compensation for the anticipated risk of default. In most trades premiums were small enough to allow access to apprenticeship training for youths from modest families.

The price of education and training, and how these costs are distributed within a society, are major determinants of the extent of human capital formation. The advance of mass schooling was most rapid in nations where the cost of educating children was lower relative to incomes, and the financing of public schools reduced the burden of costs faced by poorer members of society. The evidence suggests that this mattered for growth: the early leaders in human capital formation through mass schooling were among the most precocious national or regional economies prior to 1900 (Lindert, 2004 and Go and Lindert, 2010). The importance of human capital formation did not begin in 1800, however. A number of economic historians have suggested that high levels of occupational skill were one of the root causes of industrialisation in England and Europe (Mokyr, 2009, van Zanden, 2009 and Humphries, 2003). Apprenticeship inevitably plays a major role in these discussions: it was the leading formal source of vocational skills outside the agricultural sector in pre-modern England, with roughly nine percent of English male teenagers having entered apprenticeships in London alone around 1700 (Minns and Wallis, 2012). Financing an apprenticeship prior to 1800 posed many of the same problems faced by families wishing to educate their children through formal schooling after industrialisation. One of apprenticeship's potential advantages is that it can allow youths to finance training by working for their employers at wages below their marginal product. Apprenticeship therefore reduces the regressive effects that credit constraints impose on people's capacity to invest in their human capital. Industrial apprenticeships in the nineteenth and twentieth centuries often operated on these terms (More, 1980 and Smits and Stromback, 2000). In the seventeenth and eighteenth centuries, indentured servitude utilised a similar system: English youths obtained passages across the Atlantic by committing themselves to work for an employer for a period thereafter (Galenson, 1981). It is striking, therefore, that English apprentices in the eighteenth century were often required to make an up-front payment, known as the premium, to their master in order to obtain a position. The existence of premiums is well known to historians, who have often suggested that they were large and ubiquitous. As a result, premiums have been interpreted as lowering the extent of economic mobility through apprenticeship. If this was the case, it offers a potentially powerful counter-argument against suggestions that the relative openness of apprenticeship, and by extension of guilds and skilled occupations, was one of the distinguishing features of the European economy (Epstein, 1998). Large, uniform premiums would reinforce more pessimistic accounts of apprenticeship as a socially exclusive device that preserved rents for insiders (Ogilvie, 2004). Premium size is thus an important variable for wider economic performance — if it presented a significant barrier to training, this would have implications for productivity, economic mobility and the extent to which aptitude and opportunity were matched (Ben-Amos, 1994, Brooks, 1994 and De Munck, 2007. See also: Ogilvie, 1997 and Ogilvie, 2004). Premiums also have significant implications for a second element in ongoing debates about apprenticeship: whether masters and apprentices were able to write viable, self-enforcing contracts. Several studies have argued that apprenticeship contracts in Paris, Montreal and Antwerp were tightly specified in order to reduce opportunism (Hamilton, 1996, Kaplan, 1993 and De Munck, 2007). No parallel study exists for English apprenticeship, however, and recent work has focused on external enforcement mechanisms (Humphries, 2003, Minns and Wallis, 2012, Minns and Wallis, 2011 and Wallis, 2012). Indeed, despite the significant role attributed to apprenticeship in pre-industrial economic development, there is relatively little systematic evidence about the incidence and level of premiums that English apprentices actually paid, and no detailed analysis of what factors determined the level of premiums in this period. In this paper we explore the price of apprenticeship training in England in the eighteenth century, the effect of fees on access to training, and the role of fees in permitting contracts to be agreed in an environment with limited institutional flexibility. Using a large sample of premium records from the eighteenth century, we show that the financial barrier presented by premiums has been overstated, varied widely between occupations and individuals, and was in many cases dwarfed by the cost of starting a business following a successful apprenticeship. We find that premiums fit well with a standard human capital model, expanded to incorporate the risk of early departure. They reflected variations in the anticipated costs and benefits of individual training contracts, including apprentices' expected productivity, and the likely availability of economic rents following training. However, we also suggest that one of the main purposes of premiums appears to have been to solve the problem of potential holdups in the training market due to the high risk of default. Premiums allowed masters to accept apprentices readily and invest in training their apprentices despite high rates of attrition.

Apprenticeship was the main source of non-agricultural training in pre-industrial England. The scale and continuity of the practice suggest that it was a success, despite small firm size, limited information flows about prospective training partners, and low completion rates. Masters and apprentices were heterogeneous, but England's rigid labour laws gave them little room to acknowledge this through their contracts. Our analysis shows that training premiums were used to address the core tensions in securing pre-industrial training contracts. Premiums compensated apprentices and masters for the anticipated risks of default and limited information about training quality, supplying a crucial degree of freedom that allowed masters and apprentices to reach long-term indenture agreements. Premiums also reflected occupational returns and residual corporate privileges. England's reliance on premiums to create contracts increased the price of entrance into apprenticeship. This had consequences for access to training among the credit constrained, but premiums were typically small relative to opportunity costs and the capital required for a business. Apprenticeship premiums were not ubiquitous, and even in occupations where they were charged frequently they were modest relative to expected incomes. Premiums do not represent the only potential solution to the hold-up problem in a pre-industrial training market. For example, labour laws could have been altered to allow shorter, more flexible terms of indenture, as in other markets for bound labour in the period. However, proposals to change labour law faced strong opposition (Rule, 1981 and Berlin, 2008), and neither the state, which taxed premiums, nor masters who received them had strong incentives to change the system. Understanding how training was secured has implications for the ongoing debate regarding the role of formal institutions in generating economic growth. England's precocity in human capital formation has been identified as a key engine of early economic growth, but the restrictive framework surrounding apprenticeship indentures in pre-industrial England gave masters and apprentices few degrees of freedom with which to form mutually agreeable contracts. Evidence of high rates of attrition suggests that some aspects of these contracts were in any case unenforceable, and instead of enforcement, English legal institutions offered relatively easy dissolution of contracts (Wallis, 2012). In these circumstances, premiums were a private-order arrangement that allowed training contracts to be adjusted to individual circumstances, despite high levels of uncertainty, limited information flows, and the rigidities created by English labour law. While many economic historians have argued that English pre-industrial institutions were one of the foundations upon which modern economic growth was built, it is striking that a private-order, informal mechanism was a necessary complement to formal rules in this crucial area of human capital formation.