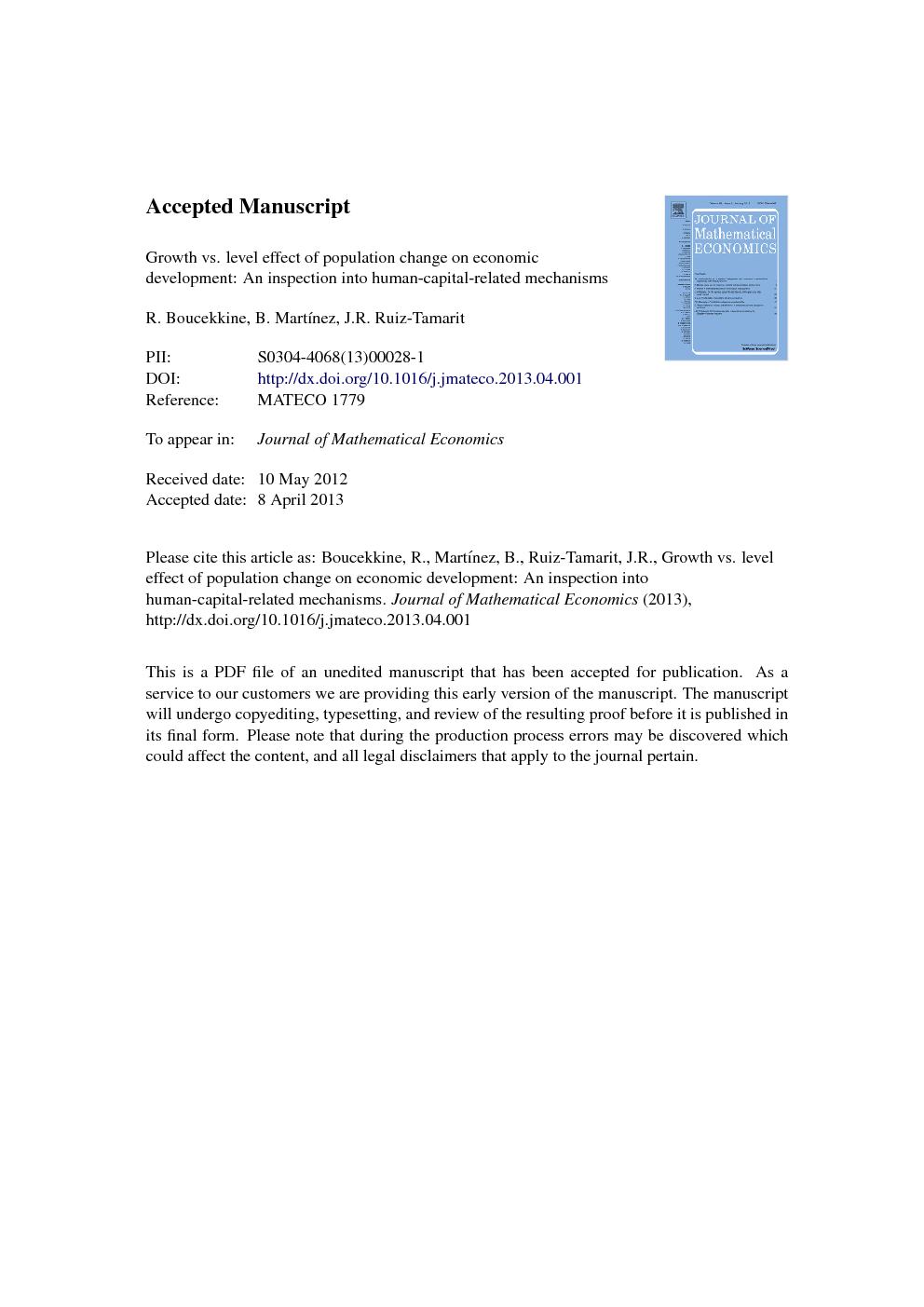 This paper studies the different mechanisms and the dynamics through which demography is channelled to the economy. We analyze the role of demographic changes in the economic development process by studying the transitional and the long-run impact of both the rate of population growth and the initial population size on the levels of per capita human capital and income. We do that in an enlarged Lucas–Uzawa model with intergenerational altruism. In contrast to the existing theoretical literature, the long-run level effects of demographic changes, i.e. their impact on the levels of the variables along the balanced growth path, are deeply characterized in addition to the more standard long-run growth effects. We prove that the level effect of the population rate of growth is non-negative (positive in the empirically most relevant case) for the average level of human capital, but a priori ambiguous for the level of per capita income due to the interaction of three transmission mechanisms of demographic shocks, a standard one (dilution) and two non-standard (altruism and human capital accumulation). Overall, the sign of the level effects of population growth depend on preference and technology parameters, but numerically we show that the joint negative effect of dilution and altruism is always stronger than the induced positive human capital effect. The growth effect of population growth depends basically on the attitude to intergenerational altruism and intertemporal substitution. Moreover, we also prove that the long-run level effects of population size on per capita human capital and income may be negative, nil, or positive, depending on the relationship between preferences and technology, while its growth effect is zero. Finally, we show that the model is able to replicate complicated time relationships between economic and demographic changes. In particular, it entails a negative effect of population growth on per capita income, which dominates in the initial periods, and a positive effect which restores a positive correlation between population growth and economic performance in the long term.

In this paper we have analytically studied the short- and long-run impact of two demographic variables (population size and the rate of growth of population) on two kind of economic variables (the rate of growth of the economy and the level of the essential economic indicators) in a growth model based on the accumulation of human capital. In comparison with the related existing literature, three breakthroughs have been achieved: a separate analysis of the level effects of demographic change, an inspection into the level and growth effects of population size in the context of a growing economy driven by human capital accumulation, and the study of the possible “complicated time relationships” between economic development and demographic change through the analysis of transitional dynamics. It goes without saying that many research lines are still open. One is the inclusion of feedback effects from economic growth to population change, which ultimately requires endogenizing demographics. There are several ways to undertake such a task (see for example Boucekkine and Fabbri (2013) for a quite general one-sector model). However, it is very likely that such a step will destroy the closed-form solutions developed in this paper. Without the latter, the exercise will turn fully computational, disabling any analytical decomposition of the mechanisms at work. A second more valuable line of research is empirical and concerns the development of tools in order to identify level vs. growth effects in the data. Our paper shows that such a distinction is highly relevant.