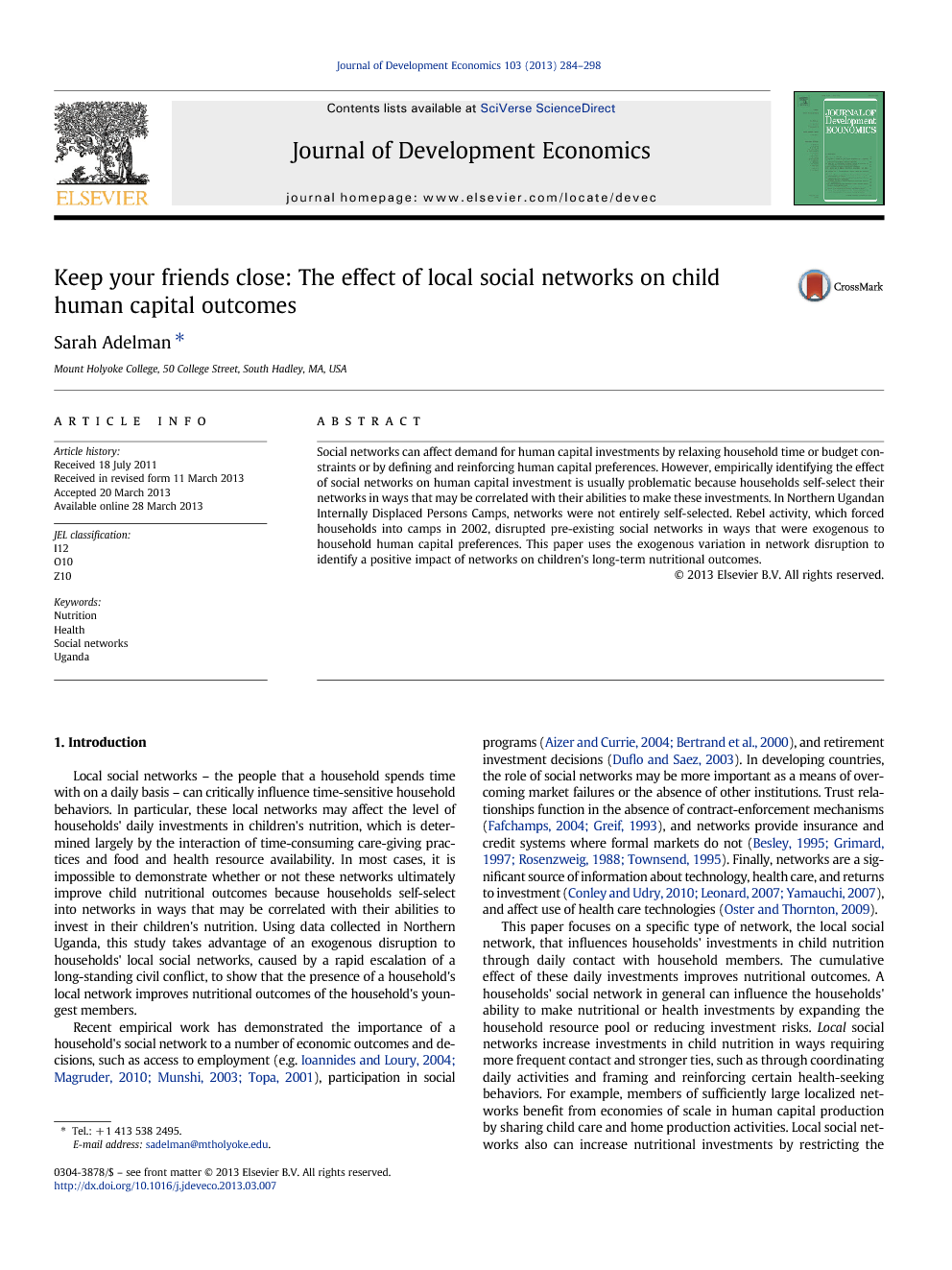 Social networks can affect demand for human capital investments by relaxing household time or budget constraints or by defining and reinforcing human capital preferences. However, empirically identifying the effect of social networks on human capital investment is usually problematic because households self-select their networks in ways that may be correlated with their abilities to make these investments. In Northern Ugandan Internally Displaced Persons Camps, networks were not entirely self-selected. Rebel activity, which forced households into camps in 2002, disrupted pre-existing social networks in ways that were exogenous to household human capital preferences. This paper uses the exogenous variation in network disruption to identify a positive impact of networks on children's long-term nutritional outcomes.

This study shows that small changes in households' network size yield substantial improvements in HAZ for preschool-age children, demonstrating the role of networks in increasing health and nutrition investments. In particular, I find that maintaining an additional pre-displacement network member as part of the in-camp network leads to a .20 HAZ improvement. As the average in-camp local network size was under 4 households, a marginal increase in network size is equivalent to increasing the average network by approximately 25%. In most settings, identifying network effects is impossible because households self-define and self-select networks in ways that may not be observable. For this study, data collected in IDP camps allowed me to identify the members of households' self-defined and self-selected networks and then to isolate an element of exogenous variation in network size across households. I measure the in-camp social network as the number of households that were part of a respondent's farmers' group before displacement, a group identified as influencing human capital investment in the village, who remained part of the respondent's local network in the camp. However, since households may be able to affect their in-camp network size by restoring network links in the camp, even the in-camp network size may have an endogenous component. Thus I use the ways in which a civil conflict fragmented villages in camps to explain exogenous variations in households' resulting in-camp network sizes. Since village fragmentation explains part of in-camp network size and was exogenous to household preferences for network size and households' ability to invest in child health, measures of village fragmentation can be used as instruments for in-camp network size, allowing me to identify a causal network effect. This study considers a particular type of network, the local social network, that has two important attributes: daily contact and long-standing ties. Farmers' group members who did not live in the same block of the camp as the respondent did not have the same effect on child health outcomes as those who lived nearby and had daily contact. Additionally, in-camp neighbors who did not have long ties with the respondent did not appear to influence households' behaviors in the same way that farmers' group members did. The daily contact with close ties affects child nutritional outcomes by impacting daily nutritional investments in these children. While the ability to detect network effects on child outcomes relied on the camp context, the mechanisms through which networks can impact child outcomes can apply widely. First, the possibility of networks increasing access to information or financial resources or reducing household constraints has been demonstrated in the context of informal insurance and access to employment, which involve periodic network influences. The findings in this paper suggest that networks may also improve access to resources for daily investments, as children's linear growth requires daily nutritional inputs. The explanation that networks restrict choices has been used to explain the persistence of racial inequality (e.g. Loury, 2002), in which individuals may make choices that appear economically detrimental in order to maintain group identity. The evidence presented above shows that network restrictions on choice may lead households to make better choices where their children are concerned. Investments in early childhood nutrition lead to increased educational attainment, improved cognitive functioning, better adult health outcomes and higher productivity and wages. Additionally, the effects of inadequate early childhood nutrition, which include poor adult health outcomes, reduced educational attainment, impaired cognitive functioning, and lower productivity and wages, are largely irreversible (e.g. Martorell et al., 1994). In developing countries, where food resources are scarce, social networks can play a critical role in ensuring that resources are directed to young children during critical windows so that households can realize these future benefits. In Northern Ugandan IDP camps, the stakes are particularly high as the opportunities for human capital development are limited for all age groups. The effects of households' networks on early childhood nutritional outcomes could be critical to lasting economic recovery as households rebuild their lives.