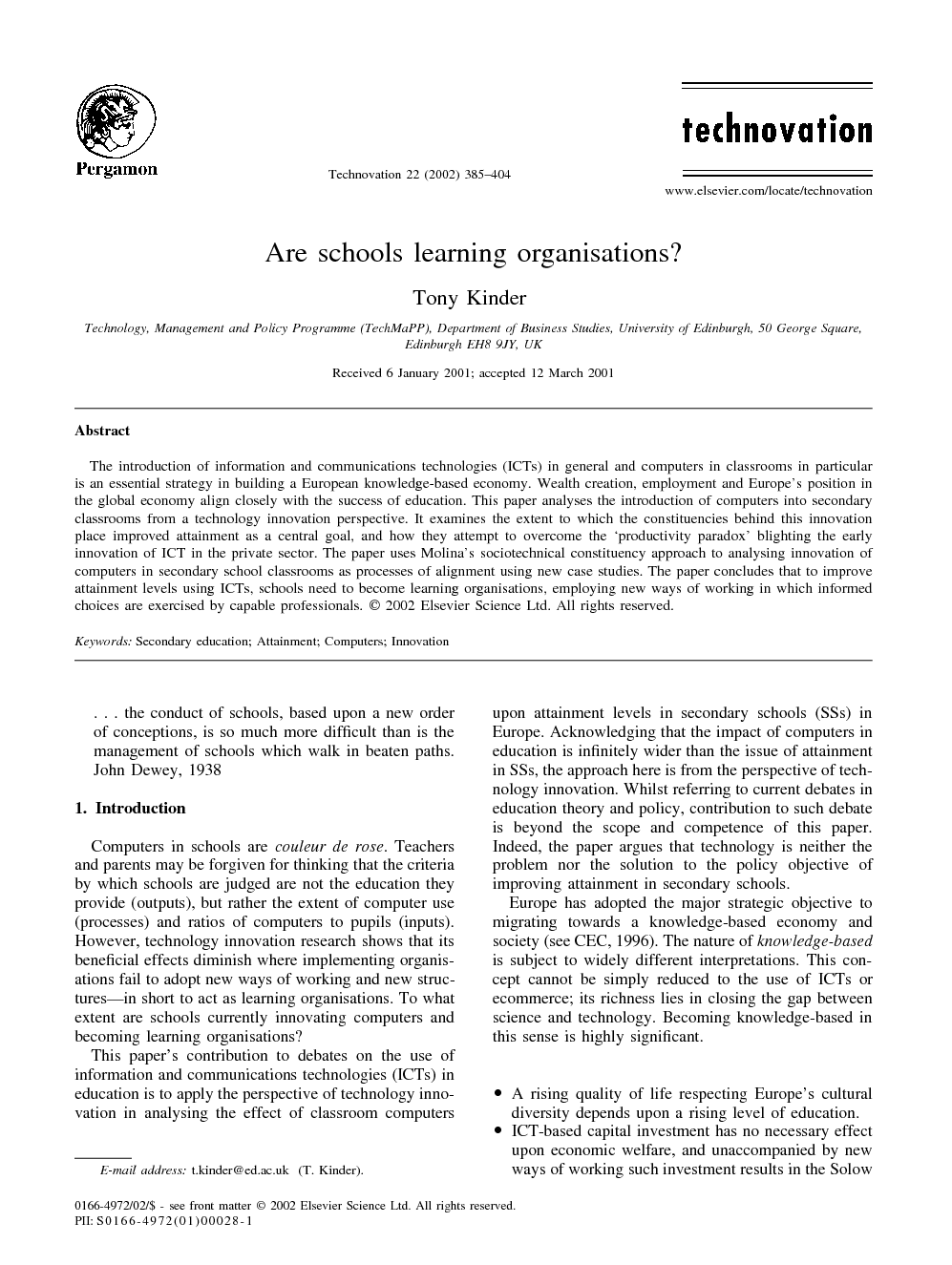 The introduction of information and communications technologies (ICTs) in general and computers in classrooms in particular is an essential strategy in building a European knowledge-based economy. Wealth creation, employment and Europe's position in the global economy align closely with the success of education. This paper analyses the introduction of computers into secondary classrooms from a technology innovation perspective. It examines the extent to which the constituencies behind this innovation place improved attainment as a central goal, and how they attempt to overcome the ‘productivity paradox’ blighting the early innovation of ICT in the private sector. The paper uses Molina's sociotechnical constituency approach to analysing innovation of computers in secondary school classrooms as processes of alignment using new case studies. The paper concludes that to improve attainment levels using ICTs, schools need to become learning organisations, employing new ways of working in which informed choices are exercised by capable professionals.

Computers in schools are couleur de rose. Teachers and parents may be forgiven for thinking that the criteria by which schools are judged are not the education they provide (outputs), but rather the extent of computer use (processes) and ratios of computers to pupils (inputs). However, technology innovation research shows that its beneficial effects diminish where implementing organisations fail to adopt new ways of working and new structures—in short to act as learning organisations. To what extent are schools currently innovating computers and becoming learning organisations? This paper's contribution to debates on the use of information and communications technologies (ICTs) in education is to apply the perspective of technology innovation in analysing the effect of classroom computers upon attainment levels in secondary schools (SSs) in Europe. Acknowledging that the impact of computers in education is infinitely wider than the issue of attainment in SSs, the approach here is from the perspective of technology innovation. Whilst referring to current debates in education theory and policy, contribution to such debate is beyond the scope and competence of this paper. Indeed, the paper argues that technology is neither the problem nor the solution to the policy objective of improving attainment in secondary schools. Europe has adopted the major strategic objective to migrating towards a knowledge-based economy and society (see CEC, 1996). The nature of knowledge-based is subject to widely different interpretations. This concept cannot be simply reduced to the use of ICTs or ecommerce; its richness lies in closing the gap between science and technology. Becoming knowledge-based in this sense is highly significant. • A rising quality of life respecting Europe's cultural diversity depends upon a rising level of education. • ICT-based capital investment has no necessary effect upon economic welfare, and unaccompanied by new ways of working such investment results in the Solow (1987) productivity paradox (see Krugman, 1999; Gordon, 1998; Gordon, 1999). • Europe has a job deficit of nine million (Larsson, 1999a, Larsson, 1999b, Larsson, 1999c and Larsson, 2000) and 600,000 ICT-related vacancies—this mismatch is only likely to be eradicated with improvements in the skill and attainment levels of labour-market entrants. • Developing economies are increasingly able to compete with Europe for jobs in less knowledge-intensive industries. • Old social structures replicate their divides even as they adopt new technologies. Thus, ‘blue collar blues’ may be replaced by digital Internets and ‘internots’ in a digital divide. • Regional peripherality and regional inequalities are barriers to European Community (EC) integration and may reduce with the aid of virtual technologies. Rising educational standards is therefore a highly significant policy objective and one highlighted by leading figures in Europe. Member states reserve the powers to finance, provide and control education.1 The CEC has encouraged co-operation in education using a panoply of programmes including Socrates,2 Minerva,3 multi-lingual projects under Leonardo and a range of IST and TAP projects.4 • The 1995–98 Educational software and multimedia task force involved 425 companies and institutions in 46 projects costing Euro 49 million. • The 1996–98 Learning in the Information Society action plan constructed the EUNet, a network of education networks, and promoted cross-border teacher training supported by member state education ministries. Fig. 1 indicates the wide range of education projects facilitated by EU programmes. This paper is not suggesting that the effect of ICT on a complex system such as school-based education can simply reduce to the single dimension of criteria of test passes (see Feinstein and Symons, 1999). No ‘quick-fix’ change is possible in a complex service delivery that is embedded deeply in institutional set-up and social structures—even a 10-year perspective on change may be ambitious. The processes whereby computers are introduced into schools are highly significant and the difference made to attainment is also significant.From the perspective of technology innovation, this paper begins by surveying literature relevant to this approach. Having outlined important lessons from non-educational areas of ICT innovation by public administrations, the paper examines the instructional modes, knowledge types and learning in SSs and identifies a range of important implementation issues for introducing computers into SSs. Referring to these implementation issues the principal methodological tool to be used in the paper, Molina's (1999) sociotechnical constituencies approach is outlined. The paper then discusses evidence on the difference computers make to pupil attainment in SSs. Going deeper into implementation processes, two case studies are presented (from West Lothian, Scotland, and Rome, Italy), before proceeding to analysis and conclusions.

This paper has positioned issues associated with introducing computers into classrooms within the context of building a European knowledge-based economy and society and the consequent objective of improving educational attainment. It has argued that introducing networked technologies into the multiple-goal learning environment of schools cannot be understood in terms of predetermined recipes. Rather, these are processes of sociotechnical alignment informed by particular knowledge domains and flows of knowledge, using particular instructional techniques embedded in software and curricula design and supported by specific mixes of technology. Evidence from research into PAs suggests that the content of sociotechnical alignment processes for ICT innovation is enriched by examining connectivity, interactivity and agility. The results of an analysis of the Rome and WL case studies shows that this approach highlights practical issues and choices facing policy makers and implementers—the constituency-builders. These issues and choices are summarised in Fig. 12 in terms of alignments necessary for the deployment of computers to result in higher pupil attainment. Both Rome and WL show elements of best practice from which later innovators can learn. However, in each case they regard themselves as continually innovating and edging towards ‘better practice’. In both cases it would be possible to erect an ‘ideal-type’ set of criteria from which to mount criticisms. After beating a new track, the pioneer can in retrospect often see a shorter route. It takes courage, however, to begin the journey. It is clearly important that change constituencies clearly include in their goals attainment improvement when laying out a vision and enrolling constituents. From the outset of the innovation processes decisions will be informed by this goal. Importantly, this is likely to affect the configuration and location of computers in the school, training of teachers, evaluation of software and alignment with ambient communications technologies. Provided the issues associated with these alignments are addressed, a clear-sighted constituency-building approach to introducing computers in schools is likely to beneficially affect attainment. These processes are best evaluated in a time-scale long enough to enable new ways of working, rules and structures to evolve—time to reveal the angel hidden in the marble.