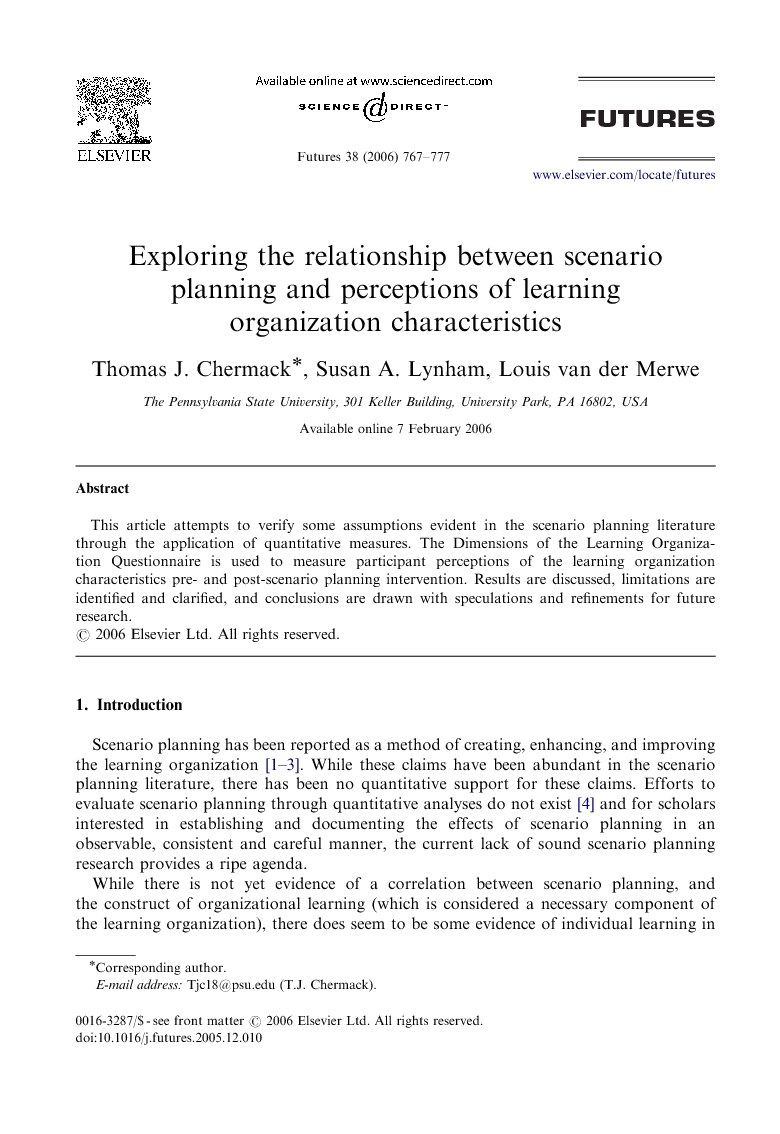 This article attempts to verify some assumptions evident in the scenario planning literature through the application of quantitative measures. The Dimensions of the Learning Organization Questionnaire is used to measure participant perceptions of the learning organization characteristics pre- and post-scenario planning intervention. Results are discussed, limitations are identified and clarified, and conclusions are drawn with speculations and refinements for future research.

Scenario planning has been reported as a method of creating, enhancing, and improving the learning organization [1], [2] and [3]. While these claims have been abundant in the scenario planning literature, there has been no quantitative support for these claims. Efforts to evaluate scenario planning through quantitative analyses do not exist [4] and for scholars interested in establishing and documenting the effects of scenario planning in an observable, consistent and careful manner, the current lack of sound scenario planning research provides a ripe agenda. While there is not yet evidence of a correlation between scenario planning, and the construct of organizational learning (which is considered a necessary component of the learning organization), there does seem to be some evidence of individual learning in the scenario planning experience although none of it is documented in a rigorous or careful manner. Many authors have based their work in cognitive psychology, and specifically, in the concept of mental models [2], [5], [6], [7] and [8]. This work is also generally descriptive and conceptual and often refers to the classic Royal Dutch/Shell examples and cases [3] and [9]. These cases and descriptive examples have fueled larger claims that are unfounded according to academic research methods; however, they do spark interest in investigating the phenomena more closely. To be clear, while individual and organizational learning seem to be and are reported as intricate components of successful scenario planning, their relationships must be examined more closely. This article does not intend to be overly critical of scenario planning pioneers. On the contrary, let the work of these exceptionally creative and generative thinkers be acknowledged [2], [3], [5], [6], [7], [8], [9], [10], [11] and [12]. In addition, this article also argues that the time has emerged for more careful documentation of what contributes to the success of scenario planning and what contributes to its failure. Furthermore, this careful documentation might best be conducted through the use of academic tools that have been neglected thus far in the analysis of scenario planning projects.

The scenario planning intervention is associated with increased perceptions of organizational learning across the board. Six of the seven constructs on the DLOQ showed a significant change from pre- to post-test scores, five were significant at the p=.05p=.05 level and one was significant at the p=.01p=.01 level. For the variable “Continuous Learning” a t-score of 2.913 was returned (p<.05) indicating a significant difference in pre- and post-scores. There have been considerable claims in the scenario planning literature that the process is based on an idea of continuous learning. Our data does seem to support this claim overall, however, the limitations of a small sample size are unavoidable. “Dialogue and Inquiry” also increased (SD .93) and was found significant (p<.05). Kolb's [28] learning loop is frequently cited as a relevant model to represent how leading scenario thinkers suggest that learning takes place throughout the exercise. Van der Heijden [2] has also published theoretical work on the espoused purposes of scenario planning, one of which he claims is to engage the organization in continuous learning practices. There is also considerable support for the significant findings with regard to dialogue and inquiry. Dialogue is the primary means through which scenario planning occurs, as it is largely an exercise in communicating points of view. Georgantzas and Acar [1], van der Heijden [8], Schwartz [11], Wack [3], Ringland [29] and Senge et al. [32] have linked scenario work to that of Bohm [30] and expressed that dialogue and inquiry are the primary means through which mental models are revealed and changed. The variable with the most significant increase in score was “Team Learning” (SD 1.02; t=2.50; p<.05) which is not surprising given the close interpersonal and team learning requirements of scenario planning. Team learning is also a critical component argued in the scenario literature [32]. Because the people involved in the scenario process are so critical to its outcome, the scenario team should be assembled very carefully, often involving outside thinkers referred to as “remarkable people” (van der Heijden, 1997 [8]). “Empowering People” was a significant construct (t=2.13; p<.05) and some theoretical work has supported the assumption that scores on this construct would increase [3; 9] “System Connections” was a significant construct (t=2.52; p<.05) and this significance may demonstrate the close link between the kind of thinking required in scenario planning and popular system theory. Scenario work is clearly based in systems thinking as most any of the prevalent books and articles on scenario planning refer to the work of Senge [32] and his considerable contributions to the systems literature in organizational contexts. It is also possible to see this link in the Fifth Discipline Fieldbook [32], which is published as a guide to organizational learning and contains numerous articles by leading scenario thinkers. Finally, “Leadership” was a highly significant construct (t=4.59; p<.01) which may verify assumptions and anecdotes that scenario projects require top-level support or they usually do not have much impact. The construct that did not return significant results was “Embedded Systems”. More specifically, the description of these constructs from Watkins and Marsick [19] are as follows: “Both high- and low-technology systems to share learning are created and integrated with work; access is provided; systems are maintained” (p. 139). There is minimal mention of this construct in the scenario planning literature. While scenario planning itself is viewed by some as a technology for sharing learning, few companies use scenario planning on an ongoing basis. Van der Heijden [2] discussed four purposes of scenario planning—one of which was scenario planning as a continuous learning tool. He also suggested that few companies use scenarios for this purpose, but that it was possibly the use with the greatest potential impact on the organization. It is extremely important to note that while there are numerous writings that support the findings of this small study, none of these writings draw on empirically analyzed data. Some case studies have produced valuable insights into how the process of scenario planning works, but not in a way that allows us to generalize to the majority of scenario exercises. And so this study attempts to provide a first step in studying scenario planning in a manner that aims for this kind of generalization. Of course, there are some serious limitations that do not allow this study to attain a level consistent with such generalization. Overall, we can conclude from this study that the link between scenario planning and organizational learning requires additional study. While our findings might be insightful, or aid in the design of future studies to elaborate on our suspicions that these two phenomena are closely linked, our small sample size limits the data in ways that prevent even the smallest of generalizations. However, we believe that the existing lack of quantitative research studies pertaining to the effects of scenario planning is a detriment to the development of the process and its legitimization as an effective organizational intervention. It is in this spirit that we provide our results and hope that they may lay the foundation for future studies that go beyond theoretical of conceptual contributions to the development of scenario planning practices.