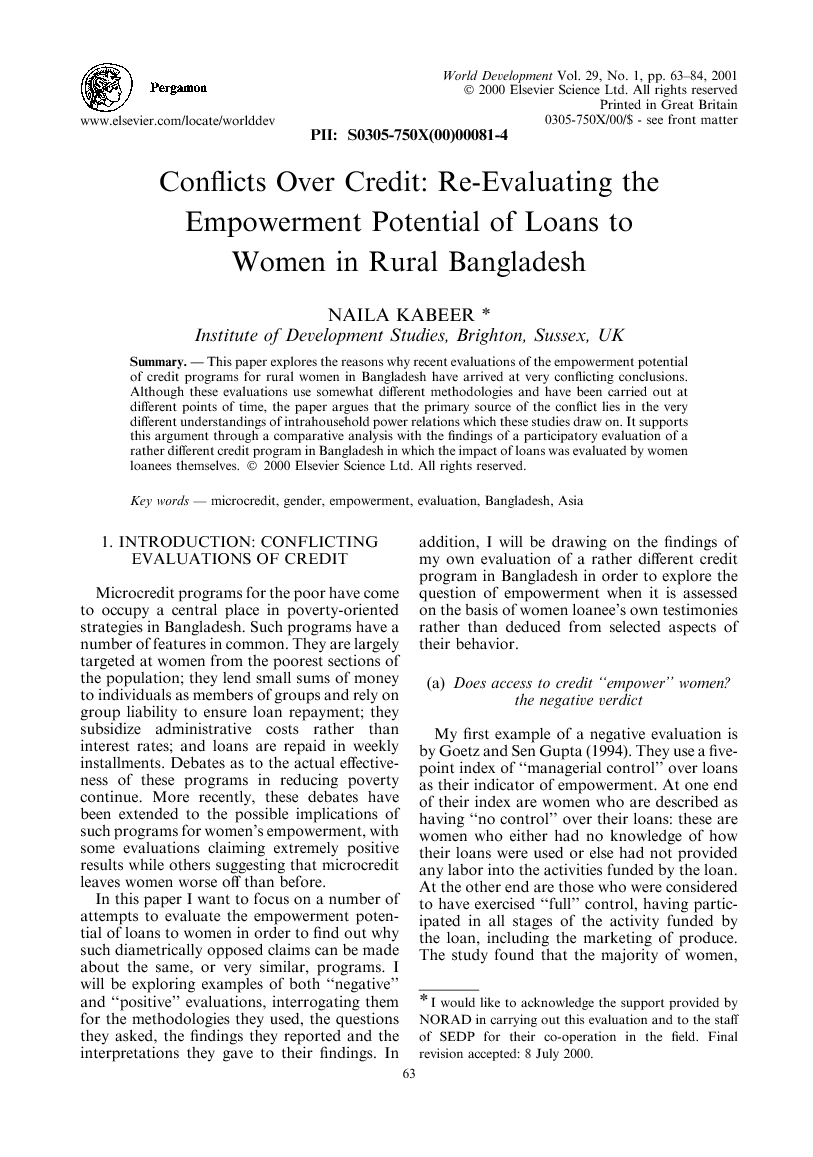 This paper explores the reasons why recent evaluations of the empowerment potential of credit programs for rural women in Bangladesh have arrived at very conflicting conclusions. Although these evaluations use somewhat different methodologies and have been carried out at different points of time, the paper argues that the primary source of the conflict lies in the very different understandings of intrahousehold power relations which these studies draw on. It supports this argument through a comparative analysis with the findings of a participatory evaluation of a rather different credit program in Bangladesh in which the impact of loans was evaluated by women loanees themselves.

Let me conclude by making a general point about microfinance and women. While the recent questioning of the empowerment potential of loans to women helps to counter the earlier, somewhat single-minded preoccupation with “repayment rates,” the recommendations which come out of the more negative evaluations cited in this paper carry the danger of overloading microfinance organisations with empowerment-related goals to the extent that their ability to deliver effective and sustainable financial services is likely to be seriously undermined. This point is made more generally by Rutherford (2000) who suggests that many NGOs promoting microcredit in the South Asian context have failed to develop effective financial services for the poor “because they are not primarily interested in financial services but in much wider social issues” (p. 9). There are multiple rationales for lending to women, apart from empowerment. The fact that women are much more likely to share their loans with male household members than men are with women, in my view, merely strengthens the argument for lending to women. The entire family is much more likely to benefit economically, and women are much more likely to benefit personally and socially, when loans are directed at women rather than men. Loans to men do little to challenge the internal gender inequalities of households, and indeed appear to reinforce them by giving men an affordable base from which to prevent their wives from engaging in their own income-earning activities. There are other arguments as well. It is one of the injustices of the way that society is organized in Bangladesh that extremely able women, even those from better-off households, are unable to realize their entrepreneurial potential because their gender acts as a barrier to gaining access to the necessary resources. Men, even poor men, have always had more choices in terms of accessing economic opportunities than women from an equivalent class. Women's higher repayment records do not merely reflect their socialized compliance in the face of the instrumentalist authority of NGO or government officials, as the more negative evaluations tend to suggest, but also the compliance which comes with having few choices. If purposive interventions can help to direct resources to women, thereby overcoming past barriers which have led to the suppression of their entrepreneurial potential, then they must be welcomed on grounds of efficiency and equity. If greater efficiency and equity help to lay the grounds for women to tackle other aspects of injustice in their lives, then we will have found a different and perhaps more sustainable route to women's empowerment.