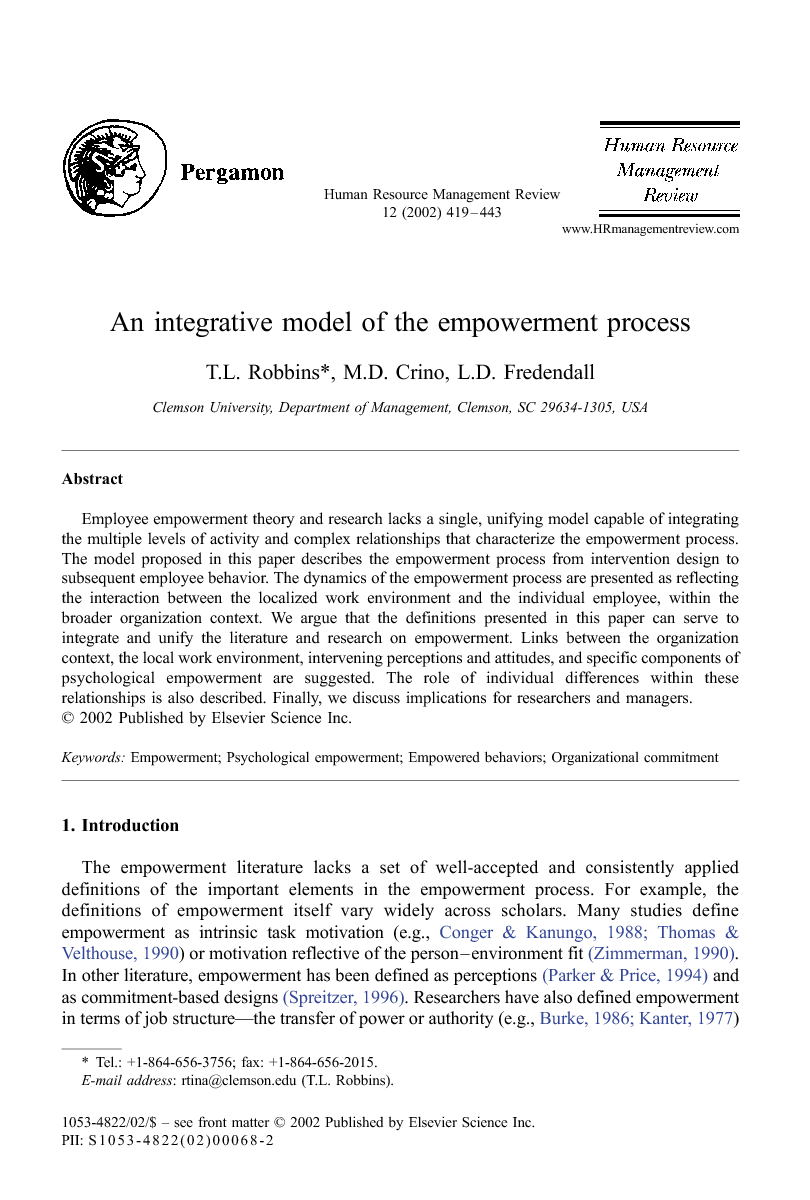 Employee empowerment theory and research lacks a single, unifying model capable of integrating the multiple levels of activity and complex relationships that characterize the empowerment process. The model proposed in this paper describes the empowerment process from intervention design to subsequent employee behavior. The dynamics of the empowerment process are presented as reflecting the interaction between the localized work environment and the individual employee, within the broader organization context. We argue that the definitions presented in this paper can serve to integrate and unify the literature and research on empowerment. Links between the organization context, the local work environment, intervening perceptions and attitudes, and specific components of psychological empowerment are suggested. The role of individual differences within these relationships is also described. Finally, we discuss implications for researchers and managers.

Empowerment interventions have become very popular, so much so that the 1990s have been hailed as the “empowerment era” (Hardy & Leiba-O'Sullivan, 1998). A recent international survey (Sparrow et al., 1994) suggests that representatives from firms all over the world (including the United States, United Kingdom, France, Japan, Korea, South America) perceive that the usefulness of empowering employees in order to gain a competitive advantage is increasing. While some of the interventions have been considered successful by companies, many others have not (e.g., see Hardy & Leiba-O'Sullivan, 1998 and Thorlakson & Murray, 1996). Many uncertainties exist regarding the process by which empowerment might contribute to increased organizational performance and as a result, recommendations concerning the implementation of the empowerment process are limited. Some argue that implementing empowerment programs are decisions made on faith since there is no clear data supporting its effectiveness. We believe that integrative models incorporating multiple levels of analysis are needed in order to make theoretical, as well as empirical advances in the empowerment literature. As proposed earlier, we must be able to relate important antecedents (i.e., perceptions and attitudes) of psychological empowerment (individual levels of analysis) to changes in the local work environment (work unit level of analysis) and historical and cultural influences that make up the organizational context (organizational level of analysis). In this paper, we have proposed specific links between the organization context, the local work environment, employee perceptions and attitudes, and specific components of psychological empowerment. We suggest that the links proposed in this paper can serve as a guide for directing research in this area. We suggest that the framework presented in this paper can provide an improved practical understanding of the obstacles and likely paths to a successful empowerment process. In fact, the model proposed here may help to identify points where the process typically fails and consequently focus future research and managerial attention on these issues. For example, if employees are not psychologically empowered as a result of interventions designed to do so, the failure may be attributable to any one or more of a number of links in the process. Pertinent questions may include the following. Have historical and cultural influences in the organization context and practices in the local work environment produced the positive perceptions and attitudes that are antecedent to psychological empowerment? More specifically, have communication efforts, training, and local management actions produced perceptions of support that are consistent with the authority being transferred? Are performance evaluation, reward, and discipline systems perceived as fair and do they contribute to an atmosphere of trust? Has employee commitment been positively affected by information sharing and informal management practices? Are positive local elements being offset by negative influences of the broader organization context? If, even in the presence of sufficient degrees of psychological empowerment, empowered behaviors are not being exercised, might the failure be attributable to constraints within the organization context or local work environment? In sum, the framework presented in the paper can be used by both managers and researchers as an empowerment process blueprint and diagnostic framework and, in turn, provides important links between theory and practice.