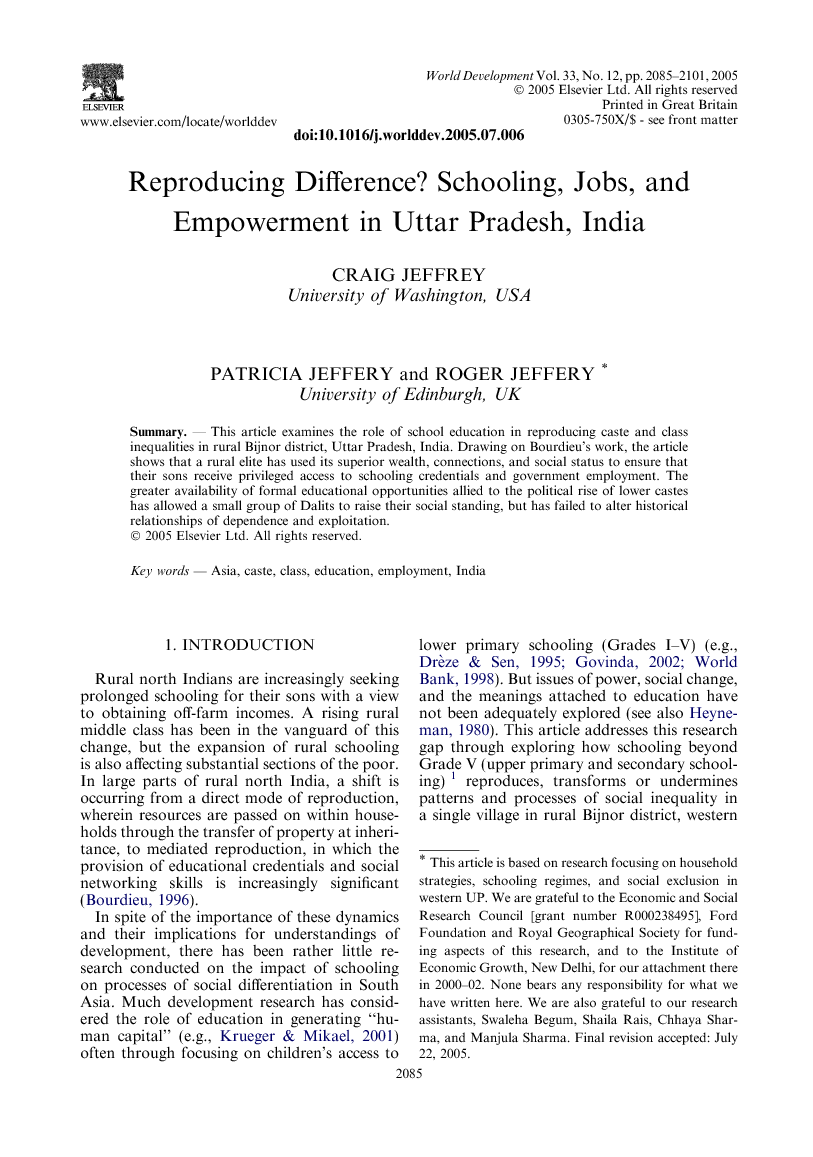 This article examines the role of school education in reproducing caste and class inequalities in rural Bijnor district, Uttar Pradesh, India. Drawing on Bourdieu’s work, the article shows that a rural elite has used its superior wealth, connections, and social status to ensure that their sons receive privileged access to schooling credentials and government employment. The greater availability of formal educational opportunities allied to the political rise of lower castes has allowed a small group of Dalits to raise their social standing, but has failed to alter historical relationships of dependence and exploitation.

Rural north Indians are increasingly seeking prolonged schooling for their sons with a view to obtaining off-farm incomes. A rising rural middle class has been in the vanguard of this change, but the expansion of rural schooling is also affecting substantial sections of the poor. In large parts of rural north India, a shift is occurring from a direct mode of reproduction, wherein resources are passed on within households through the transfer of property at inheritance, to mediated reproduction, in which the provision of educational credentials and social networking skills is increasingly significant (Bourdieu, 1996). In spite of the importance of these dynamics and their implications for understandings of development, there has been rather little research conducted on the impact of schooling on processes of social differentiation in South Asia. Much development research has considered the role of education in generating “human capital” (e.g., Krueger & Mikael, 2001) often through focusing on children’s access to lower primary schooling (Grades I–V) (e.g., Drèze and Sen, 1995, Govinda, 2002 and World Bank, 1998). But issues of power, social change, and the meanings attached to education have not been adequately explored (see also Heyneman, 1980). This article addresses this research gap through exploring how schooling beyond Grade V (upper primary and secondary schooling)1 reproduces, transforms or undermines patterns and processes of social inequality in a single village in rural Bijnor district, western Uttar Pradesh (UP). Drawing on field research conducted by the three authors in 2000–02, we argue that the expansion of upper primary and secondary education is reinforcing inequalities based upon caste and class in western UP while also allowing some Dalits (ex-Untouchables) to challenge established structures of power.2 The next two sections outline the political economy of schooling and employment in UP and the theoretical basis of our enquiry. Section 4 introduces the setting of our research and methodology. In Section 5, we explore the schooling and employment strategies of the locally dominant Jat caste and relatively marginalized Chamars (a Dalit caste) in Nangal village. We uncover the role of secondary schooling in entrenching rural inequalities based upon caste and class. Jats have been more successful than Chamars in the search for educational credentials and salaried employment. Section 6 focuses on the occasional success of educated Chamars in the search for government employment and the social implications of this mobility. Section 7 summarizes our argument and draws out the wider implications of our study for an understanding of social reproduction and development.

A rapidly liberalizing educational market in north India and routine corruption in the competition for secure salaried employment had allowed a rural elite in western UP to obtain privileged access to mainstream schooling and secure salaried employment. Jats had been relatively, but not wholly successful in obtaining valued secondary school qualifications for their sons. Most Chamars were either excluded from secondary school education altogether or received devalued credentials. There was therefore a mutually reinforcing relationship between forms of social advantage based upon access to educational facilities and salaried work and older forms of dominance rooted in control over land, access to urban social networks, and privileged position within the Hindu caste hierarchy. The greater availability of formal educational opportunities allied to the political rise of lower castes has allowed a small group of Dalits to raise their social standing, but has failed to alter historical relationships of dependence and exploitation. These points bear on wider debates on schooling and social reproduction and should be of broader interest to critical development scholars interested in understanding the social impact of education. The Bijnor case study provides a vivid example of education’s role in entrenching social inequalities (Bourdieu & Passeron, 1977) and questions accounts of education that blandly identify schooling as a “social good.” We have emphasized the key role of social networks and cultural capital, in addition to wealth, in shaping young people’s access to credentials and secure salaried work. Our research draws particular attention to the links between social and geographical mobility. Jats’ superior economic, social, and cultural capital in the fields of mainstream schooling and salaried employment competition is most clearly manifest in their capacity to develop social networks outside the village. The article has highlighted the need for further research into the roles played by educated Dalit elites, particularly those within government employment, in improving the standing of their community. We have suggested that educated Chamars used discussions of Jat “failure” as a basis for critiquing caste as an organizing principle in society and stressing instead the importance of education as a marker of status. Moreover, a few educated Chamar men within government employment sought to improve the standing of their caste through circulating images of Dalit political advance, establishing social organizations, and playing brokerage roles in people’s relationships with the local state (see also Krishna, 2002). Further research might explore the limits to these processes of social change, higher caste efforts to counter such advances, and the links between local political strategies and regional cultures of resistance. The article raises several issues that are of policy concern globally and more specifically within India.19 First, in stressing the importance of secondary schooling in access to employment, our research suggests that policy makers should seek to ensure higher school completion rates among subordinate social groups in addition to improving access to primary/elementary education. Second, our article underlines the need to integrate attempts to improve school enrollment with analysis of the quality of schooling and rural people’s perceptions of the value of education. Third, our account points to the potential value of linking programs aimed at raising educational standards to efforts at improving the employment opportunities of educated young people in India. Rapid changes in the structure of education and employment markets and the frequent gap between parental and young people’s experiences combine to prevent large sections of rural youth from acquiring knowledge of feasible career options, particularly within marginalized communities. More broadly, in demonstrating the inability of contemporary schooling to address equity issues, this article adds to calls for governmental and donor agencies to foreground issues of power and inequality in the design, implementation, and evaluation of educational initiatives.