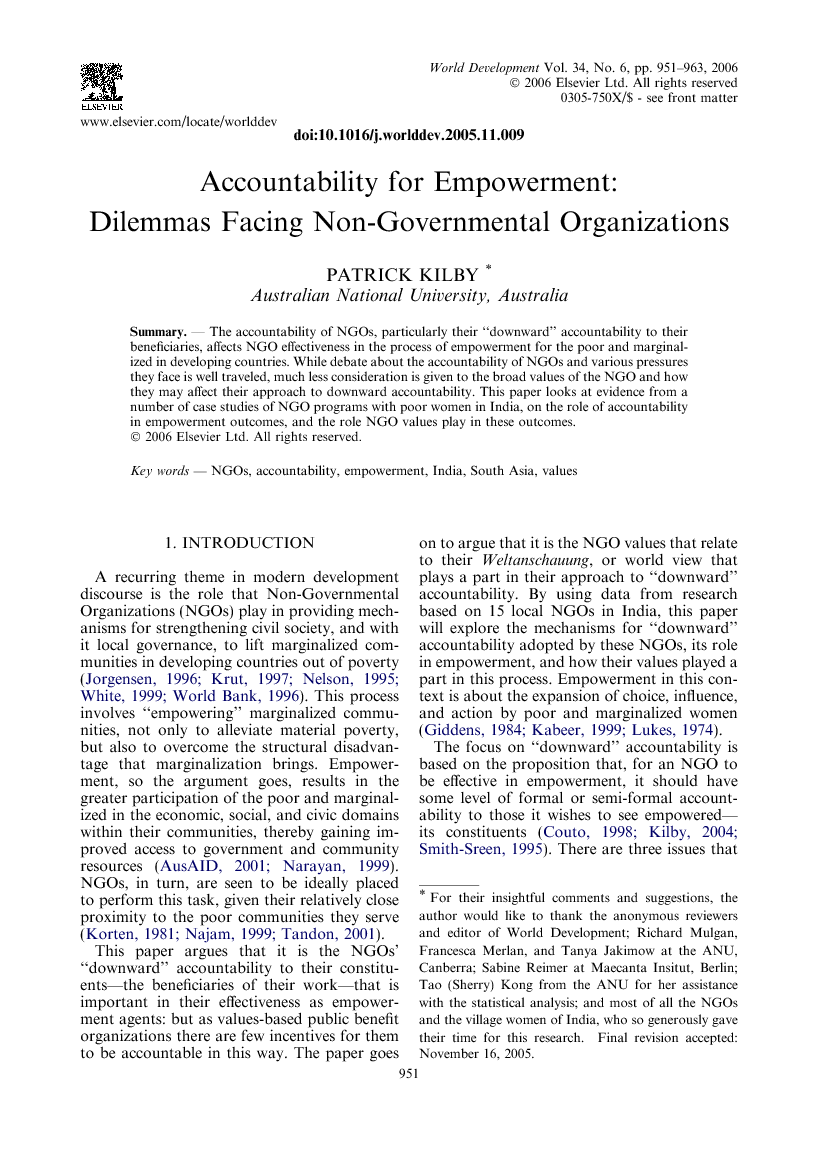 The accountability of NGOs, particularly their “downward” accountability to their beneficiaries, affects NGO effectiveness in the process of empowerment for the poor and marginalized in developing countries. While debate about the accountability of NGOs and various pressures they face is well traveled, much less consideration is given to the broad values of the NGO and how they may affect their approach to downward accountability. This paper looks at evidence from a number of case studies of NGO programs with poor women in India, on the role of accountability in empowerment outcomes, and the role NGO values play in these outcomes.

A recurring theme in modern development discourse is the role that Non-Governmental Organizations (NGOs) play in providing mechanisms for strengthening civil society, and with it local governance, to lift marginalized communities in developing countries out of poverty (Jorgensen, 1996, Krut, 1997, Nelson, 1995, White, 1999 and World Bank, 1996). This process involves “empowering” marginalized communities, not only to alleviate material poverty, but also to overcome the structural disadvantage that marginalization brings. Empowerment, so the argument goes, results in the greater participation of the poor and marginalized in the economic, social, and civic domains within their communities, thereby gaining improved access to government and community resources (AusAID, 2001 and Narayan, 1999). NGOs, in turn, are seen to be ideally placed to perform this task, given their relatively close proximity to the poor communities they serve (Korten, 1981, Najam, 1999 and Tandon, 2001). This paper argues that it is the NGOs’ “downward” accountability to their constituents—the beneficiaries of their work—that is important in their effectiveness as empowerment agents: but as values-based public benefit organizations there are few incentives for them to be accountable in this way. The paper goes on to argue that it is the NGO values that relate to their Weltanschauung, or world view that plays a part in their approach to “downward” accountability. By using data from research based on 15 local NGOs in India, this paper will explore the mechanisms for “downward” accountability adopted by these NGOs, its role in empowerment, and how their values played a part in this process. Empowerment in this context is about the expansion of choice, influence, and action by poor and marginalized women ( Giddens, 1984, Kabeer, 1999 and Lukes, 1974). The focus on “downward” accountability is based on the proposition that, for an NGO to be effective in empowerment, it should have some level of formal or semi-formal accountability to those it wishes to see empowered—its constituents (Couto, 1998, Kilby, 2004 and Smith-Sreen, 1995). There are three issues that NGOs face in being downwardly accountable: first, they are generally not required by law or regulation to provide their constituency the necessary control for genuine accountability (Keohane, 2002 and Mulgan, 2003); second, the “required” accountability the NGO has to other stakeholders such as Government and supporters affects the “strength” of the accountability relationship they can have with their constituents (Edwards & Hulme, 1996); and finally, it is the broad values-base, the Weltanschauung, of an NGO that can determine the approach they take to “downward” accountability (Lissner, 1977). While most NGOs that work in development will argue that they are part of civil society, and can play both an empowering and representative role (Abramson, 1999, Gaventa, 1999 and Nelson, 1995), they generally are not membership based, governed, or financed (Fowler, 2000). Rather, these NGOs are largely guided and driven by staff, self-appointed Boards, or very small numbers of formal members; and the driver for their work emerges generally from a religious or ethical base—their values (Thomas, 2004). The role of these NGOs is in advancing what they see as broader community interests such as inter alia alleviating poverty, addressing marginalization, achieving social justice, and advancing human rights—i.e., they are public benefit organizations. The lack of a defined accountability path to constituents that a representative structure provides is the major weakness of Public Benefit Organizations ( Mulgan, 2003, Najam, 1996 and Salamon et al., 2000), and leads to an “accountability gap” (Salamon et al., 2000, p. 9): in the final analysis “downward” accountability is discretionary and little more than “grace or favor” (Mulgan, 2003, p. 137). That is, while NGOs purport to represent the interests of their constituency, such as advancing the cause of the poor and oppressed, there is no clearly defined path by which they can be held to account by that constituency (who have little power in the relationship) in how they represent those interests (Najam, 1996). This paper first examines NGOs and their values-base, with Section 3 going on to look at the accountability processes NGOs face, focusing on NGO accountability to their constituency; Section 4 examines these processes in practice through case studies from India; and finally, Section 5 draws together the findings and points to policy and practice implications for NGO programs.

This paper has focused on two propositions: first, that “formality” and “depth” are ways of measuring “downward” accountability, which in turn is correlated with strong empowerment outcomes; and second, the broad Weltanschauung values of an NGO have a strong effect on if and how this “downward” accountability occurs. None of the NGOs surveyed was surprised with the finding that accountability to the constituents was a significant variable in empowerment. However, the dominant view among the NGOs was that a large shift in accountability toward the constituency would weaken their control over programs, creating tensions, and divert the NGO away from their broader constituency and public benefit role, in order to serve a narrower membership base. The fact that three NGOs did have active formal processes in place with little detrimental effect on their role as public benefit organizations demonstrated that these risks are not as great as suggested. This paper argues, however, that informal accountability processes are insufficient and at best link the NGO instrumentally (that is through its work), but not structurally, to their constituency (Fox & Brown, 1998); or in a way that leads to strong empowerment outcomes. The findings of the research support the view that more structural (formal) links deliver stronger empowerment outcomes, supporting Joshi and Moore’s (2000) argument that the presence of formal processes establishes a right for the constituents, and therefore is empowering—that is, there is an opportunity for “rectification” or being able to impose a cost, albeit a small one. This research finding generally supports the view that NGOs see themselves as being primarily values-based public benefit organizations (Edwards, 1999, McDonald, 1999 and Tandon, 1995). However, it is generally those NGOs with values that reflect a strong sense of solidarity with the poor and marginalized that have strong empowerment outcomes within their constituency. Accountability is important for these NGOs, but not in the ways that much of the current literature perceives it (Charlton and May, 1995, Edwards and Hulme, 1996 and Zaidi, 1999). The NGOs in this study saw their accountability obligations in a complex way, and to varying degrees highlighted the three prime accountabilities: to values, to the work, and to their constituencies (Tandon, 1995). The research findings have raised an important issue: for many of the NGOs in the study they were accountable through their work, which in turn was an expression of their values; but only a small number had explicit mechanisms for being accountable to these values. This lack of accountability to values can leave NGOs vulnerable, as those accountability pressures that require specific mechanisms can be privileged, leading to an erosion of the broader values, and so weaken relationships with constituents. On the other hand, if the values are not based on some form of solidarity, then developing downward accountability mechanisms likewise will be difficult. Najam’s (1996) suggestion of developing a paradigm where both parties (NGOs and constituents) “are both clients simultaneously” to each other (p. 347) may be an ideal with SNDT being a prime example; however, “legislating” for such an approach is another matter. Further work is required in the area of program management theory to identify mechanisms for the development of formal or semi-formal accountability structures to provide the NGO constituency a greater sense of ownership—and therefore power—in the program while maintaining the flexibility of the NGO to expand their work to new communities. The examples of SNDT and Gram Vikas indicate that this is possible. Joshi and Moore (2000), however, caution that it is an exceptional organization that can do this. Second, the world view or Weltanschauung of an NGO has to reflect the necessary views of constituencies so that they are genuine and comfortable with the openness implicit in “downward” accountability mechanisms. From a policy point of view, there is a strong argument for a re-examination of the accountability relationship of NGOs to move the debates away from the accountability to their donors and supporters toward looking at workable mechanisms to ensure accountability to their constituency in a way that enables them to be true to their values while at the same time ensuring that their constituencies can engage more fully in the development processes that affect them. This is an important area for both policy work and NGO discourse, if empowerment programs are to meet the real objective of the poor being able to challenge power relationships at all levels in their lives.